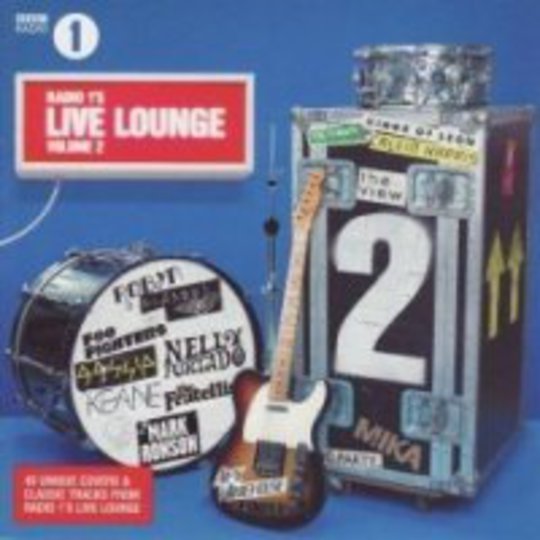 Yippee! Radio 1 is forty! And it gets worse with every passing year!

Oops, sorry, I'm supposed to be reviewing this double CD compilation... not the station. Okay. These tracks were all recorded in Jo Whiley's Live Lounge ("one of the highpoints" of her show, the press release helpfully informs me) and are either the artists' own popular tracks, or covers, performed with minimal accompaniment.

There's not really much to talk about on the originals front. The Fratellis? No thanks, although with the stripped down 'Chelsea Dagger' it's a case of less being more bearable. Calvin Harris... ditto. If you didn't like the song in the first place, then, chances are the 'reinterpretation' won't do much for you because few of these really take any risks. And if you do, guess what? You will.

So: Kings Of Leon, Robyn (this girl can sing), Dizzee Rascal, Klaxons = good. And The Gossip (I don't even need to tell you the song) are still as annoying as ever. That's the first CD; the second is slightly more daunting. James Morrison, Maroon 5 and Damien Rice - to name but three - all re-imagining their chart-friendly wares. Feel sick yet? Me too. And whoever decided giving Jack Peñate a record deal was a good idea should be forced to listen to Mika's 'Grace Kelly' on repeat until their head explodes. Two and a half times, my guess.

The covers are where things really get 'interesting'. Again, it's a game of two halves. The general rule seems to be the more ambitious/ridiculous, the better. If you're going to do a cover, you might as well at least attempt something different from your own style and try to make it your own.

To that end, Maximo Park manage the difficult feat of making The Proclaimers' 'I'm Gonna Be (500 Miles)' sound exactly like every other Maximo Park song. Whether that's a good thing or not, I can't quite decide. Similarly, Arctic Monkeys put their own stamp on Wino's 'You Know I'm No Good' and Biffy Clyro do an admirable job with this summer’s smash hit 'Umbrella'.

There are exceptions to the rule stated above, and they tend to apply when the act in question is just too awful to make songs they've written their own, let alone stake a claim on anybody else's. I'm talking here about The Enemy trying to 'do' Madonna, as it were. Perhaps if they'd stuck to running through Jam numbers...

Similarly, the idea of the fat bloke from Keane sweating his way through 'Dirrtylicious' (yes, a Aguilera/Destiny's Child mangle) is only slightly less abhorrent than the reality. Hearing him ask whether his body is too bootylicious made me vomit internally. And then press 'stop'.

Another mistake is allowing Natasha Bedingfield near a microphone, particularly when she's attempting to cover a Snow Patrol 'classic'. 'Chasing Cars'? Chasing ambulances more like. Paolo Nutini commits similar atrocities with 'Rehab'. I don't even want to talk about Mark Ronson.

Basically, if you're a fan of Whiley and her show, you'll probably enjoy this collection. Indeed, it might make a great Christmas present for your younger sibling or partially deaf elder relative. Me? I can safely say I'll never listen to it again. Happy fucking birthday, Radio 1.