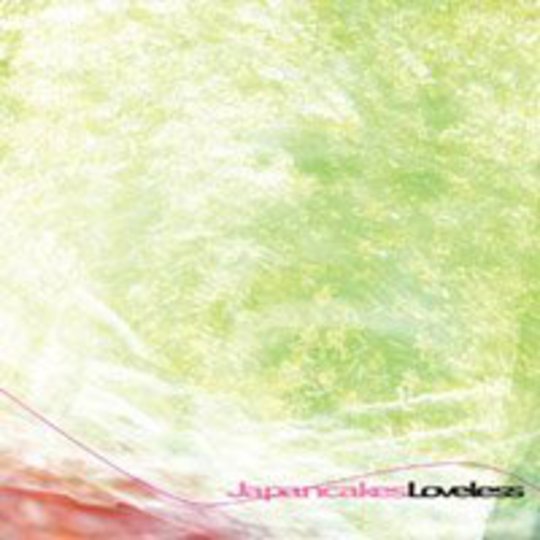 Japancakes? Really? How cute! Covering My Bloody Valentine's Loveless in its entirety? That is just as sweet as a button made of peaches held in Paddington's marmalade-sodden paw while Harry Corbett operates the whole scenario. The simple premise here is that the brilliantly/terribly named Japancakes 'do' MBV's magnum opus without the distortion pedals and Kevin Shields' voice – surely at least a novel experiment. It turns out to be surprisingly nice if you're not terribly familiar with the original and, even if you are, there are still some interesting corners to discover.

Though these interesting corners are quite pleasurable when you find them (the bob-bob bass of 'Come In Alone', for example, is notably more accentuated than the original recording), the main pleasures on this Burton-esque re-imagining are actually the work of the parent version. Sadly, there's a big neon light hanging over Loveless that, unstoppable in the murk of the shoegazer's favourite time (the night-time), saying "Novelty". And buzzing. While it rains. It's difficult after the initial "Oh yeah, I LOVE this song!" of 'Only Shallow' to not then realise that you miss all the fucking noise and all the fucking Kevin Shields as well. If this release is an attempt to say that you don't need distortion to make these songs sound good, then it's only winning half the time. Don't you understand, Japancakes? These songs need to be loud and distorted! No-one's bowels have ever been involuntarily called into early deployment at an acoustic Americana show (I think), and that's what we want from MBV.

We're somewhat resigned, then, to labelling Japancakes' bizarre experiment as a curio. Curios, it seems, are Japancakes' business – previous outings have featured the same chord held for 45 minutes a la Terry Riley (who some might argue never clambered out of John Cage's shadow anyway), and the band record all their individual parts at different sessions to one another, supposedly to venture forth more individuality on the part of each member. This, in the context of self-penned material, might be a nice idea, but ultimately doesn't hold water as much as the actual writing process – forced ideals of musical expression masquerade unsuccessfully as enhanced individualism. So in the context of this thin concept, it is rendered moot. Though Loveless is not without its charm and brilliant moments, it is stunted, even doomed, by the charm and brilliant moments of My Bloody Valentine.