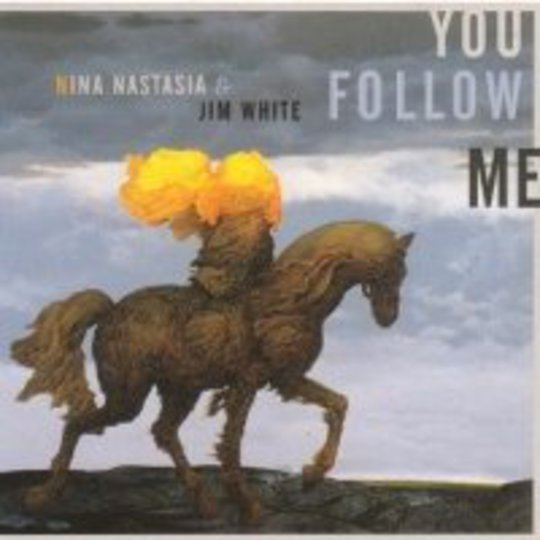 Nina Nastasia is a beautifully incidental songwriter; her lyrics read not as narrative, but as convulsed snapshots of particular moments, or thoughts. Almost uniquely among her contemporaries, she has a gift for almost stark condensation; of the 16 tracks on 2002’s The Blackened Air only three were over four minutes long. Which is, considering what an engaging, complex songwriter she is, slightly unbelievable – you get the feeling she never went through a musical latency period, emerging fully formed and adult. Take all the lyrics of ‘The Very Next Day’ (from the aforementioned record), itself only half a minute long: “The very next day / All the leaves came undone / In the cool, fall sun / We looked down from the roof” – that’s _it_. Sometimes, with Nina Nastasia, what matters isn’t so much what’s said, but what’s left unspoken.

Even so, at first glance, it seems strange to see a songwriter of her stature paired on equal billing with a drummer who, after all, contributed heavily to her last two records anyway - last year’s stripped-down and beautiful On Leaving and 2005’s heavily instrumental Run To Ruin. All the more so because, outside of noise/avant music (Chris Corsano, Zach Hill, Brian Chippendale), drummers are only occasionally recognised as anything other than an accessory, a means to an end. Yet, if it was going to be anyone it would be Jim White**, already an integral part of three-piece post-rockers Dirty Three, as well as part time collaborator with Will Oldham and Low, among others. For anyone at the Dirty Three ATP earlier this year, White emerged as the linchpin of the whole festival, appearing alongside Cat Power and Tren Brothers, almost an ever-present onstage over the weekend.

Indeed, White’s talents are unique, posing a peculiar flexibility that allows him to contribute to a record without seeming imposing; his drumming both compliments the song, be it Nastasia’s or Oldham’s, and slyly builds on it. He’s particularly suited to Nastasia’s style of songwriting, sparse as it is. You Follow Me is very much a collaboration, White’s drums brought up in the mix to a level footing with the guitar and the vocals, with almost all the tracks written specifically with the record in mind. As such, White’s drumming is given room to breath, throwing in little flourishes that would have been impossible on Nastasia’s earlier albums.

Opener ‘I’ve Been Out Walking’ takes on a haunting, menacing, martial aspect as the drums gradually build pace, pounding out a staccato, breathless heartbeat behind Nastasia’s aching, alluvial lyrics, “What will become of me father / I was already a liar / now I’m done for sure”. ‘I Write Down Lists’ is even more frustrated, almost angry, the song slowly coming into life after two failed attempts. Throughout, Nastasia does sound angry, even aggressive at moments; as never before, on You Follow Me she sounds frustrated, occasionally hateful, bitter. Nowhere more so than on ‘The Day I Would Bury You’: “I wanted to tell you… how much I blame you / How hard this has been… I always dreamed of the day I would bury you”.

Extraordinarily there’s no song here over four minutes; the album itself is barely half an hour long. How incredible then that so much emotion could be expressed in such a short space of time, something that would have been impossible without White’s, gentle, complimentary drumming. The one song that does touch on the four minute mark, ‘Late Night’, is also the most emotive, the most strained, maybe even the most striking song Nastasia’s ever written. “There’s blood on the road / Blood on your face / I’m going to cry, cry”. When she wails at the end, “I may be the one to save you”, you can hear her voice, impassioned and desperate, softly echo against the studio walls.

Steve Albini seems to perfectly understand the need to let the pace of the music speak its own story, to allow Nastasia’s wonderfully rhythmic songs to flourish by themselves, with White’s drumming highlighting everything that’s being said, and what’s left to silence. Strangely, the standout track, ‘Our Discussion’, is the only song not written for You Follow Me, originally being a collaboration with Boom Bip. Here Nastasia, as elsewhere, deals with both the confusion and the hope to be found in human contact, the almost holy communion of elliptical moments of intense desire, frustration and fulfilment: “I don’t believe in a God or the mind / But I’m not alone”. If we’re to take anything from You Follow Me, it’s that words aren’t everything; sometimes what’s happening in the background, below the surface, can be just as important.