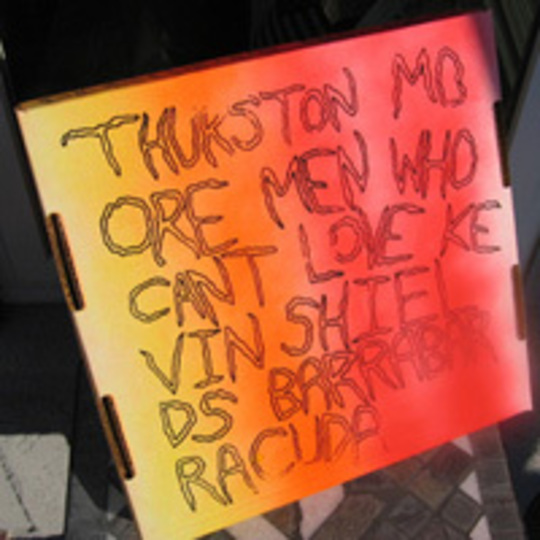 Densely does it. As elaborative goes, Deathbomb Arc have pulled out the stops here. Sat on doorsteps basking in its own hyper-colour majesty, Thrash Sabbatical has imposed itself upon you even before a cart has even been laid down on this raucous LP/2x7” collection of noise mongering, housed in an awkward cardboard box designed by LA outfit Not Not Fun. Thurston Moore pairs up and holds hands with three different LA noise acts with Eva Aguila’s confusingly monikered Kevin Shields, the boisterous tag team making up Men Who Can’t Love, and the girl-gang yobbery of Barrabarracuda all content to hold out a mitt.

After Trees Outside The Academy opened up insecurities, Thrash Sabbatical sees Thurston Moore return back to brat as sonic landscapes of noise are gnawed away at by cacophonous assaults of jerking electronics. Heads may turn at the fact that this is Moore showcasing his inward indulgences but for those that can cut through the shitstream of noise and through to the heart of ‘Creamsikkle’ lie vicious waves of electronic noise pining for attention as brutal bouts of vacuous noise chime like brick on brittle bones. It resonates with the same hollow vigour that HEALTH recently embroiled for their signature hardcore and the explosive experimentalism of Black Dice’s dance-orientated avant-garde but still firmly sat in his usual sandpit of distortion.

Ever wanted to stick your head in a volcano? Don’t bother. Where Moore provides one curtailing track on his side of the 12”, Men Who Cannot Love - made up of various artists from the LA district - offer up six. Innocently opening with Solitary Hunter’s harmonious lo-fi folk, such modesty soon gives way as magma floods eardrums as Impregnable’s ‘When Your Nights Get A Little Colder’ erupts like a natural disaster sifting through the cranium. Entertaining showcase and all but as plates slowly turn and move through the motions it remains pretty static. While MWCL are obiovusly not bereft of ideas it’s that one fails to impose itself over another. As attentions wane Privy Seals eponymous effort peters out with the last spits of molten granite, minds scolded but in tact.

As Thurston changes tack and offers up the unassuming noise-folk of ‘Petite Bone’, Barrabarracuda put you back in the school playground. Clambering up from the cut knees Men Who Cannot Love knocked you down onto, the incessant chant of “You are such a jerk” is spat out as ‘Stone Cold Steve Austin at the Cold Stone Creamery’ descends into a tear-battling belittling. Made up of individuals from various equally dysfunctional acts (Child Pornography, Pochahaunted) Barrabarracuda make with the oikish riot grrl posing of fellow LA cohorts Mika Miko and the noise-pop frolics of Deerhoof playing with half-rotten equipment.

LA noise merchant Kevin Shields (not of any relation to the MBV statesman) is joined by Gang Wizard’s Amy Vecchione for her contribution in the unfathomably boneless no-wave of ‘Paved Fury’ and ‘Motor Hands’. Neither particularly overwhelm and, ending rather abruptly, are gone before the industrial scrawl has really makes an impact. Given we’re struggling to see where Deathbomb are seeing the “angelic harmonies for a tension that evokes pure joy” perhaps, instead, try out the equally grating but far more imposing Cavity Fever for Kevin Shields in full unabashed swing. Sat on the other side of the 7” is another Moore effort in ‘Unzipped’, churning methodically and recognisable as an incarnation of ‘Noise Among Friends’ from Moore’s most recent record that fails to stand up on its own. As the centrepiece to it all Moore’s efforts, as engaging as they are unlistenable, drift with a lack of focus, more idle-minded cast-offs than a structure to base things round, which is disappointing given the general care that has obviously gone into the release.

Thrash Sabbatical is a sour mouthful that will sit bitter on most tongues. It’s not without charms but with only occasional short-fused glimpses of inspiration this is unlikely to yield much of an appeal outside the clambering hands of noise aficionados. Rather, a nicely packaged headache.