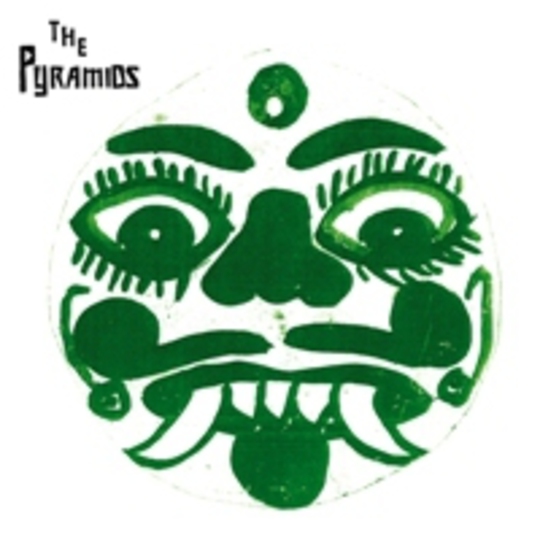 After sessions for Derdang Derdang came to a close, Archie Bronson Outfit’s The Cardinal (Sam Windett) and Arp (Mark Cleveland) were left with an insatiable desire to spin out, with whetted tongue unsatisfied. In absence of Dorian Hobday from the usual roster, The Pyramids were formed, an act who, with the stark insistence of The Monks, let Archie Bronson Outfit’s psychedelic tendencies rear up. As a barren air raid siren pine opens events a methodical drum beats against ‘Pyramidy’'s scything psych introduction and rarely lets up as this eponymous release descends into a relentless tirade of squalid brilliance.

Recorded in a converted barn below dusty beams in the Berkshire countryside, amid The Cardinal’s cries of “Hunch Your Body!” the record sounds with a rural detachment, deranged with mild-mannered madness, as ale soaks the skull and quells a hollow-hearted heartbreak. Harping with its usual delirium-induced bawl Windett’s vocal delivery is unsettlingly on edge as the disorientating ‘White Disc Of Sun’ cuts in with the pent up vigour of ABO’s previous lust-laden ventures.

More so than with Derdang, The Pyramids is a bleak outing, austere in its approach as ‘Piblokoto’ echoes hysterically with nihilistic shrieks. Interspersed with the calming instrumental ‘Guitar Star’ things are immediately dragged back up by the collar as ‘A Gala In The Harbour Of Your Heart’ pants with a raucous insistence, as the “play one, write one, give it to Head” approach to recording pays dividends.

Rarely with a let up, this is both the making and undoing of The Pyramids. While not far from the usual Archie Bronson outing it lacks the dexterity and craft that Derdang Derdang used to soundtrack its yearning glands as more a persistently lecherous grope than a snide touching up. But rather than the usual dregs from the barrel such projects tend to showcase this is far from tawdry ABO spill-over. As bones are melt down for kicks as ‘Glue You’ closes with psychopathic tendencies on show, The Pyramids is a satisfying pinch of the arse and fist to the gut.