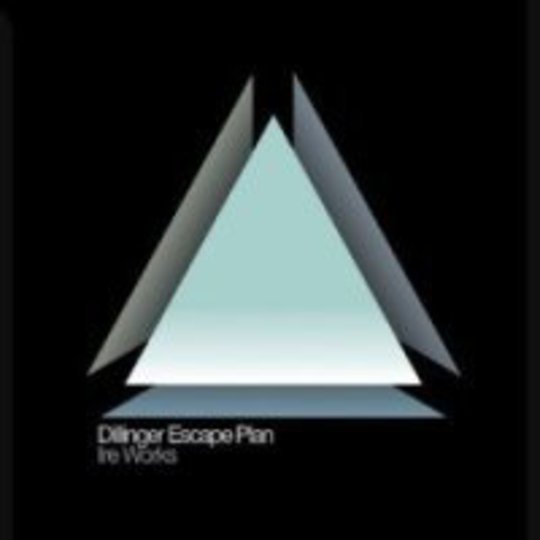 Miss Machine weeded out the doubters, the self-appointed purists head-shaking at their heroes’ chosen direction: melody and madness in the purest of unions, aggressive and accessible at once. New doors open whenever old ones slam shut, and while The Dillinger Escape Plan’s progress was easily traceable from album one to two, via an acclaimed Mike Patton collaboration and a few choice line-up changes, it never stuck to straight and narrows; this is a band unafraid of upsetting long-term admirers with new techniques and tangents, and Ire Works, their third long-player, is likely to further distance them from disaffected followers left puzzled by the mainstream-courting qualities of Miss Machine.

Of course, this is all relative: Miss Machine was resolutely not a pop record, something you could throw on in the car while driving mum to the supermarket on a Thursday night; she’d be clawing at the windows, desperate for escape. It was brittle and sharp, dangerous to sink into despite the glossed-up and ambitiously immediate compositions that sat amongst the expected explosions of rapid-fire drum beats and overwhelming bombast, tied and gagged by intricate technicalities that left the senses spinning. Old-school acolytes may not have taken to the album, but it opened Dillinger’s music up to a whole new, and highly impressionable, fan base. A certain Reading performance did the band’s reputation no harm, or rather their profile, but without a quality record such theatrics would have been sideshow attractions to a main course less than satisfying. The 10/10 score awarded by DiS was absolutely earned.

Ire Works might be a better album in comparison – their greatest release to date, the band will inevitably and rightly claim – but in the context of marked progression it lacks the impact Miss Machine had. The brutality remains in tracks like ‘Fix Your Face’, an alarmingly intense from the outset opener that serves as a timely reminder that this is a band schooled to perfection in destructive precision – it takes nearly a whole minute for the song’s pace to drop to a level where a breath can be taken and the body returns to an upright position. But there’s no real evolution in the band’s more manic moments – ‘82588’, save for a few brief flourishes of extra-extra bonkers guitar work, could have easily sat on the Miss Machine tracklisting.

Where Ire Works does highlight its makers’ fondness for exploring areas previously unexplored by them, and their fans, is in its most melodic passages. Track three, ‘Black Bubblegum’, could be the work of a particularly agitated Fall Out Boy from a distance, albeit if Pete and company were hardcore aficionados of the Faith No More catalogue. FNM are obviously an act Dillinger have a lot of time for – the Patton-featuring EP, Irony Is A Dead Scene, was no accidental meeting of likeminded souls – and here they echo the ‘90s rockers’ most wonderfully haphazard arrangements in a song that packs both sing-along verses and crazed, squealing riffing into its four-minute frame. A similar offering comes in the shape of ‘Milk Lizard’, which sounds for all the world like a Jesus Lizard number ‘til beefcake vocalist Greg Puciato out-loons David Yow with considerable ease. It’s a tumultuous pop-rocker, full of wandering guitar lines and even a weirdly lost-amongst-the-noise piano motif. If Dillinger ever wanted a pair of bona-fide _awesome _MTV (2?) singles, here they have them.

Another area where Ire Works showcases Dillinger’s fondness for furthering themselves is the incorporation of noticeable electronics; more than ever before, organic instrumentation born of plectrum on string or stick on skin is relegated to a secondary position in the mix behind slamming bass drops and cricket-click twitch-beats. See: ‘When Acting As A Wave’, which would be the greatest instrumental 65daysofstatic had ever written if it’d been born in a Sheffield rehearsal room, and the glitch-orama that is the schizoid ‘Sick On Sunday’. These tracks act as bridges between meatier offerings, but ultimately leave more of an impression than the ‘traditional’ arrangements serves up on Ire Works.

An oddly muted effort closes the album out – ‘Mouth of Ghosts’ is another FNM-echoing piece that’s almost entirely devoid of Dillinger’s trademark skilful tomfoolery; it’s probably the most ‘normal’-sounding song on this collection, which makes for a quite astounding progression when one considers Dillinger’s earliest material and its thrillingly alien feel. The lingering sensation: one of satisfaction, but not amazement. Ire Works is a brilliantly realised album, executed perfectly by musicians on top of their chosen game, but it doesn’t really raise the bar from where Miss Machine left it.

Which was pretty high anyway, so there can be no suggestion that Ire Works is poor in any conceivable way: the confrontational compositions remain absorbingly chaotic, and the infectious melodies have grown in strength. Plus, the strange and eerie electronic aspects of the album give it an unexpected edge on any tech-metal peers. It’s a frighteningly powerful album that will be adored by open-minded newcomers and Miss Machine converts alike. But will the deserters return?