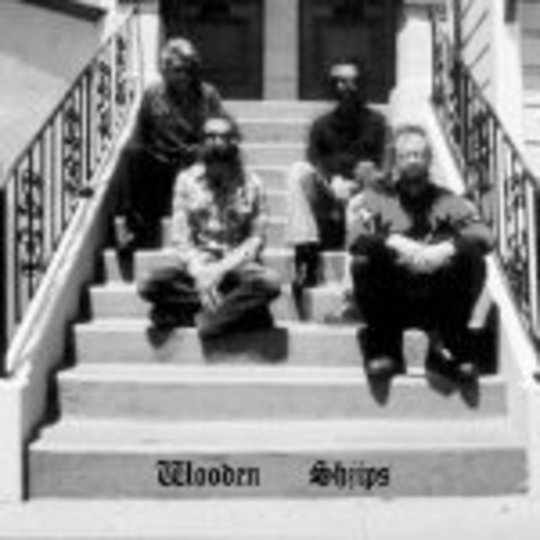 If there’s a new West Coast scene coagulating in the fall out from the split of the mighty Comets of Fire, then San Franciscan four-piece Wooden Shjips (yup, that’s the correct spelling) are there at its vanguard.

Alongside fellow San Fran’ natives Assemble Head in Sunburst Sound, Wooden Shjips are mining a sickly sweet but rich strand of pan-US/European psychedelic drone rock. Setting aside for one moment any kind of meaningful ‘progression’ in music since 1973, we’re talking about a scene that is righteously in thrall to the throb of the Farfisa and the dripping ooze of a heavily fuzzed-up and reverb-drenched guitar (but played very,_ very _slowly, over a long period of time). If the Brian Jonestown Massacre are recalling the dark pop of the West Coast’s bubblegum psych era, then here we are truly getting the bummed-out, day-after come down.

It seems clear that we’re dealing here with the three Rs again: repetition, repetition, repetition. It would be easy to dismiss this as a pure pastiche of some lost freaks’ two-chord work out if it didn’t press all the right sonic buttons. You want ten-minute-plus songs that radiate a blissed-out hydroponic nirvana? You got ‘em. Vocals float in and out then seemingly evaporate as though engulfed in a lysergic fug. ‘We Ask You to Ride’ explodes in a distorted guitar pile up over a simple three-note bass riff, maraca-shaking rhythm and organ drone. Being a child of the 1980s and having my mind expanded by the likes of Spacemen 3 this is what I imagine all bands sounded like in the late ‘60s/early ‘70s. Psychedelic rock played by hirsute men in dank rehearsal rooms whilst incense burns away in the corner. The reality is, of course, that most bands wanted to be the Eagles, and playing one chord over and over again lost out to sensitive singer-songwriter types singing love songs over delicately picked acoustic guitars. It took punk’s confused year zero aesthetic and the subsequent post punk/no-wave fall-out to turn the spotlight back to the beauty of rocks primal origins. Respect to Wooden Shjips for bypassing all the guff and un-ashamedly digging in at their own speed.

Fast forwarding to the ‘now’, Wooden Shjips could easily be bracketed in with the stoner meanderings of the Dead Meadows of this world, but whilst Dead Meadow appear lost in the woods, rather, this debut album positively chugs along from inside a malevolent driving motorik heartbeat. Wooden Shjips plan to take you ‘there’ – wherever ‘there’ may be is clearly another matter… but let’s not worry about that now.

_ So, think Loop circa their acid-fried masterpiece _Heavens End with a clear nod to the ‘communal living’ end of the Krautrock spectrum and the two-fingered musical salute of Suicide. This is a timeless shout out from the heart of the new West Coast weird underground. Please let them play live over here, and can we have an oil burning light show, too? Tune in, turn on and, indeed, veg out.