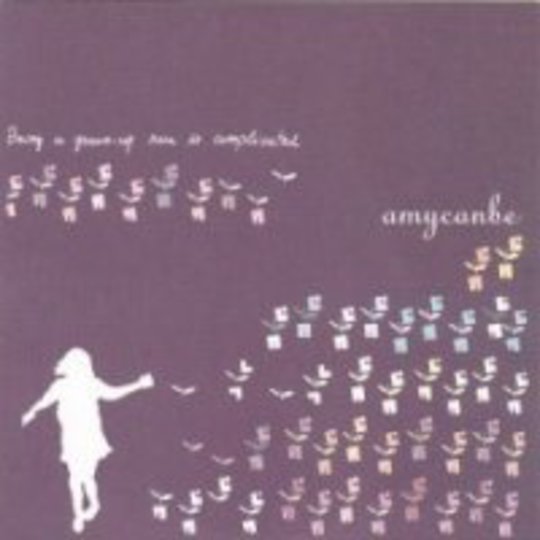 Francesca Amati is pretty sure she heard me knocking at her door – she says as much during ‘Killer Bees’, before going back to play with one of those electronic mental arithmetic toys for children, which then deposits its pearls of wisdom (“1 + 1 = what?”; “you’re right!” and the ever-galling “wrong, try again”) over the Italian quartet’s soft, acoustic lounge folk with a hint of strings.

To be honest, I’ve never been very assertive when it comes to knocking on the doors of people I don’t know, but if I was to choose a door to knock on, it probably wouldn’t be the frontwoman of a band signed to a label with as twee a name as Dancing Turtle Records, nor one whose album was called something as cutesy as Being A Grown-Up Sure Is Complicated, though her faintly-husky and coyly-quiet voice, curling at the edges with her gentle European accent, most definitely has a certain sweet appeal.

So why then, despite the apparent beauty of most of Being A Grown-Up Sure Is Complicated, do I find myself rarely at its mercy? From start to end, it’s soothing and inviting, but for some reason its contents never really stick in the mind despite each song being well-crafted in their own lounge-folk way. To make it more frustrating, every so often Amati hints that she’s about to let the sweet act drop and make the step up to something a little bolder, but she never quite hits the fully-lunged Bjork-like heights that she suggests she’s capable of.

She’s still able to give the album its highlights though, momentarily giving a jumpy adrenaline rush to the otherwise bass-led, Jazz Club meander of ‘Get Closer’ and providing an air of effortless cool for ‘Burning’, the album’s highlight and one distorted moment. But these moments are all too fleeting, the songs instead returning to their summery, acoustic-based ways soon after, often lacking a certain presence despite the beauty.

Amycanbe's debut album consequently becomes background music rather than something to hold the attention, and ultimately it all comes down to this: you can have all the prettiest musical touches, the lushest of melodies sung by the cutest of voices and the result will initially be a pleasant listening experience, but without a certain level of impact, this kind of thing will always be in danger of being left behind as easily as the coffee houses you might well hear it in.