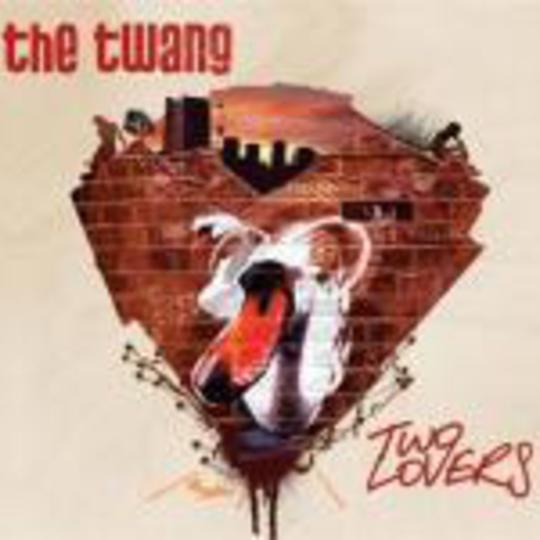 That plays-himself ‘actor’ Danny Dyer features in the video to The Twang’s latest standalone offering from their decently-selling I Love It When I Feel Like This album should tell you next to everything you need to learn about it – this is lad-rock for the very lowest-rung lads on the block, the block being based on some shit-hole estate in a nameless town under grey clouds and with shattered pint glasses underfoot. It’s, like, real_; it’s cut from the same cloth as the everyday men who toil for their end-of-day rewards, and who encourage kids to carry knives ‘case their mates from across the park get a little aggro. Or. Something.

Basically, this is wholly familiar territory we’re treading. Lyrically ‘Two Lovers’ is a harmless enough tale of a wheelin’ dealin’ stealin’ man about town – salt of the earth, et fucking cetera. He gets into scrapes but ultimately has a laugh and, most importantly of all, gets the girl come the close of play. Compositionally it’s sweetly so-so enough too, evoking memories of the Charlatans at their most mediocre but not stirring the listener towards reactions fuelled by disbelief and hate. It is, simply, ordinary. It’s not dangerous in any way, and needn’t provoke any what-the-fuck bemusement from listeners with broader tastes than these own-five-records musicians.

Which leads to an equally simple conclusion: what, exactly, is the point of The Twang? They set out, around the time of the NME_ butt-kissing, to rile and irritate, to get under the skin of those that considered Kasabian knuckle-draggers of the highest order by actually out-dumbing them, albeit with a swaggering confidence that sat at polar opposites to their actual output. But to date the walk hasn’t once lived up to the talk, and while ‘Two Lovers’ could be summarised with a shrug of the shoulders and a beneath the breath meh had it been penned by a less-attention-seeking outfit, as this is The Twang we have to dock it a few additonal points for just being too dull. Too dull in a manner that its makers should never have allowed it to be, given all that pre-product rhetoric.

It’s much like one of Dyer’s own films, The Business: you’ll tolerate it while it’s on as it’s pretty far from distracting or engaging in a memorable way, but you’d never actually go out of your way to experience it purposefully.