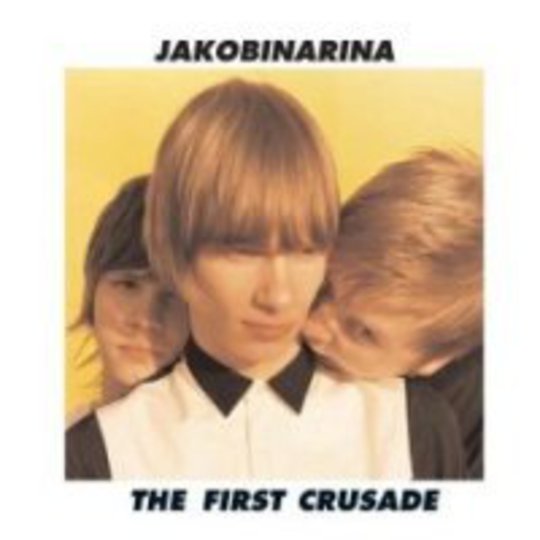 Few of the current indie brigade sound like they’re having much fun. Look at Razorlight, for example: in the midst of taking themselves ultra-seriously Borrell and co. seem to have forgotten about the inherent fun of being in a band and become mighty miserable. In complete contrast, Icelandic loons Jakobinarina are having a ball on their debut record The First Crusade.

Led by firebrand vocalist Gunnar Bergmann and fuelled by a tangible frustration and desire to get out of the boring mundanity of their hometown (the tongue-twistingly named Hafnarfjörður), Jakobinarina’s debut album spills over with potential hit after potential hit, all grand ideas wrapped up in frenzied punk spirit. Taking aim at pop culture with a healthy dose of cynicism and biting lyrical barbs, the sextet are a refreshing antidote to the kitsch obsessed malaise of the new rave, no hoper set. From the opening prattle of the rabble-rousing ‘It’s Monday’, Bergmann is ranting like a madman about kick-starting a dance revolution and never really lets up for the next twelve tracks. While ‘It’s Monday’ isn’t quite the nifty toe-tapper it might fancy itself as, the following surge of ‘His Lyrics Are Disastrous’ certainly is, coming off like Gogol Bordello’s Eugene Hutz fronting The Libertines (this is a more appealing prospect than it may seem in theory, promise). The band ratchet the ire and tempo with each progressive track but always with one eye on the melody - ‘(I’ve Got A Date With) My Television’ sounds like a futuristic bar-band and recent single ‘This Is An Advertisement’ is a deliciously drippy, self-deprecating pop trinket.

While it’s far from infallible, The First Crusade is a raw, blustery cornucopia of firecracker indie-rock tracks that spit and seethe as much as they exhilarate. If they shaved two or three off (the sketchy intermission of ‘End Of Transmission No.6’ for one adds nothing of worth to proceedings), this would be a bubbling little gem of a debut. But we’ll forgive their occasional foibles and the suspiciously familiar melody lines sprinkled throughout because Jakobinarina make indie music sound fun again.