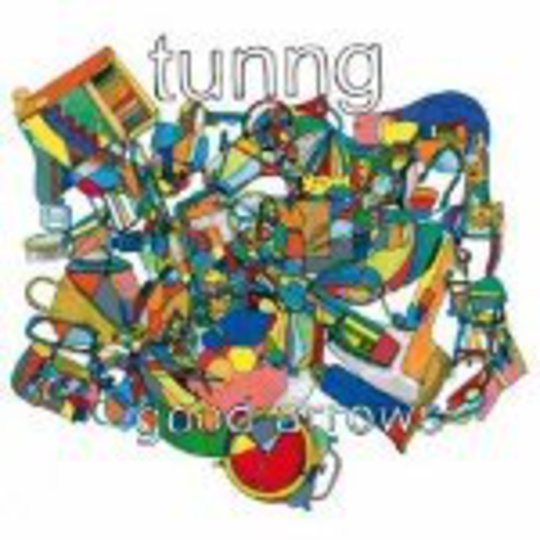 ‘Hands’ is just one track on Tunng’s third album, and second for the Full Time Hobby label, which skirts around subject matter most horrid in a fashion that feels paradoxically perfect. Gentle and steady, Good Arrows reveals itself via a series of vignettes, a procession of stripped layers, each another insight into the collective mindset of an outfit tied to folk traditions archaic but progressive enough compositionally to cut it with the movers and shakers of the most contemporary maverick circles. It’s an album sufficiently laced with despair to render the not-committed listener uncomfortable; delve deeper, though, to where the darkness makes way for an eerie underworld glow, and the record’s beauty emerges.

With little in the way of bleeps and beats present, the previous albatross about the band’s neck that was the ‘folktronica’ tag – trademarked by Four Tet circa Rounds by our reckoning – has been lifted clean and clear from view; instead, a measured sparseness characterises Good Arrows, the gaps in sound giving the strums and clicks about the nothingness room to breath and evolve, to creep stealthily into the synapses with silken poise. Never rushed, the album runs to a curt and tidy 43 minutes and 11 tracks; it’s a snapshot of a group forever moving onwards, taking cues from the past to progress to a plateau of creativity rare in the folk field. ‘King’ and ‘Bullets’ (all song titles are single-worded) echo the melancholic overtones of the opening quote, but while the lyrics of Good Arrows could be interpreted as the musing of a manic depressive, there’s a glee in the make-up of these songs that permeates any lingering suggestion of doom and gloom. ‘Bullets’ may speak of the spilling of blood and guts, but set to a jaunty back-beat it’s quite the toe-tapper.

As _‘Cans’ trickles to an end, and in doing so closes the album, laughter can be heard beneath the chiming of a church bell; chatter and merriment, the socialising of many for a sole cause. It’s an almost celebratory climax, and one that sees the listener home with a smile intact. Go round again and the same demons emerge; look closer, though, and you’ll notice that they, too, are grinning wickedly.

Dead and gone? Sure, eventually. But from the point of view of sparkling creativity, Tunng are far from a faded force, and Good Arrows can only further their already blossoming reputation as a domestic act to cherish.