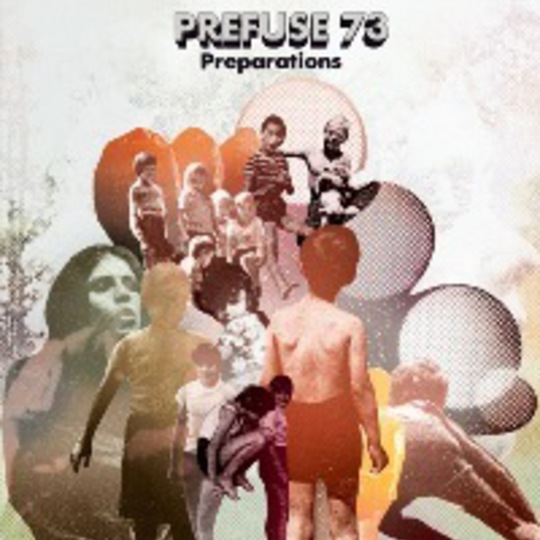 Guillermo Scott Herron has four different personalities (last time I checked, anyway; there may be more) and I wonder how, with each one, he can sound so unique.* Prefuse 73*, Savath Y Savalas, Piano Overlord and Delarosa and Asora. How does he keep these musical personas separate? Is he actually able to do so, or do they blur for him? On his new Prefuse 73 release, certain similarities in tone are noticeable to his recent Golden Pollen offering, under the Savath y Savalas guise. It seems like these organics are blurring into the more computerized stylings of the_ Preparations _LP, and I really like it.

Still, it’s a long way from the natural and assuredly cultural sounds Herron has constructed elsewhere, under other guises. There’s a strange electronic sense of tension on a track like ‘Aborted Hugs’; it’s pushed along by pixels, the odd wail of a saxophone, layers upon layers of dense sonic carpet. It’s a little prickly, but like most of the album, it’s coated with a fuzziness that’s appealingly warm.

As is usual with Prefuse 73 albums past, Preparations is fairly relentless. A certain tension and tone carry through the album, and while there isn’t much deviation from this aesthetic, it’s an aesthetic well and truly his and his alone. He delves far,_ far_ into the murk, with headphones firmly clamped to his ears. There’s not much room to breath, blank spaces filled with samples or beats, or any type of sound. There are a variety of instruments weaving in and out, more so than ever before so far as Prefuse 73 LPs are concerned.

Listening to Preparations, thankfully, is not an entirely mechanical affair; in fact, it’s very clear just how from the heart it is. That’s how it sounds, at least. While striking these emotions, it also raises questions: is this hip-hop? What is instrumental hip-hop? Just hip-hop without words? Vocals are scant on_ Preparations, and if they do appear, they’re of the sampled variety. Could it be ‘glitch-hop’? Is that how it works? Because his sounds contain a whole lot more than what’s typically classified as being of a glitch nature. I can't help but feel he's breaking boundaries, especially with earlier stuff like _One Word Extinguisher. Questions aside, it_ sounds _badass; dope, even, like any good hip-hop record should.

Each of his individual works come across as a collage, filled with different instruments and sounds and samples. Whatever genre this is, it's one of the best things around, and one of the more palpably forward-thinking sounds around. _Preparations _reasserts this, even if it doesn’t move in any hugely bold new direction, for him, at least. It’s most interesting on the textural side of things. There’s no one else that weaves these digital blankets, especially ones that feel so real.

So, our Guillermo Scott Herron is certainly prolific, and he takes a lot of risks with each project. It pays off: when he hits, it's really worthwhile, and even on the misses there is plenty to find interest in. Such cut-up music begs the question of how exactly it's made; where does he get all these sounds, how does he go about pasting them all together? To various degrees, Preparations raises the old notion of electronic music exhibiting a very real and human heart – there’s feeling to these glitches and blips and bloops. And, along with it, a strange and beguiling sense of humanity.