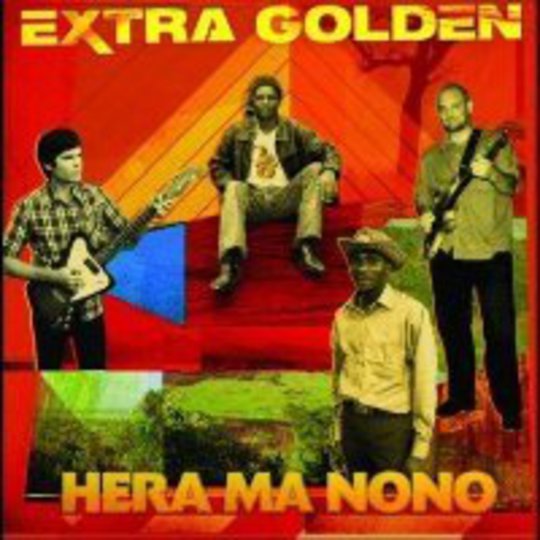 Ever since Paul Simon decided to bombardier his flailing ego round the world’s barrios, making a dart for any marimba or panpipe that was going spare, noses have tended to quickly turn from the sort of foundations that Extra Golden are built upon.

Formed after Ian Eagleson, lynchpin of DC alt outfit Golden, met Orchestra Extra Solar Africa’s Otieno Jagwasi in 2000 after venturing out to Kenya to complete a doctorate in ethnomusicology, Extra Golden soon built up an appetite for bouts of benga in place of rock bombast. But when it takes Beirut’s Zach Condon, A Hawk And A Hacksaw’s Jeremy Barnes and moustached arsehole Eugene Hutz to bring a significant reception to traditional gypsy music outside the Balkans purely because some western bumpkins decided to straddle the genre, scepticism is rife with such musical gallivanting. And so, even after their debut Ok-Oyot System in 2006, Extra Golden still seems to require some sense of caution for any post-colonial tendencies.

Following lead vocalist Jagwasi’s untimely death from liver failure in 2005, Eagleson, having obtained a proper distribution of Ok-Oyot…, returned to Nairobi with fellow Golden associate Alex Minoff to produce Hera Ma Nono, later recording the album in Pennsylvania’s Pocono Mountains. With it difficult to do justice to the engrossing tales that accompany the act, Extra Golden fortunately provide a record that steps deeper into the issues that its predecessor occasionally only clumsily fumbled around.

In spite of the language barriers - the bulk of the record is sung in Luo - within eight bars of ‘Jakolando’ everything that makes Extra Golden so absorbing is on show. Many of the topics allow an immediate sense of connection despite the alien tongue. Sung by Onyando Jagwasi, brother of the late singer, his voice resonates with a hollow melancholy that sits bewilderingly over the buoyant track that backs him. Elsewhere, Opiyo Bilongo takes over lead vocal duties and provides the same timbre, sitting awkwardly between deliriously disturbed and in absolute ecstasy, cut up and confessional on ‘I Miss You’. ‘Obama’ pays its respects to the aspiring presidential candidate Barack, having helped arrange visas for the act to perform in Chicago, and, as with most of the tracks on the record, is a lengthy composition with Minoff’s spidery riffs and Onyango Wuod Omari’s comfortably complicated percussion shifting through stages without ever dragging it all out.

Hera Ma Nono still possesses an often awkward transition between the jarring Kenyan and North American influences, but this also essentially provides Extra Golden with their character. Though certain tedious aspects seep in from the sides and threaten to envelop it all, with ‘Night Runners’ and ‘Street Parade’ struggling to battle off being coated by a layer of laboured art-school world music, the seams are sewn far tighter than before. As the record closes and the title-track fades out, any loitering suspicion that this would be mediocre pedestrian drivel is dispelled, leaving the sense of a beguiling passing parade.