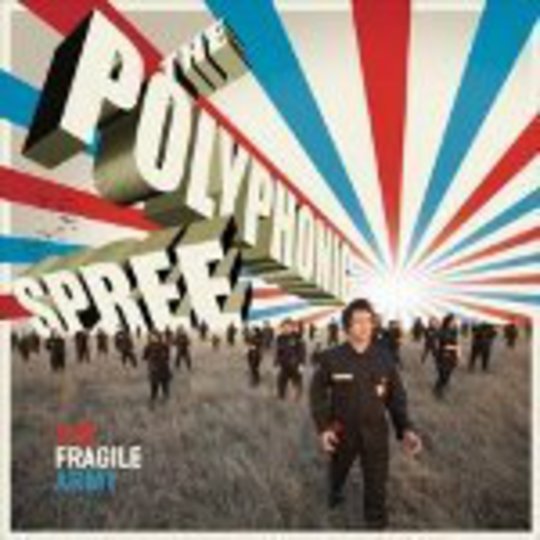 On their emergence in 2002 The Polyphonic Spree split people into three camps: those who thought the faintly-religious imagery of almost 30 Texans in robes singing happy songs was too much to bear, those who accepted the music as joyously melodic and didn’t give a crap about the baggage, and those who bought Welcome by Taproot. Obviously that’s overly simplistic, but for a band seemingly so eager to please it was alarming to see how many people greeted them with antipathy.

Good thing, then, that The Fragile Army marks a coherent step forwards for the Spree, because even though their musical template remains disarmingly familiar, the execution has been refined to iron out the pop imperfections. The title track is a yearning ode to insecurity - ”We all want to know if we bury the ones we love the most” goes the refrain, suggesting that, far from being the happy-clappy nutbags they were characterised as five years ago, they’re actually attempting to write proper songs without the novelty of having two thousand members. It’s like the sun’s gone down in Tellytubby Land.

’Younger Yesterday’ suggests a hankering for days of yore, but is expressed in a far less clichéd manner than could be expected. Frontman Tim DeLaughter has managed to tone down the annoying vocal inflections that made The Beginning Stages Of… so forgettable and instead has worked on finding some lush harmonies that practically soar when combined with the choir. And while it could be dismissed as a cheap trick, there’s simply no better way to make a buoyant pop song take to the skies than to subtitle it with a dozen different voices, as on ’Guaranteed Nightlife’. While it’s undeniable that you might have to be in a particular mood to not find the relentless perkiness of the Spree tooth-grindingly awful, this is the aural equivalent of getting home juuuuust in time for Match of The Day – if you like football, you’re onto a winner but if not, then you’re fucked.

And there’s a pleasing strand of experimentation running through The Fragile Army that, even though it could have been developed slightly further, suggests that the Spree are more than a one-trick, um, choir. ’Mental Cabaret’ has a stomping disco shimmer and ’Light To Follow’ starts off disarmingly naked before building itself up into a familiar crescendo. It’s by no means a reinvention of the wheel, but as a simple reminder that sometimes the world isn’t purely gash, it’s hard to beat. Hipsters need not apply, though.