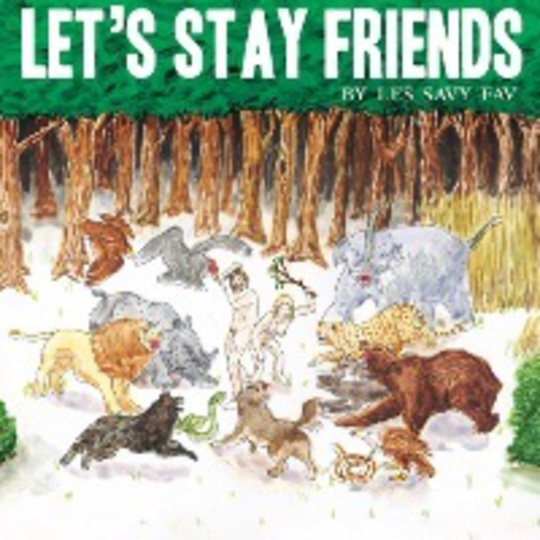 Fugazi, Girls Against Boys, Eels, Pixies, Pavement. A map of influences laid out in a recent review of Les Savy Fav, and a set of directions that I basically never felt I needed. The odd infatuation with ‘Novacaine for the Soul’_ or ‘Holiday Song’ aside, Fugazi (and, perhaps, Pixies) are the only band from that quoted quintet that I’ve given more than a cursory “play the hits!” investigation. And even then that’s only because MacKaye’s CDs were cheap and I could afford two a week on my wages as a 15-year-old Burger King mop-pusher. Shout “Pavement” or “Girls Against Boys” in my ear at a crowded show and I’ll either dismiss them out of hand or pretend I haven’t heard you.

Which is fair enough really, isn’t it? That sappy, ‘90s college rock is all the same anyway; so polite the presence of it irritates, like a stuttering goon hopelessly convinced of his own pointlessness. In those fast food days the only US rock I’d take was Anglo-aping – in thrall to the dumb, snaggle-toothed bluster of Rancid, Bouncing Souls, F-Minus, Distillers. A few time-tangled pilgrimages into the back catalogue of standards like Sonic Youth and At the Drive-In and a crass knowledge of ‘the rest’ aside, it’s always been the totems of English pop culture for me. Nirvana? Joy Division. New York Dolls? The Clash. Et cetera. As a partisan 15-, 16-, 17-year-old, at least. After that it was drum’n’bass and The Libertines. Only when they split with ‘Arcady’ and ‘Albion’ did I lay my St. George's X down and start to realise what I’d been missing.

Why is any of this pre-amble relevant to the new Les Savy Fav record? Because it’s people like me that need to hear records like Let’s Stay Friends, and early; before we’re put off by a honed, sixth-sense ignorance of any band name that has that collegiate ring to it. I shouldn’t be put off – this quite obviously is a cut above ‘ver rest’ and more people should know about it. That’s what first listen says, at least – released a week after Foo Fighters’ latest offering, this is three times the record Echoes Silence Patience & Grace is.

One: it still packs that big-rock punch – the songs that make up Let’s Stay Friends are immediate and massive, as in the stadium reverb rattling around at the end of album opener ‘Pots and Pans’. Two: it still has the damp sweat of energy and imagination that finally dried up on Dave Grohl at some indeterminable point around the turn of the millennium. Sample lyric: “Being the king was pretty cool / I'd have to say that ruling ruled” (‘Raging Against The Plague Age’). Three: at no point does frontman Tim Harrington’s sincerity sound false or forced. When he gets bored of a song he just stops, as he does, demonstrably, in the dying embers of _‘Kiss Kiss Is Getting Old’. Jetplane Landing had a point when they asked, ‘Why Do They Never Play Les Savy Fav On The Radio?’; even if they didn’t when they called them the only punk band left in America.

It’s been said that Let’s Stay Friends is more pop than anything Les Savy Fav have put out before, but it’s still tight-fist tough – witness the feral marching on ‘Slugs in the Shrubs’ or the ice cube/neck thrills running in the throat of Toko Yasuda’s vocal on ‘Kiss Kiss Is Getting Old’. The Enon girl’s voice is at odds with Tim Harrington’s. His gives that sore, insta-warm radiator buzz to earlobes frozen in the shivering treble of stalactite guitars. And it’s the subtle changes in temperature that returns life to the band, dynamic even in the pressed divot of pop-rock(punk) their music twists and swivels in. It’s a leaden genre – Les Savy’s victory is that they take it and make it attractive, ‘young’ and almost vital. ‘Almost’ ‘cause it doesn’t quite take enough risks to justify such a big word; every song here being built like a brick out-house: there’s not quite enough danger or dare.

At the moment I don’t know Les Savy Fav well enough to know whether that lack, and their absence from many, many minds, is by design or by fault. All I know is that they could, and possibly should, be fucking huge.