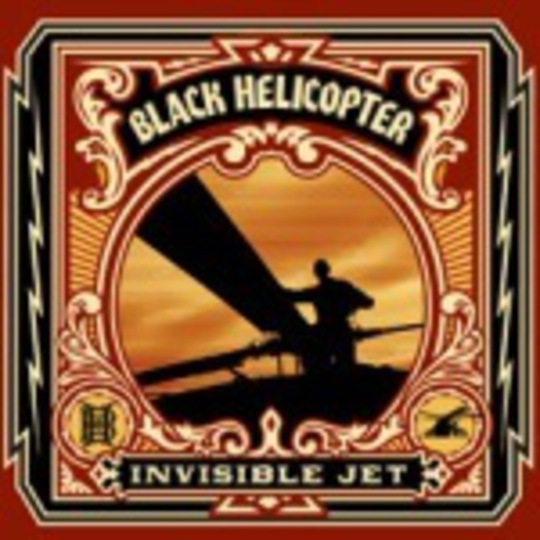 Wouldn't it be good if there was some magic button that you could press on the front of a record sleeve, bringing the title to life? Think about it: if the Beatles album came with a real Revolver, then maybe someone could've shot Mark Chapman first. Or if Girls Aloud let you press their button on their first record, you'd have the 11:53 from South Ealing to Russell Square screeching back at you. (I’m just going to pretend I know what you’re on about here – Ed)

The moral of this story? Well this record's called Invisible Jet, see? Wishful thinking? Thought so...

Anyway, onto the task in hand: Black Helicopter, by all accounts, could be classed as an underground super-group by way of the fact they are entirely comprised from the remnants of two of the most critically acclaimed (if not entirely commercially successful) bands of the early ‘90s, Green Magnet School and Kudgel.

Where the former paved the way for some of Sub Pop's more adventurous bands to boldly go where no one had ventured before - Mudhoney's foray into neo-psychedelic territory with Spacemen 3 springs to mind - the latter was allegedly responsible for inventing (and then destroying) a genre oddly known as ‘chimp rock’ – it could possibly be seen as the middle ground between the punk credentials of grunge and one-louder riff patronage of nu-metal.

The fact that both bands all but imploded well over a decade ago tells its own story, and one can only imagine the arguments in the studio making this record. The truncated riffs of Tim Shea and Jeff Iwanicki, mixed with the bludgeoned rhythms of Zack Lazar and Matt Nicholas, make for an interesting train crash of sorts, as Dinosaur Jr middle-ground slacker playfulness finds itself savaged in the Soundgarden.

Championed by Thurston Moore since their conception, Black Helicopter are a strange beast: they deserve to be heard in every possible context, but should be approached with caution as their succinct delivery at orchestrated wryness will move mountains and break hearts in equal measures.