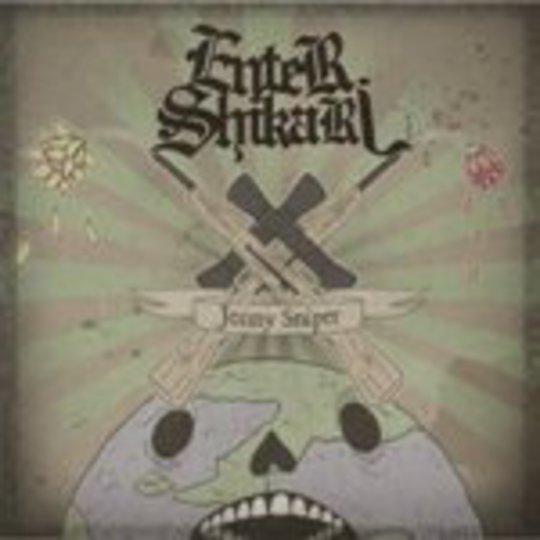 I'm confused. Am I supposed to take these guys seriously? On one hand they have won_ NME's John Peel Award for Superamazing Uniqueness _or something (which says more about NME than the loveable iconic, but rather unfortunately dead, DJ), yet on the other it comes into my hands from the DrownedinSound.com offices with a “LOL” from editorial and their fanbase, on the whole, is younger than Gary Glitter’s taste in Cambodian boys.

Ultimately, of course, it shouldn't matter how seriously you are supposed to take Enter Shikari. What does matter here is the four minutes and 40 seconds that make up the St Albans four-piece's latest single, 'Jonny Sniper'. And on those merits, well, it's still as difficult to come to any critical conclusion.

You see, this is music at its most enthusiastic, and it is overflowing with ideas. Its problem, though, is that sometimes it seems like Enter Shikari are simply throwing a load of shit at a wall and seeing what sticks, and then compounding the confused impression further by not bothering to clean up what doesn't from the floor.

So for the punching guitar riff and mid-range screams that pop in at the 40-second mark, which brings to mind one of Envy’s more standard chorus build-ups, there are irritating childish samples and synth bursts that never really add to the song. It’s all a bit of a muddle.

As much of an anti-climax as it seems – and as distanced from the extreme split opinions the band have attracted to date as it is – the sole opinion formed in the wake of ‘Jonny Sniper’ is that Enter Shikari are a band of average quality who were around at just the right time to become the darlings of younger followers of two popular contemporary scenes, hardcore and new-rave. They’ve worked hard enough to become as big as they are, for sure, but on the evidence of this they’re enjoying a far higher profile than they probably should be. John Peel would, no doubt, be rather nonplussed.