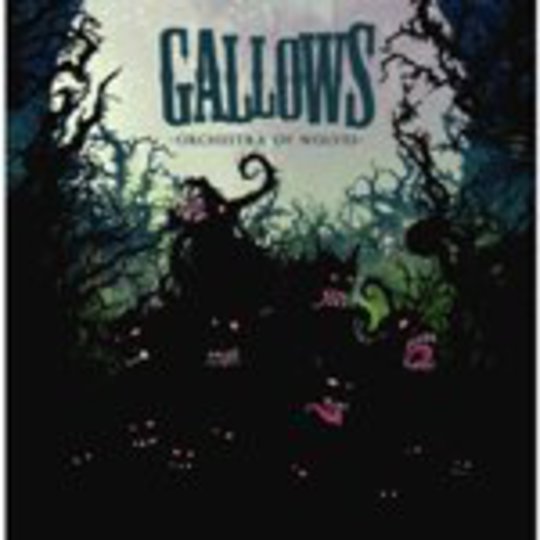 Another label, some new artwork, but beyond the aesthetic front just what has changed on this ‘new’, ‘special edition’ version of Orchestra Of Wolves, Gallows’ debut album of last year which reached number four on the DiS end-of-year countdown as voted for by you? (Click here for the top ten.) On the original disc, a whole lot of nothing, but… there’s a bonus disc. Ooooh.

The reason’s a simple one: milk the existing fanbase. Makes sense given the lack of bells and whistles on the In At The Deep End-released Orchestra…, which is what you get here, again, with six BBC session tracks stuck on an additional CD, two new songs and a cover of Black Flag’s ‘Nervous Breakdown’. Of the session tracks, a pair from 2006 – ‘Just Because You Sleep Next To Me Doesn’t Mean You Are Safe’ and ‘In The Belly Of A Shark’ – are by far the most aggressive. The four from earlier this year are rather more by-the-book, the band’s collective heart clearly not entirely moved by the sterile studio environment.

The new songs are clearly this release’s main draw – ‘Sick Of Feeling Sick’ is a typically savage number, stuffed to bursting with choppy riffs and foul language; ‘Black Heart Queen’ is angrier still, but neither song tells those already overly exposed to Gallows anything new. They’re a punk rock band with a few killer hooks and looks to match their nasty on-record output, all snarled lips and burning eyes. Dangerous, you know? Except in a vaguely pantomime fashion, not that we’d say as much to their faces – it’s their performances, though, that keep the faithful coming back. The album’s just an advertisement for ginger-topped vocalist Frank Carter leaping into a crowd, spinning a limb, and smiling come the end of everything like that proverbial cat, cream all around its gob.

Cream? Ah, milk: will anyone already in possession of Orchestra… buy again? Nope, no chance – the extras aren’t wholly necessary, and can probably just be downloaded individually anyway (take the new tracks and the early session songs – the cover’s just that and nothing more). Newcomers can be assured that they’re buying a genuine nine-outta-ten record – read this for the DiS review – but the superfluous additives aren’t worth anything above a six. Seven and a half, then?

A Hawk And A Hacksaw, Fanfare Ciocarlia at The Barbican, City of London, Wed 30 May