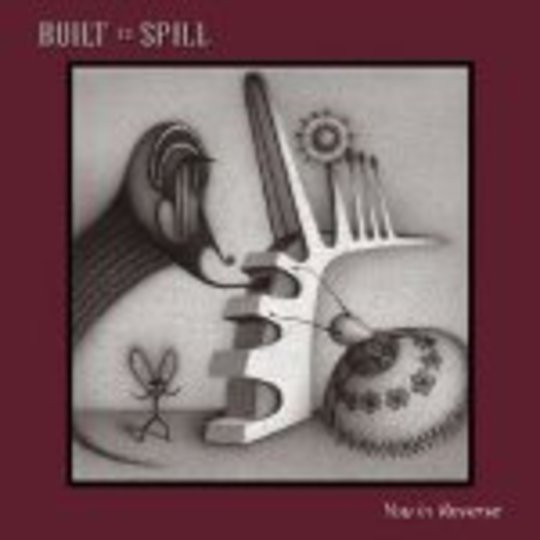 It’s funny how few people in the grand scheme of this mixed-up musical landscape haven’t heard (rather than 'heard of') Built To Spill. Doug Martsch founded the Idaho indie-rockers way back in 1992, and their debut album Ultimate Alternative Wavers followed a year later. Always intended as a revolving-door deal, only Martsch has been a constant throughout the comings and goings of members too numerous to list here. You In Reverse is the collective’s sixth album, recorded as a five-piece, and arrives some five years after their last LP, Ancient Melodies Of The Future.

To the uninitiated, Built To Spill might have always seemed a little too indie, a little too left of the mainstream to warrant their investigation – it’s not like the band have ever really exploded overground in the manner of Death Cab For Cutie or Modest Mouse (both comparable outfits – the former vocally and melodiously, and the latter with regard to the occasional freak-outs into distorted noise and sporadically jagged riff work). That, though, is poppycock: few American indie bands of the last decade have penned as many bona-fide classics of alt-rock as Built To Spill – they’re hugely admired by their peers, and for a very simple reason. Their songs are, often, magical. You In Reverse is simply a continuation of critical successes past.

Although initially influenced by the pop-cacophony of Dinosaur Jr back in the day, Built To Spill have outgrown any sound-alike origins – now, they’re seen as influential sorts in their own right. Songs like ‘Traces’ and ‘Saturday’ seem so simple when heard after the latest – oh, I don’t know – Parts & Labor offering, but they come from classical ‘college rock’ circles. If you hear a little Foo Fighters in the latter song, it’s almost certainly because Dave Grohl’s lifted shamelessly from Built To Spill’s pop-hooked rock in the past, that naughty, toothy, millionaire drummer. That paragraph-above nod to DCFC and Modest Mouse is entirely relevant for another reason, too, as both Isaac Brock and Ben Gibbard have cited Built To Spill as a great influence on their arena-filling acts. Built To Spill are, therefore, quite the indie band’s indie band.

But they’re also, despite their apparent structural simplicity, a troublesome band to criticise. Not a note on You In Reverse is needless, as Martsch is as superb a master of restraint as he is of melody. Everything’s so perfect that, even after the eighth or ninth listen, the reviewer can’t help but think they’ve missed something, somewhere. Some rogue blip, or a rough-edged riff misplaced within a swirling indie-pop vortex of loveliness. But no: repeat visitations merely confirm that You In Reverse is Very Good Indeed. But the hardcore fanbase already know that: it’s been available on import since last year.

Newcomers to the band enthralled by the aforementioned parallels are advised to pick this album up post haste – it’s not rocket science, that’s for sure, but there are tunes here that most million-selling bands would give away all of their mansions for. Let’s hope, in their fifteenth year, that Built To Spill finally receive a substantial slice of the proverbial pie that they’ve continually baked for other acts to swallow over all these years. Perhaps now they really can have their cake and eat it.