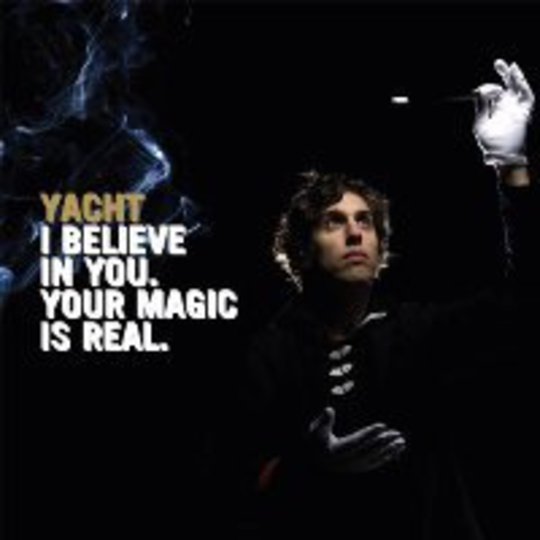 In a cosy cocoon all of his own, away from any limitations his pairing in The Blow may have imposed, Jona Bechtolt sits comfortably numbskulled as YACHT, wrapped in his own perverse world. After joining forces with Portland balladeer Khaela Maricich for a short spell, I Believe In You. Your Magic Is Real sees the pop minstrel return to his usual solo sugar-coated jarring pop nonsense.

We've been heads-down and drowned in a barrel of warped electronic pop ventures this year, slowly eroding amid Dan Deacon and Videohippos’ seizure-inducing shenanigans and jaws dislodged by the majestic leap towards such a territory Strawberry Jam marked. Though this is terrain YACHT has long trodden, I Believe In You… seems to find the beatnik more befuddled and desperate than ever to recapture waning attentions.

As ever, it’s a mixed bag. Every project Bechtolt has ever embraced has had pop undercurrents, distorted as accessible hooks are undone by Bechtolt’s agitated production. But for every track that hacks away at Bechtolt’s trademark jabber, with the Eats Tapes collaboration on the mutating techno of ‘It’s All The Same’ paying particular dividends, there is the deranged ‘We’re Always Waiting’ with its incessant, jackanory delivery of “We. Want. All. That. Stuff / All that stuff that cost too much” resembling Mika’s knuckle-gnawing bleat.

As an unquestionably proven beatsmith, harking back to YACHT’s 2004 release of _ Super Warren MMIV, it is the instrumental-focused moments that are the finest here: _‘So Post ‘Em All’ makes out like Chad Hugo tampering with a Person Pitch offcut and stands out as far more remarkable than the incessant pop-posing of the ‘Miss You’-pilfering ‘See A Penny (Pick It Up)’. Maricich’s impact on YACHT is plainly marked, with the backing vocals that Clare Lewis provides on many of the tracks charting a familiar realm, though whether this is a positive influence on the record is difficult one to call.

As the first release on Tomlab lynchpin Jan Lankisch’s independent venture with ERR, I Believe You... is fairly free of the pretense such idle-minded eclecticism tends to showcase but seems somewhat clumsily cobbled together, culminating in the calamitous Ivor Cutler-filching curtain-closer ‘Women Of The World’ moments after the manic ‘Your Magic Is Real’. With a decent dose of the bedroom-bred laptop dynamism that has earned YACHT such an appeal, I Believe In You. Your Magic Is Real continues previous form as a beguilingly claustrophobic mess.