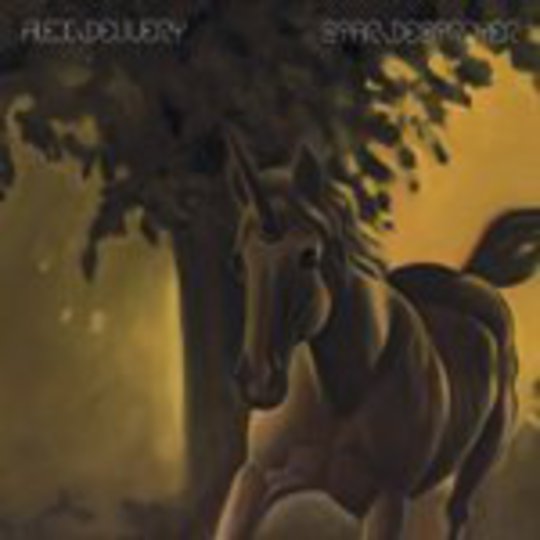 Brooklyn-based art-rock collective Alex Delivery don’t make it easy for the newcomer to love their debut album. Opener ‘Komad’ is twenty songs squeezed into ten minutes, and nineteen of them only spiral out from the five-piece’s myriad instruments during the song’s second half. Its first five minutes are consumed by the sound of metal on metal, a screaming grind of robot death captured in horrific slow motion while a perverted priest mumbles something about empty whiskey bottles and kids on street corners. Or. Something.

‘Rainbows’ is, as its title so accurately implies, a little prettier by comparison to its immediate predecessor: three-minutes of melancholy indie-folk with a throbbing bass-heavy heart at its core, the song dissolves into an orchestra of android cricket clicks come its conclusion. Everything being relative, though, the Alex Delivery outsider will struggle to find sense amongst even the simplest song structures – this is a band purposefully colouring over the lines in permanent marker pen, ironing on offensive transfers to kiddie t-shirts at their local Gap store and picking all the garlic out of stuffed olives at the deli counter. And other such annoying-for-some-but-fun-for-one things.

Occasionally Star Destroyer lets its feel-your-way-through clouds part a little and clarity washes over scattered rubble of confusion and alienation; tracks like ‘Milan’ and ‘Sheath Wet’ share sensibilities with Yo La Tengo’s more out-there leanings, and fans of Battles, volcano! and their tech-rock ilk will admire much of Alex Delivery’s head-scratching complexities. Star Destroyer is not comfortable to digest; it takes many a listen to understand, and further time to grow to appreciate, admire and, perhaps, love. As layers split from others around them, songs become less cluttered than they initially seemed – liquid beats become friends rather than foes, and obtuse vocals develop furry edges to their at-first-excruciating execution. Chimes signal changes, and Alex Delivery only trade in those of a sea variety.

Not a make-a-name record by any means, Star Destroyer nevertheless sets a precedent for future Alex Delivery records to be measured by. It’s by turns inaccessible and wonderfully catchy, inspired and irritating. It’s a smorgasbord of delightful ideas not fully realised… yet.