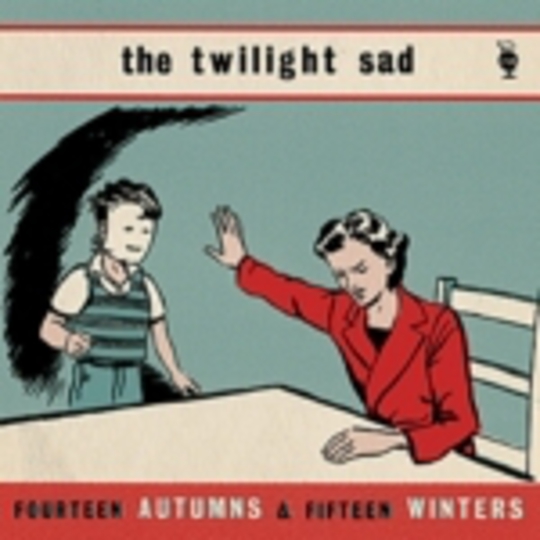 As band names go, The Twilight Sad doesn’t reach out and grab you, does it? I mean, it doesn’t really even make much sense. There are no puns, no Sonic the Hedgehog cheat codes, and they’re not foreign so there are nó áccénts anywhere to be seen. The name, it just... is.

And that’s exactly why it is the perfect name for a band whose debut album works best as dusk begins, who rely entirely on musical excellence to get your attention without gimmicks, whose song titles read like they were translated from English into a foreign language and then back again, and a band whose debut album will put a smile on your face whilst they themselves are little other than completely serious.

Said album is Fourteen Autumns & Fifteen Winters, a nine-part adventure narrated with a soft Scottish accent as thick as The Proclaimers’ over a sound which at any one point can be as calm as the high piano note looped over opener ‘Cold Days From The Birdhouse’, as intense as the point in ‘That Summer, At Home I Had Become The Invisible Boy’ where the normal composure of the vocals is dropped entirely in favour of disgusted spitting about how “they’re sitting at the table and they’re talking behind your back”, or as enormous as the opening barrage of sounds from ‘Talking With Fireworks / Here, It Never Snowed’, each reasonably down-tempo contribution layered heavily with guitars, drums and various accompanying instruments to create the most massively uplifting of sounds. Importantly, the focus on the different parts of the music constantly changes throughout, creating an ever-shifting soundscape that doesn’t bore or tire easily. It’s like Explosions In The Sky with the gain mostly up and open-mouthed.

The secret to its success can probably be attributed to the near-perfect combination of influences; the balance between man and machine, between popular and progressive sounds. The vocals fit around the accompanying music so well they eventually become just another instrument to be built up and dropped down, not constantly present, the lyrics often not as important as the notes they produce; there’s even a suggestion that the songs might even survive without them, though they’d not be so complete. The song structures too are a well-weighted mix of catchy guitar lines and shoegazing effects, swooping lead parts that sit on the surface of your memory despite only being present for thirty or so seconds in a song which goes for another five minutes.

It’s no coincidence that the label behind this is FatCat Records. Responsible for releasing records from Animal Collective and Sigur Rós amongst others, they know what they’re talking about when it comes to big sounds. For eighteen months they waited for the Scottish quartet to hone both their sound and their songwriting and deliver unto them a gem, and this is the result; a multi-layered, massive masterpiece; nine songs both tender and touching yet at the same time powerful enough to knock your face clean off your head.

It may not be perfect – there’s the slightest suggestion as the album draws to a close that ideas may be running thin – but for a debut record to sound this accomplished suggests a promising future, and surely they’re in the right hands.