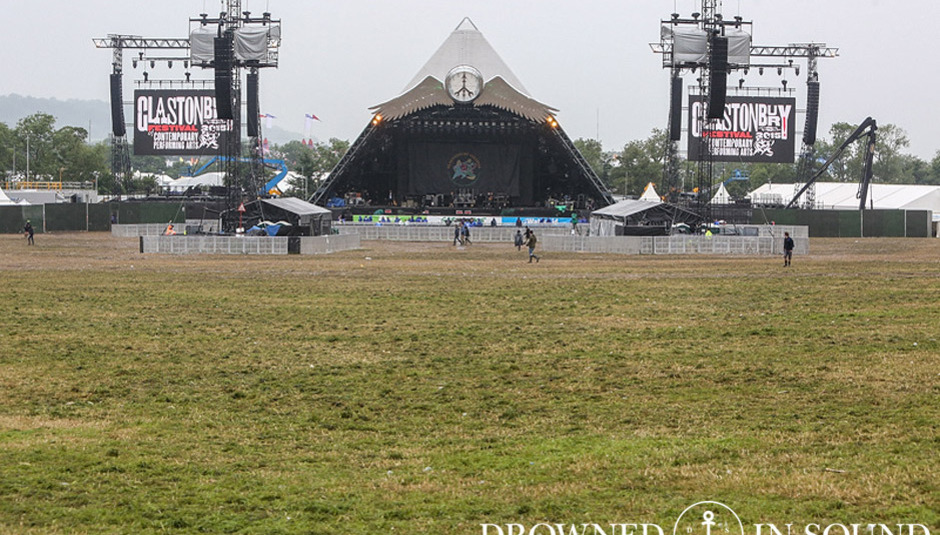 DiS scribes Mark Muldoon and Dom Gourlay head to Worthy Farm this week for the 2017 edition of Glastonbury Festival. Here's their guide on what to see.

“The organisation gets slicker, the stages get better, the infrastructure improves, its politics gets more vital and the late night areas get more ambitious. Its journey to grow into what it is today becomes more unfathomable and uniquely endearing, and as a consequence, its audience gets more appreciative. Glastonbury is totally nailing the job of being Glastonbury right now.”

That’s what we said about the festival in 2015. We were in a state of gooey post-festival euphoria at the time, but we stick by it. What with there being no festival next year, let’s make this a good one yeah? Here’s some of the things we think will be worth checking out, but first: we’ve done a Spotify playlist for you as well...

Not just any Radiohead set, either. Let us outline why this seems like a really great weekend to see Radiohead live:

They’ll probably play a few songs to celebrate the 20 year anniversary of OK Computer, which is quite a good album, isn’t it?

They did a bit of a tour last year, and were suddenly all too happy to give equal reverence to every part of their back catalogue. What with how long their set is, there should be room for a few of everybody’s favourites.

Anderson .Paak and The Free Nationals

Responsible for 2016’s best ‘late night entertaining’ album (although we’ve made you a playlist of the record that excludes the track ‘Silicon Valley’. It’s important you skip this track, trust us on this one.) Paak has built a fairly sizable level of excitement around his live shows - according to one British site not exactly constitutionally opposed to hyperbolic statements he’s “an artist that needs to be seen live by every fan of music regardless of genre preference”. Whilst we’re not going to recommend Classic FM listeners scour Viagogo for tickets to his next tour, his breezy genre hopping amongst soul, R&B, hip hop and funk should suit sunset on the West Holts stage pretty perfectly. (MM)

If you’re on the fence about Foo Fighters ‘as a concept’ and haven’t seen them live, they’re a band you should probably see at some point. It’s where they’re at their best, rather than the whole ‘millionaires manufacturing anger every three years’ thing their recorded output has become. In concert Dave Grohl could barely be a better raconteur, and if you only take a passing interest in the band then it’s possibly slipped your mind quite how many singles they’ve got that are ideal for jumping around a field singing your head off to. (MM)

As we pointed out at the time, Craig David on the Sonic stage was an ADHD crowd-pleasing highlight of 2016’s festival. As such, the show has been promoted to the Pyramid Stage this year. If you’re the kind of person that thinks you might enjoy the lyrics of his hit 'Walking Away' over the top of the beat from ‘Still D.R.E.’, then this might be the show for you (although he’s since released a new album, so there’s a chance he’ll ruin things by forcing that on us). (MM)

While Glastonbury has once again attracted some of the world's biggest names in music, there's also a host of artists making their debut this year. Here's 5 Glastonbury virgins we urge you go and see!

Annelotte De Graaf aka Amber Arcades can do little wrong at this moment in time. Last year's outstanding debut Fading Lines announced her to the world in big bold typed headlines while her latest release, the Cannonball EP further accentuates her status as one of the most prolific songwriters and recording artists around right now. Making her debut at Glastonbury this year on the Park Stage at midday on the Saturday, watch out for a second secret set (we're reliably told) over the course of the weekend then swoon to the musical delights within. (DG)

This time last year it's unlikely anyone outside of their native Brisbane would have heard of this four-piece. Now, with two excellent singles under their belt and a live show that really has to be seen to be believed, they're set to be this summer's hottest draw around the festival circuit. If you were to lock LCD Soundsystem, Deee-Lite, The B-52s and Right Said Fred in a room together and tell them to come up with a brand new half hour set it would probably sound like this. What's more, they're scheduled to play FOUR shows over the course of this weekend so there really is no excuse to miss them. (DG)

OK, so Jello Biafra is no longer in the band and has completely denounced this current incarnation of the Dead Kennedys, but the once in a lifetime opportunity to hear punk classics like 'Holiday In Cambodia', 'Too Drunk To Fuck' and 'California Uber Alles' at Worthy Farm is too good to balk at. And to be fair, his replacement Ron "Skip" Greer has done a pretty good job up front in the decade he's been with the band. Playing the Shangri-Hell stage on Saturday evening, those Ed Sheeran fans won't know what's hit them! (DG)

Say what you like about Katy Perry but she's one of the most interesting and genuinely outspoken pop stars this generation's had in a long time. Highly politicised, Perry has campaigned for both Barack Obama and Hilary Clinton in recent years and is also an avid spokesperson for equal rights issues such as same sex marriage, she's also one of the biggest selling female artists ever with over 100 million worldwide sales to her name. Expect a set jam packed with hits alongside a selection of cuts from her latest LP Witness. (DG)

One of the first bands I ever saw back in the late 1980s were Napalm Death. Then they were playing the back room of a grotty pub in Mansfield. This weekend they'll be entertaining thousands of revellers at Glastonbury. Live they're one of the most energetically brutal bands to have emerged from the underground thrash metal scene hence their still immense popularity some thirty-five years after forming. With sixteen studio albums to their name and songs that mostly last anywhere between four seconds and four minutes, their set is likely to be among Worthy Farm's most memorable. (DG)

For more information on this year's Glastonbury Festival, including the full line-up and stage times, visit the official website.