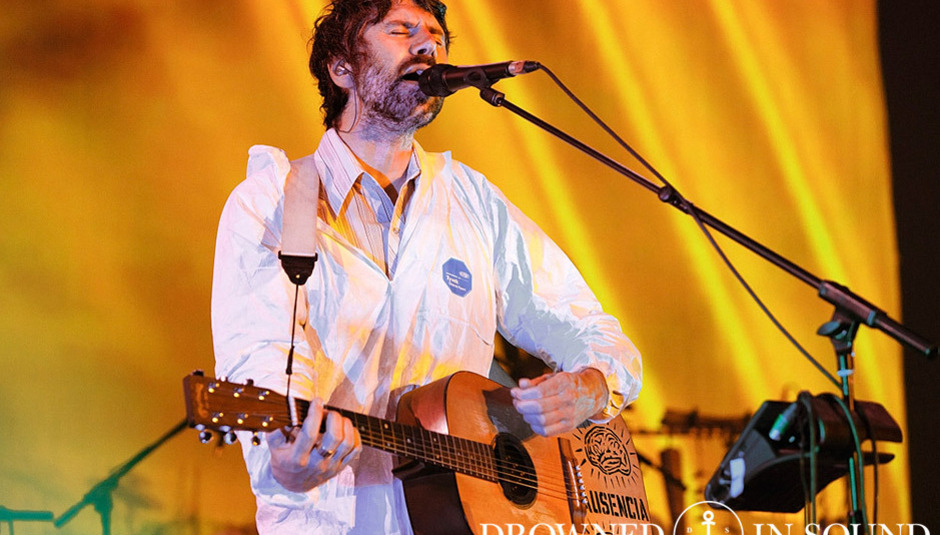 This coming weekend, DiS returns to Liverpool for the fifth installment of the city's International Festival Of Psychedelia. Or Liverpool Psych Fest as its come to be known.

Held in and around the Camp and Furnace art complex, this year's event once again hosts over 100 live acts and DJs across its four stages, along with numerous other activities including the Pzyk Cinema, Musings in Drone talks, and the Perambulator v.1 virtual reality collaboration between renowned illustrator Pete Fowler and Liverpool creatives Draw&Code.

Taking place on Friday 23rd and Saturday 24th September, tickets are still available priced £80 for the weekend or £40 per day. In the meantime, here are the 10 acts we're most looking forward to seeing and a mammoth 75 song playlist featuring many of the artists scheduled to play over the course of the weekend.

From their showstopping performance at January's Eurosonic event in Groningen to the release of debut long player Either That Or The Moon and beyond, this year has seen Desert Mountain Tribe rise from the psych-rock underground into genuine contenders for mainstream success without selling their souls. Comparisons to The Black Angels, The Doors, The Pretty Things and even Chris Isaak (yes, really) aren't wide of the mark, and their slot here looks set to be one of the weekend's most anticipated and ultimately, busiest.

This Minneapolis-based four-piece have been creating a storm with their potent blend of krautrock, shoegaze and classic psychedelia since debut LP On Plastic dropped in 2005. Now four albums down the line, they're as vibrant and relevant as they've ever been and one of the most transcendental live acts on the planet at the minute. Not to be missed.

Hailing from the city of Perm in the central (European) part of Russia, this energetic trio have been honing their motorik inspired dubgaze for the past couple of years, culminating in the excellent Ngan!, released in August of last year on Rocket Recordings. This marks their first ever visit to UK shores, and if the record is anything to go by, it promises to be a very memorable and momentous occasion.

Having initially attained recognition as one of The Pipettes, Gwenno has emerged as a uniquely uncompromising songwriter and arrangers of some distinction. Last year's debut Y Dydd Olaf won the Welsh Music Prize for best album while her mesmerising live performances go from strength to strength with every passing show.

Glaswegian outfit Helicon can lay claim to being one of the most prolific outfits on the psych-rock scene since putting out their first EP back in 2011. With a minimum average of two releases per year ever since, they've gradually established themselves as one of the most forward thinking collectives around. Fusing Black Sabbath style riffs with repetitive drones a la Loop circa A Gilded Eternity, their set promises to be among the weekend's most opulent and loudest. See you down the front.

One of the most inventive guitar bands this past decade. Four albums in, each one different to the last, they continue to confound and bedazzle. There's also a possibility they may play some new material this weekend as word has it album number five is on the horizon. A welcome addition to Liverpool Psych Fest and one that has the potential to be among the festival's finest and most memorable set.

This Tokyo-based five-piece have been creating opulent psychedelic masterpieces since 2013. Having already put out three LPs in that time, it's no surprise they've attracted a huge amount of interest in Europe. Last year's appearance at Liverpool's sister event Eindhoven Psych Lab was one of that weekend's most well received, and with an air of anticipation already surrounding their slot here expectations for a repeat performance are high.

Having initially formed for 2012's Spacefest! in Gdansk, this Polish collective has continued to make music ever since. Rotating its line-up with every passing event, this fourth edition of the ensemble features Ride's Mark Gardener and former Spiritualized member Ray Dickaty among its number.

A band that needs little to no introduction having been at the forefront of intelligently crafted psychedelic pop for over two decades. Despite going on hiatus for five years after the release of ninth album Dark Days/Light Years in 2009, their reunion last summer saw them play some of their finest shows to date. It's a massive coup for Liverpool Psych Fest to get the Super Furries on their bill, and Friday night's headline slot will no doubt be one of the busiest in the festival's history.

Having released one of 2016's finest debuts with The Album Paranoia, Reading's Ulrika Spacek have also earned a reputation for their cathartic live shows. One of the most promising new bands to emerge from the UK psychedelic scene in years. Come and see what all the fuss is about. You won't be disappointed. 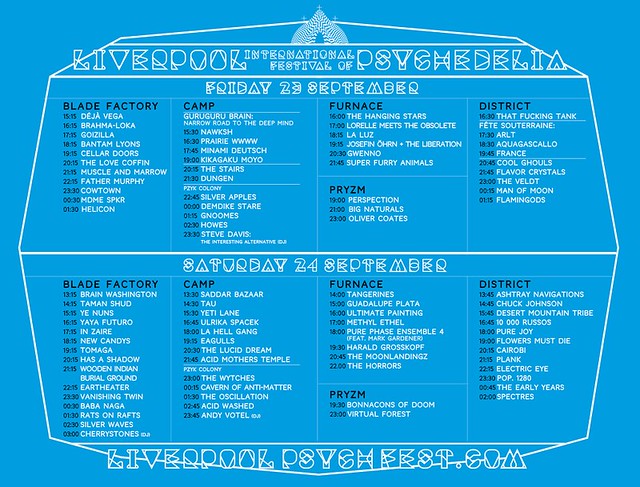 We also have a Spotify playlist courtesy of French label La Souterraine and the French Music Export folks, who are putting on a showcase at the festival entitled Fête Souterraine.