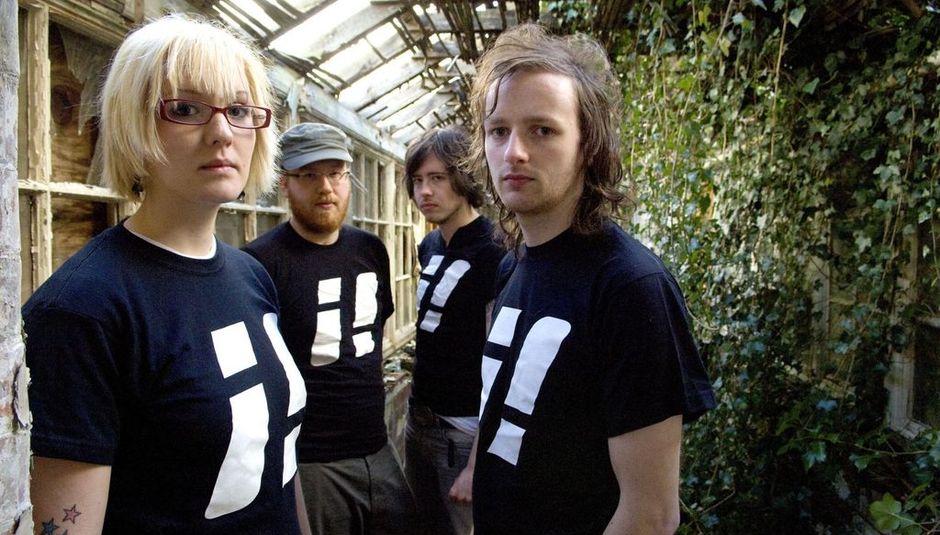 When Forward Russia released their debut album Give Me A Wall in 2006, they were part of the exciting nucleus of an electric web of burgeoning Yorkshire bands garnering a lot of attention from the national music press. They attracted critical adoration and with it a loyal fanbase, thanks in part to a relentless touring regime combined with a memorable live show. However when the band announced an unexpected hiatus just three months after the release of their second album, there was to be no farewell tour. Just cold turkey for a legion of dedicated fans unable to obtain a last live hit.

Fast forward almost six years later to 2013 and the much-loved Leeds venue of the Brudenell Social Club, now synonymous with the local scene and intertwined with the band’s history, were preparing to celebrate their centenary year. And it was the Brudenell’s manager Nathan Clarke who managed to coax the band out of their hiatus for one last gig to mark the venue’s hundredth year in November 2013. Whilst the gig was busy selling out in less than one day, journalist and photographer Tom Airey had begun contacting the band asking to document the process of their reunion. He was fortunate enough to be granted access to record everything from the first tentative rehearsals, right through to each cable-choked yelp and furious guitar pick of the “final gig”. As well as talking with those most closely affiliated to the band, from management to their biggest champion, Steve Lamacq. Tom’s resulting film, streaming first on DiS below, superbly captures both the energy and emotion of the evening and what it meant to both band and fans.

Nearly a year to the day since the gig, DiS’ Daniel O’Dell caught up with all four of the band to reflect on the reunion, the film and the future…

When you think back to the night of the Brudenell gig, what are your abiding memories?

TOM: I remember being more nervous than usual. It was great fun though; we got to see loads of people we hadn't seen for ages. The majority of the people who were really important to the band - people we'd worked with, people we'd befriended along the way, and the biggest fans, were all in one room, so it was a terrific atmosphere. And the gig wasn't a total disaster, which was a bonus!

ROB: For me, the Brudenell gig was the perfect 'ending' for the Forward Russia journey. To have a sold out crowd singing every word is a feeling like no other. It was the first time the girlfriend saw us play as well, as we got together after the hiatus. I would tell her the odd story about my past life and I don't think she quite believed me so it was great for her to share that moment with me.

What was it like watching the gig footage back?

WHISKAS: Funny, sort of funny to play a gig with that kind of reaction at the Brudenell that was 'us'. Funny watching us do the kind of thing we were doing a few years ago, creaking around the stage.

KATIE: I've not seen loads, just the bits Tom has put into the little film. Looks good doesn't it? It doesn't seem like it's me / us. It's like watching some real band instead of some jokers trying to flog a dead horse ha.

Did you expect such a reaction to the initial gig announcement?

TOM: Not at all. I expected it to sell out eventually but to do it in one day was unreal. It was very exciting and one of my favourite days being in the band, probably, just because everyone was so positive.

WHISKAS: We didn't feel the need to give many people the heads up about the announcement, just that if people wanted to get tickets, yeah it might sell out in a few weeks, hopefully even a week or so. But one day was ridiculous, and I was on the phone to the record shops in Leeds on the Tuesday morning to try and get the last few tickets to make sure all my mates could get in.

What was it like being followed around and rehearsing with cameras present?

ROB: Easy! I don't actually remember them being there much. None of us particularly play up to camera, so it was all business really. We were too busy trying to work out how we played all the songs.

KATIE: Yeah it was a bit weird. I used to take a camcorder with us on tour so I used to bug people with that, so it was weird being on the other end. I think on the day it was probably the last thing on my mind though.

What is it like getting reacquainted with past songs, some of which you created nearly a decade ago?

TOM: I think I found it easier than anyone else, just by virtue of having the easiest job. I didn't really have too many problems remembering the lyrics or structures. My already limited keyboard skills were even worse than before, though; I had stickers on the keys indicating the correct starting point for each song!

I do remember feeling like I was doing an impression of myself singing at first. That was really, really odd. Luckily that passed after a practice or two.

WHISKAS: I could generally remember the key riff of the songs, but whole chunks of the rest were gone for me. There were probably 2 or 3 bits, that even by the gig I was blagging a bit because I couldn't remember them.

With the Brudenell gig selling out in less than a day was there a temptation to play more shows or festivals further afield?

TOM: There was some brief discussion that it might have been nice but no one offered us anything and we weren't going to go out looking. I think it was the right thing in the end. A lacklustre show elsewhere would have spoiled things.

KATIE: I would have loved to. But then you think “why are we doing this?” and at the end of the day we did it for Nathan and the Brudenell and people that really gave a shit. I appreciate that some people will have missed out ( There's loads of bands I love that split and played 1 or 2 gigs - it's not like I can just jump on a plane to Washington DC to see Faraquet). I guess if we played any more shows it would become a - "well what monetry value would you put on us?" and I don't like the idea of that. I'd do it because I want to play and be on stage having fun making music and seeing kids rock out, not so that I can upgrade my lifestyle a bit.

WHISKAS: Yeah, there was, I think we briefly considered doing another day at the Brudenell, but didn't know how we'd feel after this gig, and if doing another one might taint it. Similarly, a couple of people sounded us out about a London gig, but we weren't overly interested and nothing special enough came up, unlike the Town Hall gig.

After the Brudenell gig you went on to play Leeds Town Hall, how did that gig come to happen? Did it require a lot of discussion / argument?

WHISKAS: There genuinely wasn't any plan to do anything else after the Brudenell gig, and it was a good month or two after it that we got asked to play the Town Hall. I'm closely involved in Live At Leeds, organising an industry day called The Unconference and a Football Tournament over the weekend, and the lads who book it casually mentioned one day they were stuck for a headliner for the Town Hall, and it could be a laugh if we did it. It was probably the only gig / slot that would have been enticing, and I think we all quite fancied the idea of playing the Town Hall as it's a great venue.

KATIE: I can't really remember. I just said yes. Seemed like a good idea. I enjoyed that gig a lot more because I felt less pressure about it being a one off and messing up that one night. And again we were in good company with I Like Trains on the bill too, and things logistically were a bit easier having done it once before.

Have the reunion gigs done anything to re-shape your memories and feelings towards the band and what you achieved?

ROB: Definitely. We had kids coming up to us after who never saw us live the first time around and they were just as excited about the whole thing as people were back in the day. That's really humbling. For me, the gig felt like a celebration of what we achieved.

TOM: It's probably made me a bit more proud of what we achieved than before: doing the gigs made us all reassess the band and what it's meant to our lives. It was really gratifying to see how much the people who liked our music cared. You see that when it's happening but you're so exhausted and bewildered that you don't fully appreciate it.

Could there be a future for Forward Russia?

WHISKAS: I dunno, I've pretty much said 'not' twice and we've done these so you never know. I don't think any of us are in the place to commit to the band again and we sort of enjoyed the two gigs for what they were - it would be a shame to do something else that became unenjoyable.

ROB: I doubt it. Everyone has their own commitments that would make touring / writing / recording really difficult. Perhaps we'll do another show in 10 years, fatter and balder.

KATIE: I'd never say never. There are two things I would really like to do though - Primavera and Glastonbury!