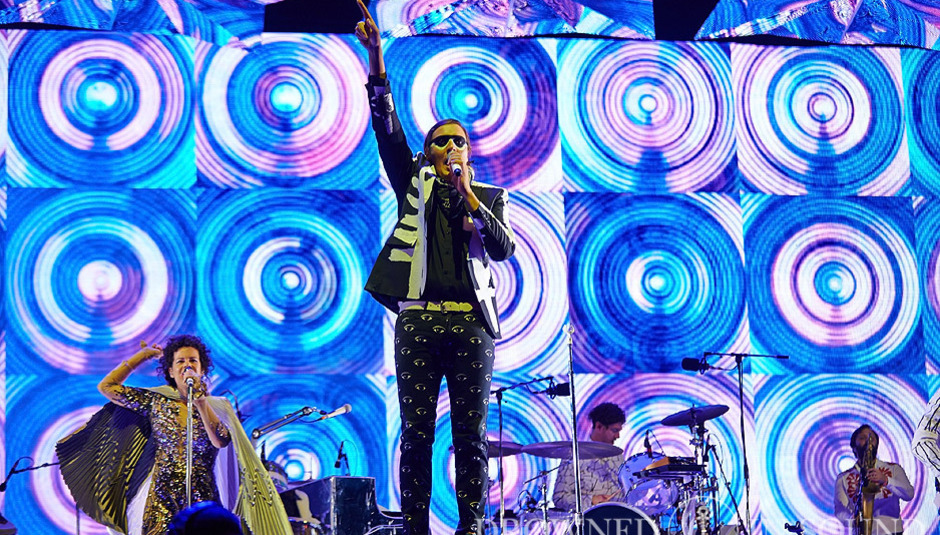 HELLO GLASTONBURY! Yes, it's that time of year again, when every five minutes someone stood on a stage can be found hollering those two words at a Worthy Farm audience. People then go WAHAHA-KRRRRSSSHHH-WOO! each time they say it. Meanwhile, the BBC are there capturing these moments and making a HELLO GLASTONBURY montage. Whilst shooting this annual art piece, the beeb also have their cameras pointed at six of the festival's stage, and here are some highlights from Friday 27th June 2014.

Oh and before we lose you to the wonders of digital stream, you should join in the Glastontelly chatter over on our forum here to find out who to watch live online and what was good and what confused Gemma Cairney today....

Those New Yorkers in black have a new album on the way and they performed new song 'Anywhere' during their contender for set of the weekend, which you can watch in full here.

Their set live on BBC telly last night "trended" on Twitter and whatever you might thing of their hulking Mercury Rev gone Talking Heads they didn't half put on a headline show (although Win, we're not sure you needed to paint on those sunglasses!). You can watch their full set on the iPlayer here, see our In Photos gallery and watch 'We Exist' by bashing the play button below.

Don't they grow up quick? Doesn't seem that long ago Wild Beasts were a new band that we didn't shut up about, now they're doing this. Watch Wild Beasts full set on the iPlayer.

Ahead of their set tonight (which you can stream online over on the BBC site) James Dean Bradfield popped into the BBC Music teepee to play an acoustic version of 'Walk Me To the Bridge'.

Keiran Hebden "killed it" last night. You can watch the full Four Tet set here on the iPlayer, but this clip of 'Parallel Jalebi' will give your whistle a whettening:

If they got you in the mood to dance, here's 'Recover'. Full Chvrches set on the iPlayer here.

Now that you're dancing on your bed/sofa, here's 'Chain My Name'. Full Polica set on the iPlayer here.

She's become a bit of a sensation, hasn't she? 'Out of the Woodwork' isn't one of her best tracks, so maybe watch the full set.

And we leave you with the clattering Pavement gone 'Marquee Moon' of Parquet Courts.

1) For more tracks and full sets head over to bbc.co.uk/glastonbury or if you're not in the UK check out the BBC's YouTube channel.
2) Glastontelly 2014 forum thread.
3) Check out In Photos galleries from Glastonbury 2014.