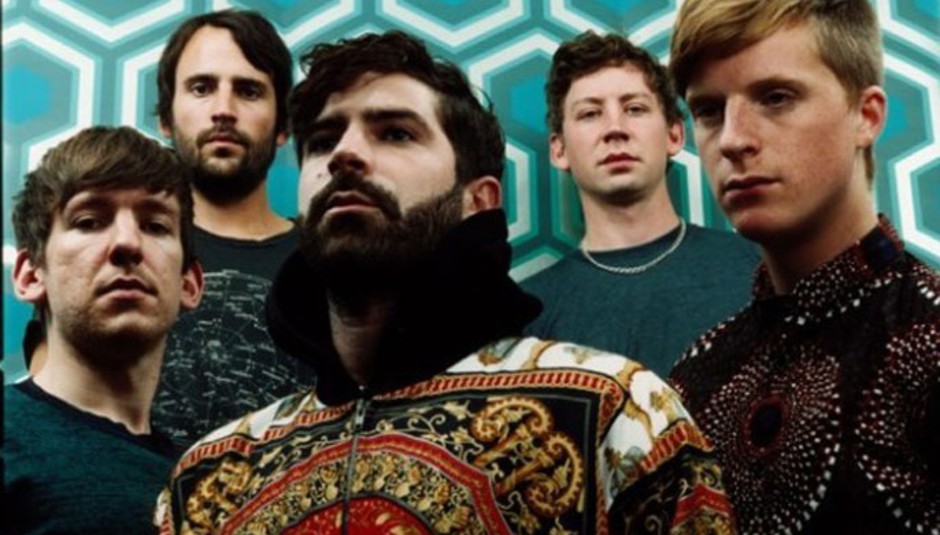 “It’s kind of psychobilly,” is not something you’d ever have expected to hear Yannis Philippakis say about a Foals song. It’s now been more than five years since the music press (we’re pre-blogosphere at this point) went nuts for ‘Hummer’ – the song which, along with ‘Mathletics’, turned Foals into cult heroes overnight. Within months they were posing for magazine covers, and it wasn’t long until they were massive enough to become a byword for hipster guitar music.

For some they represented the re-intellectualisation of indie in the messy neon aftermath of nu-rave. For others they were overly fashionable pseudo-math-rockers for NME-reading wankers. The consensus now, however, seems to be that Foals are one of the most important British guitar bands of modern times. They’re one of a small number of UK acts who can unleash a comeback single, as they did four weeks ago with ‘Inhaler’, and have it treated as a major news event by practically every music publication going.

To put it simply, the music media love Foals, and they love them because they can’t get rid of them. They’re a gang of intelligent university drop-outs who’ve never been part of a scene, a sound or a movement that can be swept aside when it becomes uncool: they keep catching us offguard.

The song in question comes at the end of Foals’ first proper live show in a long time. It sees Philippakis howling like a bona fide bluesman – “I know I can’t be true, I’m an animal just like you” – as Jimmy Smith pounds his guitar like he’s just discovered rock ‘n’ roll and Jack Bevan fills his drum parts with jazzy frills. It’s the most un-Foals song Foals have ever written: completely uncool, with more false endings than a latter-day Foo Fighters gig and any shred of intricacy bleached out by steadily building psychedelic strumming. It concludes an hour of music that leaves us with more questions about where Foals are going (and indeed, what the hell third album Holy Fire will sound like when it’s released in February) than it answers.

The show opens dramatically with an instrumental jam. Smith tremolo picks his guitar severely, Bevan thumps his floor toms and Philippakis unravels arpeggios with increasing intensity. These clusters of chords become smooth licks that wouldn’t be out of place on a classic rock compilation, until a mountainous riff of Biffy Clyro proportions arrives and suggests that ‘Inhaler’ wasn’t necessarily a curveball and that Holy Fire really will be Foals’ heaviest work yet.

Naturally, ‘Inhaler’s chorus erupts in the encore with equal power, sounding strangely more brassy than it does on the radio. Its big beat drums and glossy riffs are completely at odds with the complexity of the track previous, ‘The French Open’, marking it out as a major departure, and a surprising one, even for Foals. The only other new one we get is the one the band premiered on Later… With Jools Holland a fortnight ago, ‘My Number’. In a way, this track is the most confusing of the lot, in that it has nothing whatsoever in common with the other new material we hear – imagine an slinkier, sassier, more sugary sweet version of ‘Miami’, but exponentially more danceable so that even Yannis pogos around the stage to it.

As ever, Philippakis is a delight to watch perform: when he’s not waving his arms like a rapper and standing on the monitors, he’s climbing an amplifier stack and poking his head through a ceiling tile, or doing a lap of the crowd and taking a detour to rock out, standing on the bar.

The crowd, on the other hand, don’t quite know what to make of it all. Sure, they go nuts when Foals drop ‘Balloons’ early on. They shush each other and sing along softly to ‘Spanish Sahara’ ahead of its blissfully commanding climax. And they respond with the requisite level of hysteria when encore-closer ‘Two Steps Twice’ kicks in so vividly it feels like you’re reaching an orgasm as you go off the edge of Oblivion at Alton Towers.

But there are a few who clearly didn’t get what they expected tonight. After all, this is a small tour of intimate venues (the bingo hall of a working men’s club in this case) ahead of a new album release. The point is to road test new material, right? Not just play four new songs, two of which you can find easily enough on YouTube?

Introducing the final song of the night, Philippakis tries to explain. “We wanted to play more new ones,” he says, “but the new ones were hard to find”. The heckles come thick and fast at this point, but they aren’t cries for songs Foals have skipped like ‘This Orient’, ‘Hummer’ or even ‘Cassius’. “Play some new songs,” the crowd shout. “Play a new one.”

But Foals don’t. They play ‘Two Steps Twice’ brilliantly and then they are gone. And having teased and baffled us all night, they leave us even more intrigued as to what Holy Fire will sound like, and even more excited to get our hands on it than before. The clever gits.