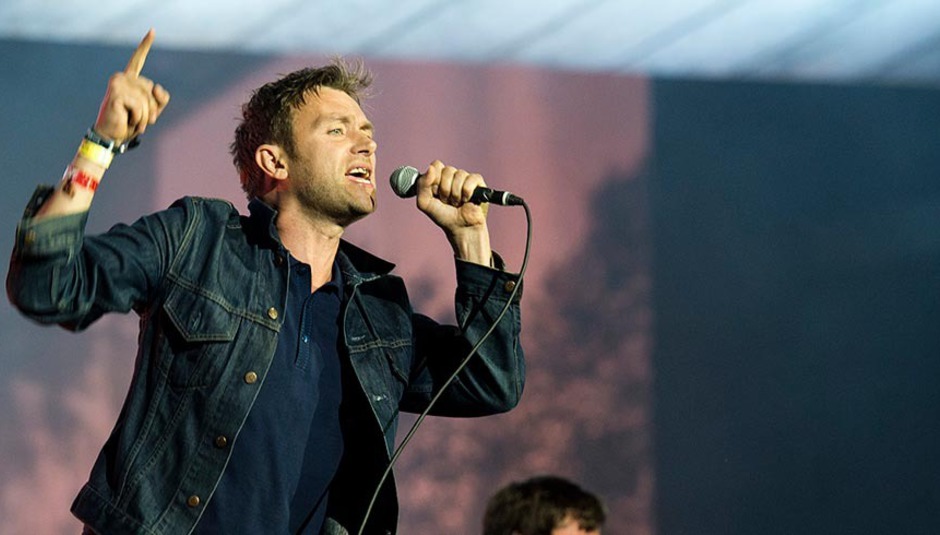 DiS sent Eli Lee to Hyde Park, and here is her report...

So that’s it for the Olympics. In Hyde Park, we get BT London Live's Hyde Park Closing Ceremony Celebration Concert (ahem) with an incongruously brilliant line-up: Blur, The Specials, New Order. Across town, there’s the Spice Girls and Take That. Only after both end do I see the cynical tweets from over there, slamming the gaudiness, the bad acts, Sebastian Coe. Here, though, there’s a delicious calm. We’ve been tipped out onto the streets with those famous words: “The days they seem to fall through you well just…let them go,” resounding in our heads. Is Damon talking about zen-like non-attachment or drug-addled carelessness? I never figured that one out. In any case, Blur close the Olympics with ‘The Universal’ and it’s beautiful and right. One Direction, Muse – even Neil Tennant in a conical hat – seem impossibly distant.

The evening here started with Bombay Bicycle Club, but you’ll have to forgive me, I missed them. New Order are next, and although the sound’s pretty puny, hearing them play ‘Ceremony’, ‘True Faith’, ‘Blue Monday’ – and especially the gleeful ‘Temptation’ – is good fun. I’d always wanted to see them in a darkened room somewhere, imagining relentless synths, irrepressible dancing, dirty drugs – but in sunny Hyde Park, squashed in between big-screen Olympic action and mass hamburger chomping, the intensity dissipates. The music’s still faultless; it’s just a shame it’s not blasting out any louder. They end on ‘Love Will Tear Us Apart’, the words Joy Division helpfully scrolling on the screen behind. Even though this song has ended far too many indie discos, meaning all I can associate it with is the gloomy anticipation of a mother of a hangover, there’s still a real thrill in seeing it played live.

The Specials are next, accompanied by violins, and they’re a perfect early evening band. No Jerry Dammers, just as there was no Peter Hook for New Order, but it’s impossible not to enjoy it. We get ‘Too Much, Too Young’, a raucous ‘Concrete Jungle,’ a laidback ‘Doesn’t Make it Alright’ and ‘A Message to You, Rudy’, as infectious as ever. Full of jaunty, cool conviction, I’d like them to have played for much longer.

But it’s time for Blur. The air prickles with excitement. They bound on and launch into ‘Girls & Boys’. That legendarily catchy riff, that slide into that sexy beat, Damon sings “Street’s like a jungle” – and we’re with him. Every word. Except the chorus, which I swear everyone still gets confused. But already, this couldn’t be better. Damon bounces around like a cheeky kid, Alex poses languidly, at the back is trainee solicitor Dave, and then there is Graham: looking down, ignoring us, giving me thrills.

They play ‘London Loves’, ‘Tracy Jacks’ and ‘Jubilee’ in quick succession and then the pace slows for ‘Beetlebum’. When they crawl to the luxuriant line that, more than any other, pulls me back to the confusing mess of being a ‘90s teenager: “And when she lets me slip away…”, we all sink along with it. Nostalgia, yearning and debauchery swell up inside. Straight after, it’s ‘Coffee & TV’, mainlined straight from Graham’s lo-fi dreams of fuzzy American indie. It sounds as uselessly cosy as it always did, a song to wrap yourself in. And while it’s odd to be surrounded by thousands of people all singing “sociability, it’s hard enough for me…”, this touches on one of the greatest aspects of Blur – the contradiction between their fondness for isolation – “running away from this big, bad world” – and the fact that they’re populists, down to the bone. The reconciliation of this smart outsider vibe with their crowdpleasing antics was always proof of how brilliant they were – a band who could simultaneously embody laddishness, crude aspirationalism, the simple joys and woes of being British, and yet be at an angle to it all, slipping effortlessly into different registers. The next song, ‘Out of Time’, perfectly proves this. Damon dedicates it to the Olympics, which seems fitting – Londoners having over the past few weeks been spun out of our workaday rhythm, our minds opened up to minor miracles.

After the rarely-played but gorgeous ‘Caramel’, we get back to the hits – the irredeemable yet irresistible ‘Country House’ and then ‘Parklife’, both of which get mass sing-a-longs. Phil Daniels bounces onstage for ‘Parklife’, hams it up for all it’s worth and it’s great. Inexplicably, Harry Enfield minces on too, dressed as a tealady.

After ‘Advert’, Damon pays his respects to the fantastic Mo Farah. The audience chants “Mo, Mo, Mo!” Damon does the Mobot, we all do the Mobot. “That’s the easiest thing I’ve done all night,” he says. And then they kick off ‘Song 2’. Fifteen years later, it still stands up: two perfect minutes of chaotic illogic and compressed brilliance. But then things get sombre with the opening thrums of ‘No Distance Left to Run’. What a song. Graham’s mellow, juicy guitar, the sweet hopelessness of Damon’s voice – it’s as sadly sexy as ever. It drifts into the night sky and the evening seems to momentarily close in on us.

And then ‘Tender’ begins. If ever there’s a song to feel conflicted about, it’s this. It might be utterly inspired, but these days, it’s got something of the ‘Angels’ about it – and by ‘Angels’, I do indeed mean those purveyed by the dread Robbie Williams. The ‘Angels’ effect means that ‘Tender’, too, has turned into a vehicle for mass public catharsis. Hearing it live hurtles me back to the summer of ’99, holed up in my room studying for A-levels, desperate to get to university, and goddamn just waiting for that feeling to come – so yeah, I’ve got a fair bit of singing to do. But when I stop, people sing on. When Damon stops, people sing on. It won’t end. “Blur for Pope!” someone shouts. I decide we need lullabies like this more than we dare admit. In front of me, a guy sniffs poppers. Teeming catharsis around him and he’s doing poppers? Fair enough. Graham does his, “Oh my baby, oh my baby,” lament and my 19-year-old self tingles with lust. Words that fuelled a decade of straight-up Coxonesque crushes.

Finally the epic singalong staggers to an end. Time for ‘This is a Low’. Damon looks tired now, his face etched with sincerity as he sings. This song’s 18 years old – how can that be? But then we go back 20 years for ‘Sing’, sadly underwhelming as the sound system just isn’t up to it. ‘Under the Westway’ is next, a lush paean to West London written especially for tonight, and complemented by the giant mock-up of the overpass that stands onstage. It reminds me that in the days before the dominance of East London, west London was the brightest corner of the city. Seems a very long time ago now. ‘End of a Century’ and ‘For Tomorrow’ dig the point in. Damon singing about being lost on the Westway and taking a drive to Primrose Hill gets me going again. I’ve lived around this area for 25 years, loved and hated it, and tonight I’m in love again.

In front of me, the guy on poppers has doubled over. We wait to see if he’s okay. Five minutes later he reels himself up. “What happened?” he asks. His friend laughs hysterically. And then it’s our lucky day. Same as 17 years ago when he channeled ‘A Clockwork Orange’ to tell us that the future was here, Damon’s intense and serious for ‘The Universal’ – though there’s less put-on cheek now and more real concern. Maybe, though, this time this isn’t because he’s thinking about our zombified future. Maybe it’s because tonight might be Blur’s last ever gig. If that’s the case, then it’s a truly magnificent one. And we all yield to it in the only way we know how: singing along, arms in the air.

It ends. We want more. ‘Charmless Man’ someone yells wildly. The chorus of ‘Tender’ rises and falls as we disperse. I think we just can’t believe it’s been that good. Is it possible that a band who make us feel so much like ourselves can be this good? All credit to Blur – the answer’s yes.