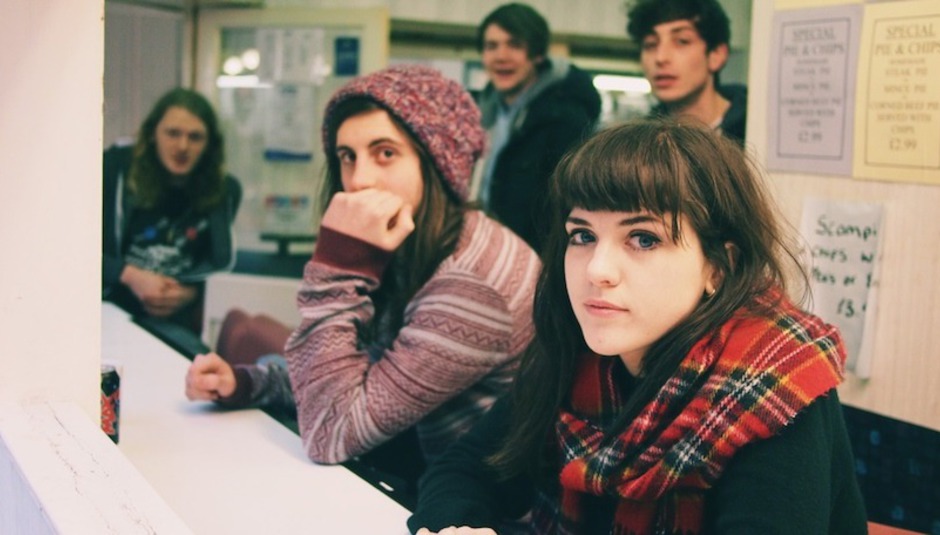 DiS' editor compiles a mixture of tracks (including a special premiere!), some mixes (one of which was made especially for you DiS readers) and a selection of things that have cropped up in his social feeds and inbox this week, for you to have a listen to over the weekend...

Let's kick things off with a special premiere of the forthcoming single by I-can't-believe-they're-not-far-bigger-yet new band from the North East of England Let's Buy Happiness (pictured, above). This is their forthcoming single, entitled 'Works Better on Paper' and its a gentle song that flits in the same sort of doe-eyed space as The Sundays. Singer Sarah Hall sounds a little bit like a sleepy Regina Spektor backed by a slightly sozzled Antlers. It's a lush slice of uplifting melancholy and it's out on June 11th via Ghost Arc. For upcoming live dates and more visit letsbuyhappiness.com. Oh, and if you're wondering just how you go about buying happiness, this month's Wired has the answer.

Nick Zinner with an Orchestra

Wondering what the guitar God from the Yeah Yeah Yeahs gets up to between albums? Well, it seems he heads to the land down under to work with the Australian Youth Orchestra, the result of which sounds like a glorious mixture of Explosions in the Sky and, like, proper classical music. Perfect for your Sunday morning.

Watch Nick Zinner and members of the Australian Youth Orchestra and other great gigs on Moshcam.

Charlotte Hatherley's (Ash/Bat for Lashes) new space-race project released a new single this week, and I ended up DJing at the launch of it. Have a gander at the video for the single:

Alessio Natalizia (aka Banjo or Freakout) and Sam Willis (of Allez-Allez), are the duo also known as Walls. Last year they released Coracle an album of swooshing hazy electronica on Kompakt. On Monday they release Coracle Remixe compiling their favourite remixes of tracks from the album, so we started to wonder, what are their all-time favourite remixes? We didn't just ask this aloud at our desk, we bashed off an email and this is what the band fired back at us...

And here is a sampler from their forthcoming remix album:

If those Walls mixes didn't get you ready for the weekend, then this certainly will. It's a 24minute mix by Ryan L. West aka Rival Consoles created for Soundcrash, ahead of his performance at their London warehouse party on June 2nd alongside Luke Vibert and 808 State Soundsystem (tickets).

"I was interested in faults and buzzing and imperfections and dub bass lines with slow house rhythms. I used analogue gear and sampling, with less emphasis on change and more emphasis on old school tone and mood." – Ryan L. West

And, well, it's rather awesome (hence sharing it with you!). We've got a pair of tickets to give away to the warehouse party, as well as Rival Consoles and Luke Vibert CDs to give away. To enter, simply comment below answering the following question: Which label is Rival Consoles signed to?

You heard their new record yet? Here you go (oh, and it is the first of four albums they are releasing this year!):

DiS favourite Emmy the Great has a new video to accompany her latest single ‘God of Loneliness’. It is less of a run of the mill video and more of a short film directed by Chris Boyle starring Isy Suttie (Peep Show) and Shazad Latif (Spooks). Described by Emmy as 'horror rom-com', it is set in her favourite Brutalist tower block, west London’s Trellick Tower. Watch it with your eyes and ears here:

They played our DiS party in London on Wednesday and we premiered their new video. Just in case you missed it, here it is again:

What do you get when you cross rock'n'roll and shoegaze? Well, sometimes it's bands like the Warlocks or A Place to Bury Strangers, but in this case it's the Banshees'n'Stooges-inspired expansive sound of Dark Horses, and it's an altogether more intoxicating, erring on the side of ethereal aural experience that that combination of genres might suggest. I mean, it's sort of like M83 with a bruised heart. They recently did a stint bothering Kasabian's arena audiences and Lisa Elle and her gang play their first UK show for a while in London show at Electrowerkz on 13th June. The gig also features a performance from Stockhausen student and current Brian Eno collaborator: singer songwriter artist EBE OKE who's well worth a listen too. Here's Dark Horses' forthcoming single, exclusively premiered right here, right now, on DiS:

He's back, new material on a new label (Weird World), and a new album Total Loss due out in the autumn. Here's a comeback track...

And let's fire you into the weekend with this...

This is DiS' May Spotify Playlist...

...what's been rocking your stereo this week?