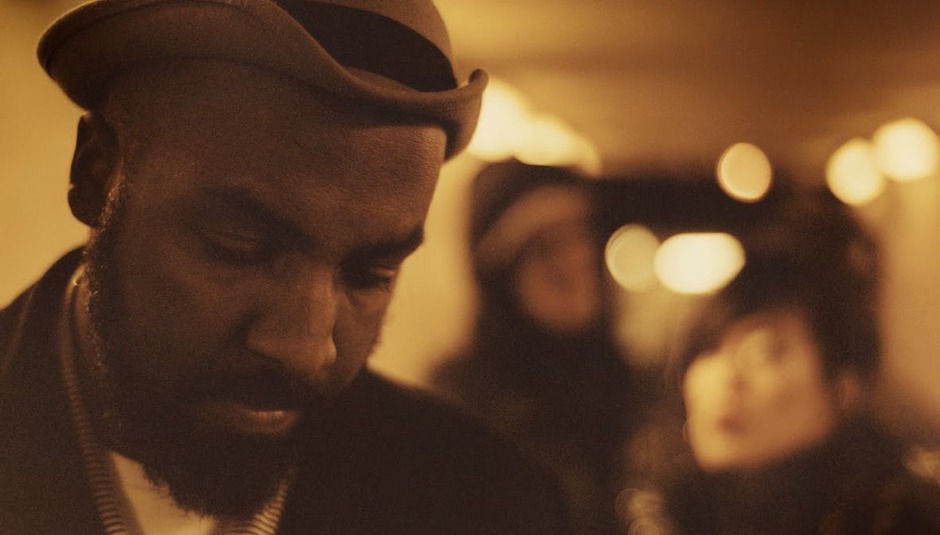 Weekend Listening: Stream the King Midas Sound album Without You

Something to listen to and read about over the weekend...

The Hype Machine have posted Without You, the fantastic record from King Midas Sound which is out next week on the brilliant Hyperdub label. Have a listen, and then have a read about it...

If ever there was a man born too late, it's Kevin Martin, a post-punk legend in every way but birthright. On one side of his C.V. is listed collaborators like John Zorn. Justin Broderick, Keith Levene, Alec Empire, and Blixa Bargeld: part of a longer register reading like a who's who of extreme music. On the other side sits Cutty Ranks, The Rootsman, Roll Deep, and an unending roll-call of ragga vocalists, including Trinidadian spoken-word poet Roger Robinson - Martin's other half in King Midas Sound. All told, as a facilitator between Bohemia's most vicious incarnations and Afro-Caribbean music - post-punk's greatest gift to music - he has no contemporary equal; a one-man cultural nexus. That The Bug's ragga classic London Zoo was conceived as an alternative soundtrack to Coppola's paranoiac The Conversation, just about epitomises his unique artistic duality. First and foremost however, Martin, like many of his spiritual forefathers, is a prophet of doom.

When contemplating Waiting for You's extensively reworked, re-voiced reissue, Without You, it is mouth-watering to imagine how Martin, at his best when drowning in bad vibes, might address disconcerting developments in the interim between the two albums. Because, a measure of what Martin and his stable of urban seers have, for years now, been warning of, is becoming reality. Take 2010's Student Protests, a walk on parliament turned misguided riot, played out in the setting Martin's hometown. A student event of all things, which, whether the crusties and the anarchists like to admit it or not, prefaced the rise of 'occupation' activism. Unwittingly, even Martin played his part. As legend has it, The Bug's 'Skeng' was playing as the siege of Millbank Towers breached Tory HQ.

Moreover, infinitely more worthy of Martin's attention, and right up his bleak and dystopian street, was August's 'Greedy Riots': pound-for-pound this summer's best zombie holocaust (In Dawn Of The Dead, the undead, although resolutely dead, instinctively gravitate to the mall...it makes for a great analogy). According to the finest in August's late-night telly viewing, it was 4000 whelps doing some after-hours clothes shopping. Written across the face of the Tariq Jahan, the father of a murdered hit-and-run victim, what we actually watched is a Britain without politics, without the family unit, without hope, or just simply, without.

So if Martin has long been a champion of post-punk's sonic principles, now is an opportunity to be so content-wise, considering that we currently traverse an era of jittery flux every bit as charged as post-punk's backdrop of pre-Thatcherite angst. Granted, although possessed of a queasy, serpentine menace, it's not tension that King Midas Sound do best, exactly. Rather, as is true of most pre-mainstream dubstep, KMS “place less emphasis on the sensational, and more on the surreal atmosphere of accepted dread” - as was once written of Aussie Gangster film, Animal Kingdom, to draw a tenuous parallel.

So, fair enough, it's fear, not tension, that is their métier. And isn't it moronic to superimpose your expectations on an unwitting remix project? Next time on the DrownedinSound: 'Why Beyonce was exclude Sunni interests in the Gulf region'. But really - if the time for musical friction isn't now, then when? More to the point - if not Martin, then who? Dubstep's most high profile and abiding ambassador of socially-conscious Roots culture, a firm favourite of anti-capitalists, and one of London's most culturally omniscient, most intense voices, for Martin to curate something of penetrating significance here, seems almost like a question of duty.

Well, the Au Pairs dub-pop gem 'Headache For Michelle' comes to mind, and Lesley Woods call to punk's heroin casualties: “You're not a threat, when you're out of your head”. Without You is too much amongst the stars, too strung-out, to be militant. It's a great and wondrous beast in many ways, but in the wider context, two years on from 'Waiting For You' the frequently dark atmospherics seem like empty sentiment now; redundant, or worse - complacent. As the press release rightly claims, at times Without You plays like “a battle in heaven”. But Hell, or London on the night of August the 8th, goes ignored.

The first thing that strikes you is the ensemble cast. Bringing together a dizzying array of global luminaries, Martin has enlisted Flying Lotus, Hype Williams, Nite Jewel, Green Gartside. Gang Gang Dance, Joel Ford (of & Lopatin fame) and Kode 9 to do his bidding. None of whom have ever been overly interested in exploring the real world. Inner space, outer space... all fair game on Without You. As are the more phantasmic aspects of inner city life (see sexy Cooly G's nightmare club seduction on 'Spin Me Around'). And indeed, as is romance - on slow-burner 'Without You'. Turning the bones of Waiting For You's dub instrumental 'Blue' into this album's title track, the D'n'B producer uses his falsetto voice to create something unctuously smooth, like The XX and P.M. Dawn merged and fed through an echoplex. It's fine and sturdy and enjoyable, but after six more just like it, you can't help but feel an opportunity is being squandered.

If you wanted to be charitable, you might say it's par for the course, this millennium. As Salon.com's Stephen Deusner recently observed “Instead of vocalizing opposition to the war, [Bush-era artists] worked more to document life during wartime and to examine their own uncertainty and alienation”. Which is fine by us, because The Clash were artless anyway, Pil never cared for the details, and the most effective political album of 2011 consists of a Canadian indie-boy dreaming of cocaine (as Rome falls around him, before going Kaputt). Then you listen, on here, to Gang Gang Dance's gawky refix of Waiting For You's most weighty number 'Earth A Killya', or Nite Jewel's casiotone spaying of 'Lost', a reedy, weedy synth tiddler cut from a once nasty funk tune. And Suddenly Deusner's theory falls flat on its face, at least where Without You is concerned. Flylo's own reworking of 'Lost' is equally inconsequential, all chirps and bleeps and next-to-zero drive, while KMS staffer Kiki Hitomi makes a mess of 'Cool Out', on its reworking here as 'Tears'. Most damning of all, on 'Say Something' (a re-voiced 'Goodbye Girl') Joel Ford's mock-R'n'B vocals create an air of ironical insincerity Martin struggles to recover from. Besides anything, it runs so contradictory to the producer's ethos, it's hard to believe he put his name to it.

On the upside, on Hype Williams' 'Sumtime' the mysterious duo are unsettling as only they can be, while on 'Meltdown', Kode 9 & The Spaceape do what they does best – loss and eeriness– to predictably excellent effect. Meanwhile, dubstep pioneer Mala reinterprets 'Earth A Killya' as the stuff of smacked-out horror, and marrying Green Gartside's Jacko-style vocals to dub bass, as on 'Come and Behold', creates a disarming juxtaposition. Elsewhere, Ras G improves on the formerly thin 'Cool It' by virtue of a frankly torrential production job: half wobble-step, half Anti-Pop Consortium. It's a much needed shot in the arm, if a little frantic and disjointed, where the original was focussed and unsparing.

Presumably because it was Waiting For You's best track, 'Goodbye Girl' is remixed no less than three times, which if nothing else offers an opportunity to compare and contrast the artists' differing approaches. First up, Rob Lowe (not that one) comes in all ghostly and creepy, followed by Kuedo who goes for grandiose, while Detroit's Deep Chord apply some abstract house to only the vaguest memory of the source material. Not only is Lowe victorious, but the dubstep newcomer gets closer than his cohorts to matters at hand. Of course a literal nod to August's riots would only be possible had Sky News shot a burning/deserted Central London in monochrome, before slo mo'ing the footage to a ghoulish 1000-frames per second. But still, there is something of those scenes in Lowe's perturbing hauntology. Again though, it's dissociated stuff, when what was needed was immediacy, presence.

If history tells us anything, the government's response to events in August will not be one of empathy, or indeed mercy, but retribution. After all, we've got the Olympics coming up next year. “Forced removal of the people on the corner” as Fugazi once put it. For those who still believe in corny things like the necessity for protest music (the subject of Dorian Lynsky's excellent 33 Revolutions Per Minute), you too might be disappointed to learn that post-punk's last man standing is away with the fairies. Theoretically, it's a case of the wrong personnel, but for Without You we were promised guns, not butter.