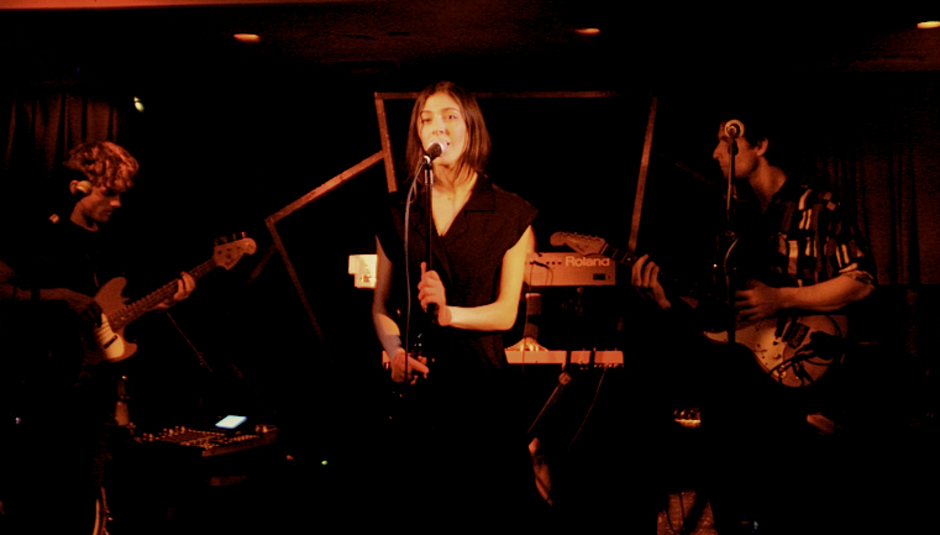 DiS' New York correspondent Amanda Farah popped along to catch the return of Chairlift last week, and here's her report from the intimate show...

The McKittrick Hotel in New York’s Chelsea neighbourhood isn’t designed to keep guests. The hotel was due to open in 1939, but condemned before it could. The first visitors are only now coming through as the McKittrick has been taken over by interactive theatre company Punchdrunk, which is currently using it for a performance of MacBeth carried through from room to room. Its bar, the Manderley, has a very 1920s speakeasy look: What little lighting is provided by its small chandeliers illuminates red walls and red tables.

It’s an entirely apropos setting for Chairlift to premier songs from their (as yet untitled) forthcoming album. The Brooklyn duo, bolstered by a drummer, guitarist, and synth player, gave the sort of subdued performance that befits talking over cocktails. The more downtempo of the songs they performed had a bossa nova quality, very relaxed, very smooth. And that singer Caroline Polachek came out with castanets for the first song didn’t hurt the mood.

On Chairlift’s earlier albums, Polachek’s vocals were played down a bit, skewed towards sounding either ghostly or sweet. But her voice has real power to it, which comes across live and hopefully will come across on the album. And it is a wise choice that she is now carrying all lead vocals.

The immediate impressions this new batch of songs gives is primarily a sense of brightness, in stark contrast to the gloomier, gothier sounds of Chairlift’s earlier albums. They haven’t gone twee, but there is an added shimmer to the guitars and synths. There is also the impression that the songs are tighter than their predecessors; there are still a few meandering, vaguely avant garde outros, but there is a greater sense of structure.

While the jazzier, downtempo approach seems to be the way forward for the band, a few songs, including their latest single, 'Amanaemonesia', have a decided rock bent. This is owed in part to the aforementioned's more rigid structure, but also to the guitars that were allowed to play a more prominent role than is generally heard on their recordings. The sound is as 80s as ever, which, now that the young upstarts are all fetishizing the 90s, will either sound refreshing or double-dated.

'Amanaemonsia' is out on August 15th as a 7" single via Terrible Records followed by their new album which is due this Autumn.