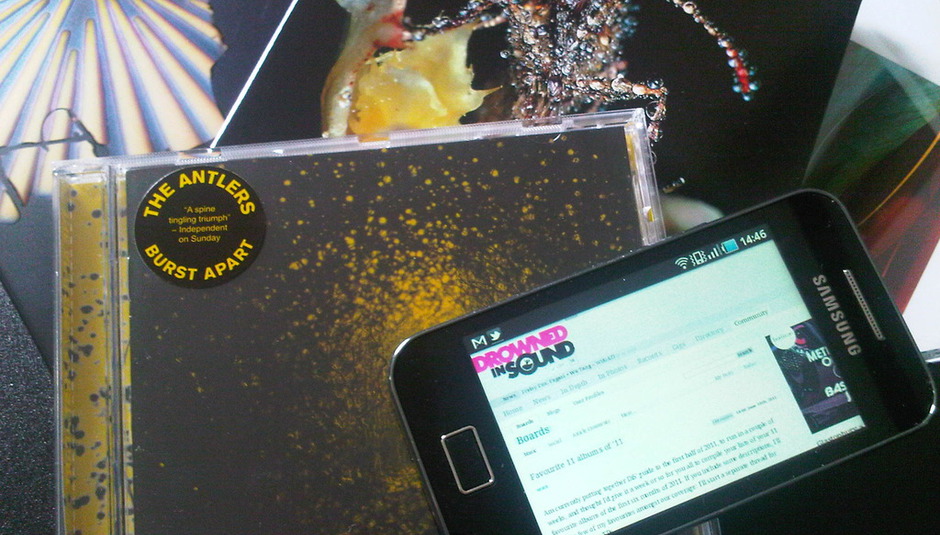 11 albums we (DiS writers and regulars) have been liking so far this year. Plus a text file that you can download to your Kindle or Smartphone to easily read the reviews of these records, and a few interviews, on-the-go...

The start of July sees us tumble into the second half of the year. To mark the half-year, DiS has compiled a list of our 11 favourite albums of the year so far. Whilst six months may seem like an arbitrary time-frame and making a list comes across as some sorta traffic-hungry, link-bait, we won't disagree with you on either count. However, this list is partly for us to take stock, and has also been created with those people in mind who find it hard to keep up with the 25+ reviews and the 1000s of boards posts per day, which are impossible to digest even if you sit on the site all-day, everyday.

There's also an interesting division in the sorts of records which come out in a year. January, for instance, is always chocka with debut albums (one of which sits at number 3 in our list below) from fresh faces who've had their foreheads pressed against the music biz windows, who finally find themselves picking up plaudits and being talked-up amid new year hope. Various acts benefit from carefully planned campaigns coming to fruition, following all the right remixes or playing all the right shows for the seven or so months previous. Hefty marketing spends kick in, with labels attempting to push their new charges up the charts during the fallow period at the start of the year. And it works, with many major label newbies (cynically) riding the new-music-only-exists-in-January hyper-hype machine (O Hai Jessie J!!!).

Then, records dropping from mid-February onwards are usually from acts returning - big guns and cult heroes alike have been slinging albums at us like one of those quiz show games with pound notes and a big fan. There's logic to this overwhelming volume of releases. Some records, recorded the summer previous, have been sat around for a while, as to avoid Christmas and year-end list nonsense - especially as it's hard for record shops to rack a new release after mid-November, due to putting the best of the year in the prime positions at the busiest time for record sales. Then there's the festival season factor, with acts hoping to get as much press as possible when offers and billings are being sorted for the summer. With live earnings now making up the lion share of some acts income, it's wise to time this just right - and putting out an album in November or December, which doesn't pick up year-end plaudits, sort of sees the new year draw a line under the release in some people's minds.

Now that I've got that boring analysis bit out of the way, onto how we picked these records. A few weeks ago I started his thread and encouraged users and staff members alike, to tell us what their favourite eleven records of the year are. I've kept abreast of it and approximated the repeatedly mentioned records both in that thread, and throughout the past six months. I also listened to nearly all the records I hadn't heard before, and tried to make an objective judgement based on some vague idea of what the average DiS reader is into, and then took into account our list of recommended records based on reviews by individuals wot write for DiS and then ordered them in a way that was everso slightly biased by my favourites. It's fair to say, this list will not win any scientific prizes for accuracy but it is as honest a reflection of our writers and regulars as we could hope to make. Hopefully this list offers up a few this'a way pointers toward some records that have come out recently, that are truly special (in my/our humble opinion) and, yeah, this is not gonna be some sort one-size fits all collection, so pop your list with your favourite releases of the year so far, in the comments section below.

And, and, and... in an attempt to make it much easier for you to read our coverage, we've created a text-only document, so that you can easily read the reviews and some related features, all in one go, on-the-go, on your Kindle, iPad or smart-phone (I recommend using instapaper on iPhone/iPad or instafetch if you’re on android). To get the text, you can download it or it open it as a .PDF // gDoc // .Txt // .HTML. Any questions? Ask them below and I'll try to assist. "Bill Wells and Aidan Moffat have created a stunning album that assures us of the death and decay that is to come, but equally, they tell us, as long as we are still around, there is life to be lived, and music like this to be heard." // Read Michael Wheeler's full review

Plus: See our Aidan Moffat day, where he took over the site and wrote various things and made us a mixtape. "For a Low album to be awash with impossible beauty and spellbinding drama is par for the course, but the difference with C’mon is its formidable sense of assurance, rendering it the sound of an exceptional band finally ready to step out of the shadows." // Read Dan Cooper-Gavin's full review

Plus: Visit our Low takeover page, which features an interview with Mr Sparhawk, his track-by-track guide to the album and some acoustic versions of tracks from the album, recorded especially for DiS "With The People’s Key Bright Eyes have pulled off the difficult trick of sculpting a record concerned with weighty, complex themes and made it sound like the breeziest, most effortless thing in the world." // Read James Skinner's full review "It’d be reductive to try and describe a timeless album like Smother as a step up from its two predecessors, or even as a surefire Mercury contender - although it is, on both counts." // Read Krystina Nellis' full review "The missing link between The Knife’s Silent Shout and some lo-fi electronic grime recording... In all honesty, there's nothing else truly like it…" // Read Sean Thomas' full review "Whatever grand plan Tim Hecker may or may not have had in mind here, let’s just say that much of Ravedeath, 1972 will put you in the position of a slack-jawed medieval peasant, floored by hearing the power and beauty of that organ for the first time." // Read Abi Bliss' full review 5) METRONOMY The English Riviera (Because)

"I could mention here the Japan-styled ‘She Wants’ (much has been made of its gorgeous fretless bass but there’s more than a dash of Richard Barbieri in the keyboard textures, too) or the even more minimal ’The Look’, Phoenix eviscerated, wherein Prior appears to have decided that she is allowed to hit the kick drum, but only when absolutely necessary. And using the teeth of a comb as percussion is very Lindsay Buckingham circa Tusk, although that’s as far as I go with the mid-Seventies Mac comparisons The English Riviera has inexplicably drawn. Or I could mention how ‘Corinne’ comes across like The Cars spawning a hybrid of ‘Alec Eiffel’, ‘Computer Love’ and ‘You Wanted A Hit’, or the echoes of fellow English anomalies Orbital that rear their heads on ‘Loving Arm’ and ‘Love Underlined’... Possibly a little early to be wheeling out 'album of the year'-type assertions, but with The English Riviera Joseph Mount has set the bar nice and high." // Read Chris Trout's full review "There is absolutely nothing artificial about Last of the Country Gentlemen; nothing false. It is unflinchingly honest, sharp and unfiltered. And precisely because of this, the album’s emotional gut-punch is all the more painful and disarming to endure. Like listening to Elliot Smith, Ian Curtis or Hank Williams, you are acutely and uncomfortably aware that he means every single word: a nagging sense of guilt, even voyeurism comes upon you for eavesdropping on such personal grief. But the true beauty of the record is defined by its intimacy... A truly magnificent record." // Read David Edward's full review "EMA is riding a wave of such collective goodwill you can almost envisage the end-of-year accolades already. How the former member of a combustible (eventually combusted) noise-folk act – who hails from South Dakota, possesses an unremarkable, if expressive voice and predilection for Danzig, Tool and Guns N’ Roses – has whipped the modern music media into a state of frenzy the likes of which we haven’t seen since… well. At least not this year." // Read James Skinner's full review "Overtones of violence aside, Polly Jean Harvey’s eighth studio album represents an almost total break with the music the original PJ Harvey trio made in the early Nineties. From her subsequent career, the girly, ethereal falsetto of White Chalk has been retained, as have musicians John Parrish, Mick Harvey and producer Flood. And that’s about it. Certainly it’s a case of blues rock out, ‘The Last Post’ in. That centuries old bugle call for British war dead is deployed as a statement of intent three tracks into Let England Shake... despite prevailing wisdom about the state of the music scene today, 2011 can’t be that bad if, just two months in, a reclusive 41-year-old woman gets to release her First World War-based masterpiece on a major label. England’s dancing days might be over, but things could be worse." // Read Andrzej Lukowski's full review

Plus: read our interview with Polly Harvey. "...And then there is ‘Corsicana’. Musically almost desolate, yet with lyrics such as “We should close that window we both left open”, it’s a proper gulp-in-the-throat moment. The song somehow manages to evoke the crazy, loopy emotions of an encounter that probably shouldn’t have happened, but is happening anyway. And whatever’s happening is probably the only thing that makes any sense at all at that point. “We should hold our breaths with mouths together now”- did you ever hear a more evocative, loaded and frankly dangerous way of describing that most intimate of human interactions? ...Silberman’s words are, without exception, painfully, beautifully honest; and so an album that, in anybody else’s hands, would have probably been standard hipster indie fare becomes a shimmering key to anyone’s heart. Burst Apart deserves all the plaudits that can be thrown at it; albums are rarely as unashamedly, gut-wrenchingly, genuinely emotional as this." // Read Krystina Nellis' full review

Plus read: An interview with Antlers + The Antlers track by track guide to Burst Apart

We've compiled all of these albums into one big Spotify playlist, which you can subscribe to by clicking here. Or listen via Youtube using this Playlistify player:

In case you missed this above. Download/open as a .PDF // gDoc // .Txt // .HTML. And then use instapaper on iPhone/iPad or instafetch if you’re on Android to take it with you on the move.

DiScuss: Which were your 11 favourites? Anything on this list you hadn't heard before and you've fallen for? Should Radiohead or Gaga have made the list? Where is Cut Copy, John Maus, Peaking Lights, Bon Iver, Tom Vek, James Blake, Trail of Dead, Kurt Vile, Mogwai, Esben & the Witch, Lykke Li, Adele....?