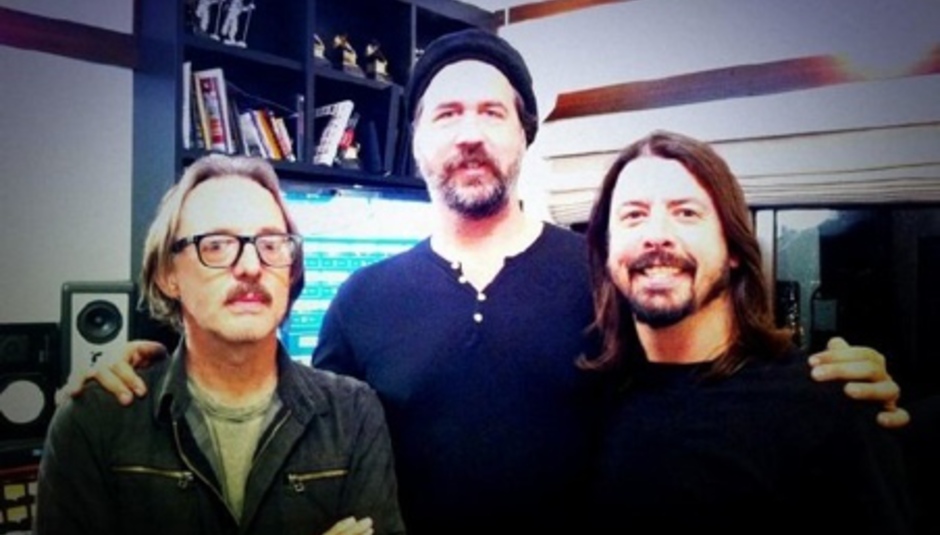 Earlier today everyone's favourite Kiwi DJ Zane Lowe was going on about a BIG ANNOUNCEMENT of some kind about Foo Fighters on Twitter. Logic would assume that it wouldn't be that big an announcement, maybe something about a UK tour. Or similar. But Lowe is a man of his word, and his word is not hyperbole.

It turns out that that Grohl has roped in the big names for the new Foos LP. And when we say big we mean big - including former Nirvana bassist Krist Novoselic (he's 6ft7, did you know?) and Butch Vig who, you may remember, worked on Nevermind. Look, her's a picture of them all togther, via Pitchfork. Here you can read parts of the interview with Zane Lowe.

Here are a few choice quotes from it, though.

"It's weird to put the biggest show we've pretty much ever played on sale when we're halfway done. But I promise you the record will be done. We're seven songs in with five or six more we're gonna do. The last month and a half we've been recording in my garage, totally old school analogue."

"Each song is full on, the whole record is full on. In the 14 songs there's not one acoustic guitar, there's not even one in the house. This whole project has been really cool. I haven't made a record with Butch for 20 years."

He also said there were plans for a film. Errrrrrr. Not sure that's really necessary, Dave.