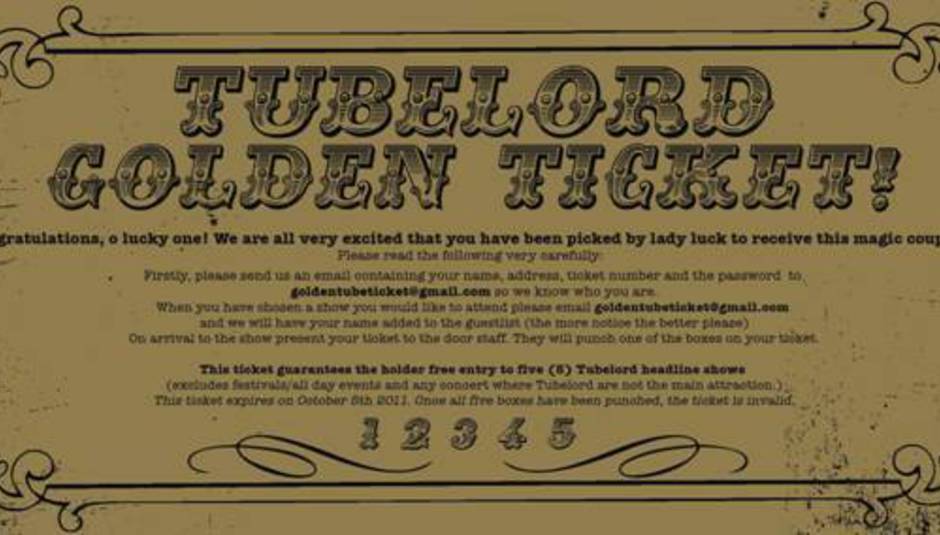 Tubelord do a Willy Wonka, give away golden tickets

People often talk about 'angular' guitars. I'm not entirely sure what that means, but I think Tubelord's nifty-fiddly-intricate six-string work would probably fit that definition pretty well. They released their debut album earlier in the week, entitled Our First American Friends.

To celebrate that very release, they're 'doing a Willy Wonka', of sorts, and are handing out 10 Golden Tickets which they have faithfully stuffed into some of their albums. But what, you ask, will the Golden Ticket get me? Well, lucky potential winner, the golden ticket (pictured below) will get you entry into any Tubelord show, anywhere, in the next little while. If you can read the small print on it then you're a better man or woman than I.

Anyway, if you get one, well done. The band are playing an album launch show with the equally bloody marvellous Copy Haho at The Lexington on October 20. You can buy Our First American Friends WITH a ticket for this show from here for a limited time only. So be quick if you do want to.

& = with This Town Needs Guns