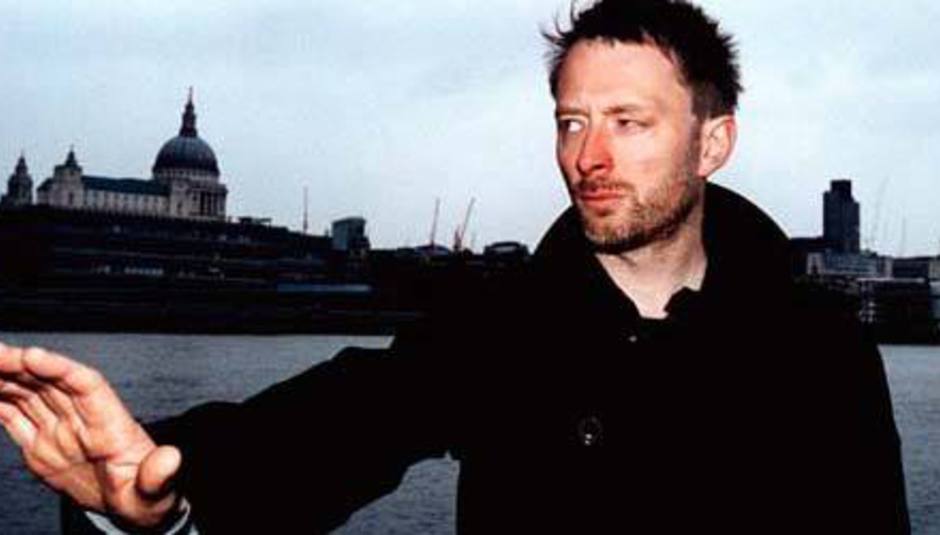 You remember the 'official' video floating around the interweb earlier this week for Thom Yorke's new song, 'The Hollow Earth'? The one which was made up of Banksy imagery, directed by Raymond Salvatore Harmon and reported on many, many news and music websites?

Well, apparently the video for the free-download/single was somewhat less than official, or so says a rather mysterious e-mail, which also claims that Yorke has denied any involvement with the video.

The plot both thickens and deepens at this stage with no actual quotes from Thom, or his "spoke person" (he rides a bike to work, whenever possible, I'm sure), but some rather bold claims about media reporting and journalism in the 21st century, focusing on the news sites who reported the video as 'official'.

The full e-mail, received from contact@betaculture.org reads below (interesting bits in bold, too many typographical mistakes to correct them all. Sick.):

In an act that has been labeled as 'art terrorism' and 'video graffiti' hundreds of major media sources have reported over the past 3 days that a video piece created by Harmon was in fact the 'official' video from Thom Yorke.

With a simple 300 word press release Harmon was able to generate tens of thousands of hits and extensive coverage in major media outlets such as the BBC, Pitchfork, Rolling Stone, Entertainment Weekly, the Guardian, Dose, and a TV spot from the ITN network video feed in as little as 48 hours.

The lack of fact-checking and lax in reporting from major media outlets outlines the weakness of information structures in today's news and media spectrum. Harmon's use of such iconic British personalities as Yorke and graffiti artist Banksy (whose identity is still uncertain) as bait has lead [sic] to much speculation about truth in reporting.

The images used in the video outline Banksy's commentary on such icons as Mickey Mouse and Ronald Mcdonald yet incorporate Banksy's work much the way Banksy himself uses corporate imagery as social commentary.

Harmon describes the piece as a work of his art, both as an experimental video piece and as a commentary on the state of corporate controlled media and news outlets.

A spoke person [sic] for Yorke has asked Youtube to remove the video even though 7 other versions of the Yorke audio for the Hollow Earth are currently available on the Youtube site. Many of the media outlets have altered their reporting to say 'unofficial' by simply adding 'un' to the text without removing or altering it in any other way.

Speculation concerning the potential of hidden subliminal content within the film has surrounded the reasoning behind Yorke's decision to have it pulled from Youtube despite the other videos remaining available.

The Hollow Earth video is still available through most of the reported media outlets and on Harmon's vimeo site:

It's either fully intentional or ironic that the urgent press release by betaculture.org contains so little detail and, as mentioned above, no actual quotes from Yorke or a spokesperson denying anything whatsoever, only claims that the said "spoke person" for Yorke asked YouTube to remove the videos. Why a press representative for Yorke would be asking YouTube to remove the videos is also baffling. Granted, the removed videos now bear the message "This video is no longer available due to a copyright claim by Thom Yorke" but no word on or from the "spoke person".

Of course, the enigmatic betaculture.org are entirely neutral in this affair aren't they? Do they do something with Yorke? Well, no, quite the opposite in fact. Beta:sound (seemingly, part of and linked to on beta:culture) is an internet record label, and who's the director of beta:sound? Raymond Salvatore Harmon, naturally.

But what is Harmon, or whoever wrote the e-mail getting at? Are serious points being made about the standard of journalism - or is he just pushing for more publicity? Is the reporting of an 'unofficial' video as 'official' really so much of a bad thing? It seems The Quietus reporting of the whole affair was pretty close to the mark first time round.

So in essence, he either wants you to watch his UNOFFICIAL Thom Yorke video for 'The Hollow Earth' or is just pissed off at Thom Yorke for wanting to get rid. Logical? Perhaps. Or, as one particularly astute blogger put it, "it's a TWAT TRAP."

Will we hear more about this in the next few days? Maybe, maybe not. Of course, you can view the offending video through many portals, so do that if you want. It's quite good actually.

DiScuss:So, is the whole thing a publicity stunt by Harmon? Or maybe even Yorke, though the latter would perhaps be pushing it a bit far given the removal of videos? Are the points about journalism really spot-on? Have you seen the video? Is this news?