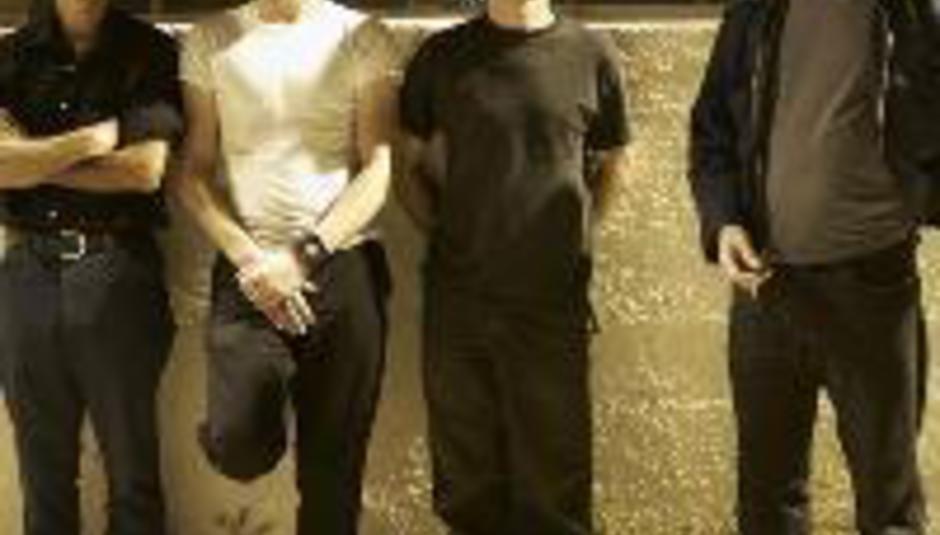 Enablers… I’m not sure I’ve words enough left in me to convince you that they’re worth your pocket change for an evening’s entertainment, having previously covered them live, reviewed their debut album and sat with fifty per cent of them for a DiScover feature. I’ve run dry, of consonants and nouns; please follow those emboldened links to improve your record collection considerably. For fans of: good music, d’uh.

Live, though, is where Enablers come into their own – watching vocalist Pete Simonelli in person – lithe, writhing through the front few rows, arched and bent, howling like the wolf – is like little else. Few frontmen can hold a candle to the man’s charisma, to his ownership of the stage and your attentions. Look away and he’ll have sauntered up beside you in a heartbeat – a whisper in the ear and a glint of menace in at least one of those eyes squinting under bright lights.

The band call into London’s Monto Water Rats for a special show brought to you by DiS in association with Mammoth Booking (Plan B, it should be noted, are tour sponsors for the band’s entire jaunt). March 14 is the date; tickets can be yours from HERE. I’d recommend the purchase, to say the least. But, if you’d rather test your luck and try to win tickets, plus additional swag, do please read on.

The band’s Kevin Thomson has posed the following questions; answer by e-mailing MIKE DOT DIVER AT DROWNEDINSOUND DOT COM with the subject line ‘ENABLERS COMP 1’ or ‘ENABLERS COMP 2’. Winners are, quite literally, the first to get their entries in, assuming they’re accurate of course.

Competition 1
The first person to correctly identify Pete Simonelli's hometown gets on the door, plus one, at The Water Rats and receives a limited-edition Lancashire and Somerset Enablers/Red Panda split 7"

Competition 2
The first person to correctly name the first LPs that Kevin Thomson, (band members) Joe Byrnes and Joe Goldring appeared on gets on the door, plus one, at The Water Rats and the ultra-limited 12" single with artwork by Chris Johanson.

That second one’s a toughie, but what’s Wikipedia for eh?

Go see! Before that... videos!