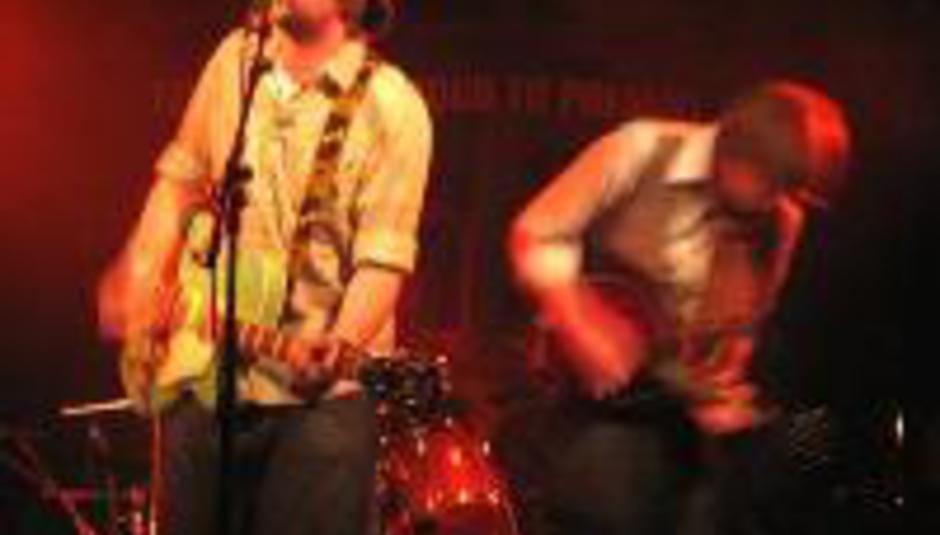 Yeah, yeah – I know we’re not even done with 2007 just yet. But such is the excitement for show booking at the DiSopolis that we’ve gone and confirmed our first four DiScover Club bills for 2008. That’s January to April: sewn up.

Personally, I’m mega excited about all four of these shows, but to have confirmed the likes of Broken Records (pictured), Johnny Foreigner, Elle S’appelle and Beestung Lips, all of whom could be making serious waves in 2008, is super super. Actually, all of these bands are brilliant, truth, so don’t miss a single one of our first four DiScover Clubs of 2008…

Johnny Foreigner
Birmingham three-piece Johnny Foreigner saw their EP Arcs Across The City earn a pretty bloody rare 10/10 on this very website, and to say they ooze potential is a massive understatement. They gush it, if such a thing were possible, physically, for humans. Style-wise, they draw from the alt-rock likes of Owls and Q And Not U and mix in the immediacy of Seafood and Bloc Party. Currently working on their debut album in New York, DiS isn’t alone in reckoning JF could be A Big Deal in 2008.
MySpace

Sailors
Hailing from Newcastle and Leeds, this four-piece channel the controlled aggression of Ten Grand and muddle their riffs around in a wonderful Fall-recalling manner. With a self-titled seven-inch EP out now on Gringo, home to Lords and Soeza among many other domestic greats, Sailors are one of the best intelligently noisy outfits doing the rounds this side of the Atlantic right now – for fans of Charlottefield and Fugazi as well as the aforementioned touchstones.
MySpace

Yeborobo
Madcap indie-rock loons with big arms – you’ll see – and jangling meanderings that have to be seen to be actually believed. Really – the less said here the better as actions do speak louder than words in the case of Yeborobo; just remember to duck. Details, of you must, at Wiki.
MySpace

Munch Munch
Bristol-spawned four-piece Munch Munch recently received our Single of the Week thumbs-up for their ‘Wedding’ seven-inch on Tomlab (Casiotone For The Painfully Alone, Deerhoof), and their live shows carry a reputation whispered down to London way on fairy wings, fairy wings fluttering a tune of good, mate, well good. Disjointed alt-pop has rarely sounded so singularly brilliant as it does at this outfit’s MySpace; check them out and get on down for tailfeather shaking fun.
MySpace

One More Grain
London-based but definitely northern-tinged, One More Grain’s wobble-pop rhythms and insistent percussion are topped by wonderfully weird narratives from one Daniel Patrick Quinn. Their second album, Isle Of Grain, is out in January 2008. Comparisons? Erm… post-punk brass-kissed Kraut-rocking oddities past. Were there any? Just listen, eh…
MySpace

Beestung Lips
From Birmingham and signed to the label of Supersonic-organising types Capsule, Beestung Lips’ punk-rock is messy, fiery, passionate, real. Influenced in equal parts by literature and music, they’re a live force to be reckoned with, recalling Hot Snakes, The Jesus Lizard and The Birthday Party. Anyone wanting a Gallows-ish band with more bite: step right up. Their Songs To And From An Iron Gut EP is out now and received a 9/10 review on DiS. I CAN’T WAIT, really…
MySpace

Lakes
Canterbury four-piece Lakes recently released a split 10” with Brighton’s Zettasaur, and it was very, very good. With a self-titled EP also out – through the same label, Signature Tune – and a tip from punkers of 2007 Gallows on their CV, the next twelve months should prove very interesting for Lakes. They’ve the potential to become crossover material, and with a DIY spirit on their side it’s likely Keeping Things Real in the face of any hype’s a given.
MySpace

Who Owns Death TV
Featuring former members of Million Dead and Cars As Weapons, this four-piece are steadily building a live following, with support slots forthcoming with Future Of The Left and Gay For Johnny Depp. Melodious yet full of tension, their MySpace material forms a fine foundation for progression – expect a flurry of interest when the wider industry awakens.
MySpace

Broken Records
I’m not sure how, but Broken Records have infected these thoughts of mine something crazy these past few weeks – I must be playing their MySpace tracks once every couple of days, and the likes of ‘If The News Makes You Sad’ and ‘A Good Reason’ have infiltrated my dreams, even, Seriously: I’m waking up singing these songs. Think Arcade Fire, Cursive, Twilight Sad, The Killers (really!), Bruce Springsteen, Bright Eyes… comparisons come quickly, yet there’s something about Broken Records that really strikes a chord; clearly they’ve massive amounts of potential, and if they’re not playing arenas (ish) in a few years’ time something’s wrong with this industry.
MySpace

Vessels
Currently away in the States recording their debut album, Leeds-based Vessels have played our DiScover Club before, with Lovvers, in the summer of 2007. We liked them so much – as did a huge crowd – that we couldn’t not ask them back, especially in light of the brilliance of their latest single, ‘Two Words And A Gesture’, which was released last week through Cuckundoo. If you’re of the opinion that post-rock has become a predictable genre due a death, prick up those ears and bend them the way of the below link.
MySpace

The Monroe Transfer
London collective The Monroe Transfer tread the lines between classical music, post-rock, exploratory instrumentals and musique concrete quite expertly, and have recently soundtracked a feature film and worked with an animator to create visuals for their 20-minute piece i dreamt i was a hammer & everything was glass. Once seen unlikely to be forgotten, the band’s live sets are truly captivating.
MySpace

Don’t forget our DiScover Christmas Party, too! Errors, Rolo Tomassi and Tired Irie, FOR FREE, at Notting Hill Arts Club, December 15. All DiScover Club shows are held at the Arts Club, in London, and all are free-entry events opening at 4pm. Entry is restricted to over-18s only. All DiScover Club shows at the Notting Hill Arts Club are run in conjunction with RoTa and Rough Trade Shops. For more details on these shows, click HERE. Look forward to seeing you all for some truly brilliant new bands…