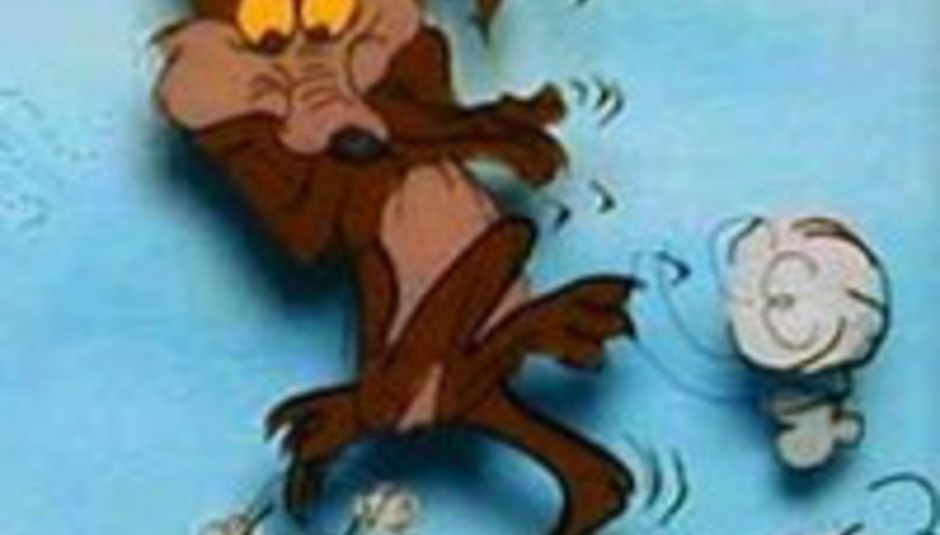 Chart Round-Up: brought to you by ACME

It’s gone eerily quiet in the singles chart this week; it is, we fear, the calm before the almighty shit-storm that is the rush for Christmas number one. Leona Lewis still clings to her coveted top spot unawares, like Wile E Coyote pedalling furiously through the air after he’s run out of cliff, seconds before an unexpected date with the canyon floor. T2 feat Aysha’s still at two, and Girls Aloud are up six places to number three with ‘Call The Shots’, and Editors are sort-of new entries at 26 following the physical release of ‘The Racing Rats’.

Also riding high are a brace of connoisseurs’ choice Xmas singles from yesteryear - ‘Fairytale Of New York’ by The Pogues at 33, and ‘All I Want For Christmas’, possibly Mariah Carey’s strongest claim to owning a soul, at 23. And if it’s a spot of power balladeering you’re after to put you in the mood for shoving your hand up a turkey’s arse, look no further than Christina Aguilera’s ‘Hurt’, up a whopping 88 places from 127 to 39, if my dodgy maths serves me well. Meanwhile, lad rock bum-sniffers The Twang take time out from imagining Lucy Pinder’s exposed nipples to nick off with the Axel F bass line at 63 with ‘Push The Ghosts’.

Last night I got sat next to the most annoying man in the world on a train, he was phoning his girlfriend who was stood inches away from him on the platform while I sat between them grazing on a Burger King. He cooed and simpered in a ridiculous baby voice that made me want to throw up my bacon double-cheese, and when we pulled out of the station he produced an enormously-fonted copy of Chris Moyles’ The Difficult Second Book, which heralded the beginning of a two-and-a-half hour sniffing fest that saw him seemingly snort the entire liquefying content of his brains through his sinuses and into his gargling throat. He sounded like a pig in reverse.

The album charts are a lot like that man; evil, and inducing profound fears for the future of the human race. About the only things worth mentioning are the appearances of Shayne Ward, who is Breathless at number 2 – but not as breathless as we’d like, etc etc – and Kylie Minogue, whose X this week marks the number 4 spot.