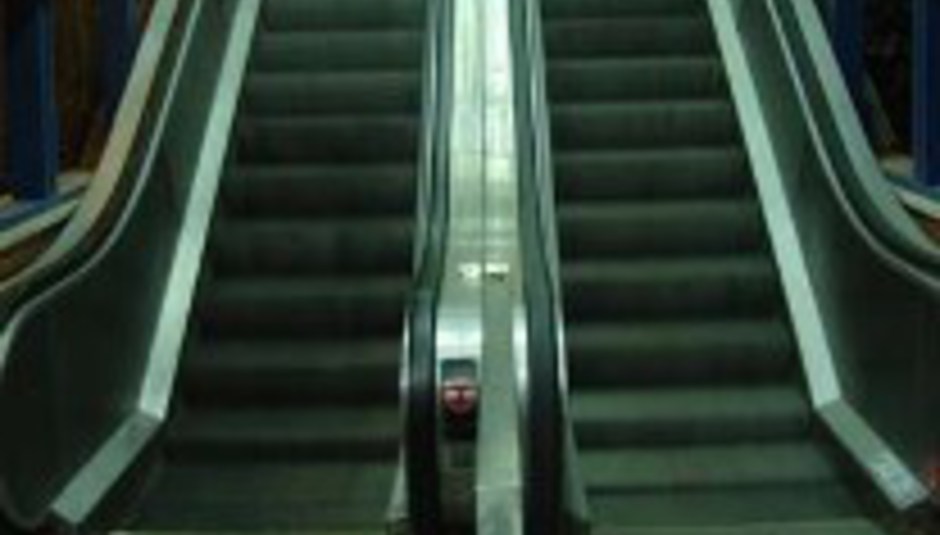 Chart round-up: the fag-ends of futility

This week's charts remind me of a cigarette butt dancing at the bottom of an escalator; I look upon it, and am filled with a sense of the futility of all existence, but, you know, it's poetic and that.

I know everyone hates it and everything, but am I the only one who doesn’t really mind the new Bloc Party single? I mean, heard in context of the rest of these weight-of-the-world, teeth-gnashing tune dodgers’ turgid careers, robbing off with the odd Donna Summers synth line isn’t necessarily a bad thing. So we’ll call 'Flux''s entry at number eight ‘thoroughly deserved’.

We’re a bit confused as to Runrig’s presence in the top ten (number nine, FYI), with 'Loch Lomond' - misplaced fitba’-inspired bout of patriotism or charity ‘thing’? T2 Ft Jodie Aysha take their pleasingly lo-fi garage ditty, ‘Heartbroken’, to number 14, while Nickelback frontman Chad Kroeger shrugs off failed attempts at becoming a wise man and a poor man stealin’ to play the old-fashioned ‘Rockstar’ at 22. Honestly, it’s enough to make you rue the day they invented the amplifier – Kroeger’s eloquent vision of the rock dream basically centres around the stated wish that somebody might bestow him with the front door key to Hugh Hefner’s mansion. What do Hugh’s bunny-eared minions even do inside the cloistered confines of that house, anyway? I think perhaps they spend most of the day ‘cavorting’.

Pigeon Detectives' ‘I Found Out’ is a bit vanilla, if you get me, but at least has the twin benefit of being conveyed with real enthusiasm and played straight, and is therefore both a wet fish in the poker face of a certain aforementioned indie quartet, and a slap in the smirking chops of slack-vowelled champions of dubious irony The Wombats, whose Joy Division song falls 20 places to 50.

For an uncharacteristically new-looking album chart there’s still a fusty old whiff about it that’s hard to finger exactly. And I’m not just talking about Craig David waving his stinky old man parts around at 18 with Trust Me, either. Nope, think more along the lines of Spice Girls, Led Zeppelin, Andrea Bocelli, David Gray, Beautiful South and The Rolling Stones, all taking money for old rope with assorted Best-Ofs, Very Best-Ofs and Ultimate Best-Ofs you’d obviously be best off neglecting to purchase. Arf arf ETC.

Even The Killers are offering up their factory floor sweepings with the mechanically-reconstructed muck that is B-sides album Sawdust. Haven’t heard any of it, mind. There’s another sordid theme running through this week’s motley bunch of long-distance poperators, too, a theme we’ll tentatively dub the ‘douchebags calling their albums really pretentious names’ theme. Fist we have Sir Cliff Richard ambitiously documenting every known facet of the human institution known as love at 13 with Love - The Album. Then there’s Robert Plant looking a bit foolish in his attempts at Raising Sand at 15, and Hoosiers are still staking their dubious claim to possessing The Trick To Life, down 14 places to 21.

Last but not least are a brace of divas young and old, Leona Lewis scoring a number one with her debut Spirit, and grand old dame of warbledom Celine Dion returning to the fray with Taking Chances at 5.