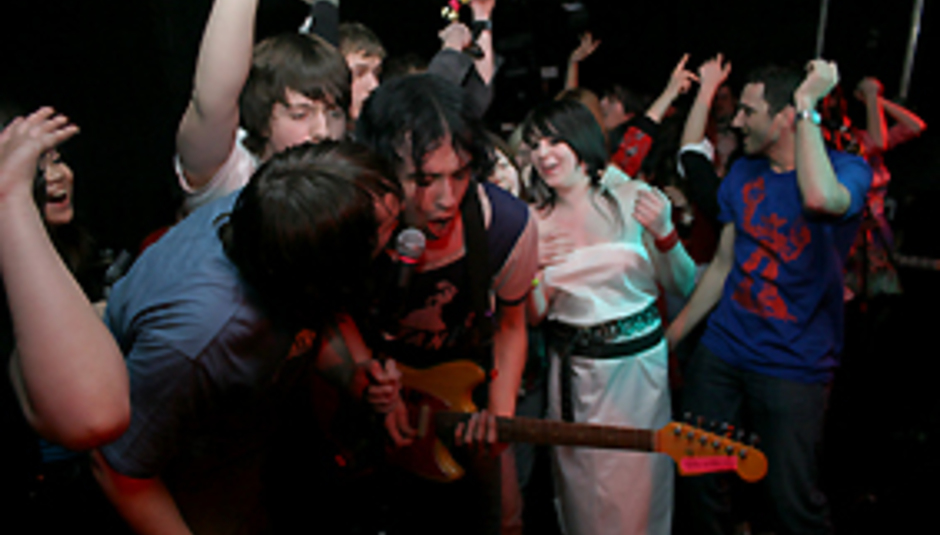 Since last week, DiS has had a rethink and we'll give the top 75 another go to see how it's moving along. We were depressed last week, as the last bastion of our childhood fell away, leaving us to peer into our adult future with sad eyes and tassles on our nipples. Or something. So this is how it goes..

Tony Christie holds onto no.1 like a butcher's dog and a string of rosemary and parmesan sausages, meaning that no.2 goes to... oh, Elvis. The charts start properly at three with Bodyrockers doing 'I Like The Way', but the first sign of 'indie' would be Nine Inch Nails at no.8 with 'The Hand That Feeds'. That hand being Island Records in the UK, and very happy they are too. Virgin are probably chuffed as well, as they rinse the last vestiges of anything from the Ceasars' 'Jerk It Out', which whistles in at no.9. That's the third time it's been released folks.

Hard Fi and Ja Rule are the only other top twenty entries, with the 'Fi taking no.15 with 'Tied Up Too Tight'. Still not sure about those Staines monkeys, but who are we to argue with the crazy record buying public? Speaking of monkeys, Gorillaz released another batch of limited vinyl to accompany the download meaning they cheekily play the chart game and hang in at no.21 - actually moving up a place. When they finally do get round to releasing the single 'proper', they'll look proper impressive in a chart-climbing-like-they-used-to-in-the-old-days way.

A pair of blimeys at no.22 and 24, with Editors doing 'Munich' and Rakes pushing 'Retreat' two places beneath. Wow, good going, indie chums. Just as coolasyoulike are The Cribs at no.27 with 'Hey Scenester!' Guys, it appears you are the scene now... good work. And HA! as the Levellers go into no.38 with 'Make You Happy'. We can only assume that the cheeky crusties fully activated their record buying, download loving fans. Well done. Make the system work for you etc etc.

Faithless do 'Insomnia' at no.48, though we had no problems sleeping... and that's it in the top 75... the rest of it is cluttered with crap like Linkin Park/Jay Z, Athlete, Green Day, the Chemical Brothers and Morrissey. Alright, it's not all crap, but these songs have been out for how long? Tut.

In the album charts, the first new entry is Nirvana at no.28.

You heard me right. Was 'Nevermind' on sale at HMV? Next new entry is Jeff Buckley at no.42 with 'Grace'. Aren't these people dead?