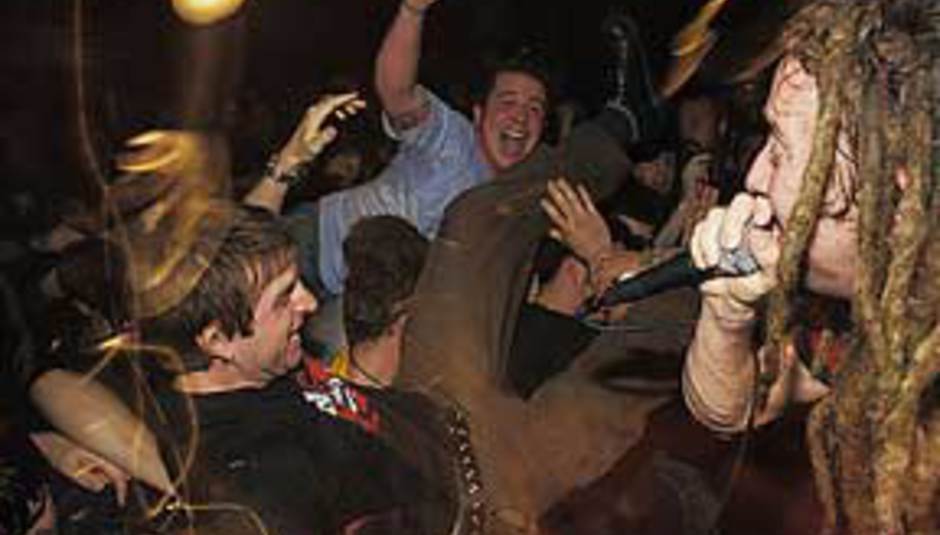 by Mike Diver June 10th, 2004
DiS attended Europe's premier skate punk festival, Deconstruction!, at its final leg at London's Brixton Academy. We darted backstage to talk punk and 'boarding with three of the stars of the show...

How important is Deconstruction in the contemporary punk scene? It serves purposes – it wouldn’t be responsible to have songs and ideas that we do and keep them in a small, elitist community. It’s important to get your music to the kids who are just getting into punk, so they can cut through the surface tissues and get into the heart of it – each band is a gateway to another.

How good has this line up been over the course of the tour?
I think all the bands are stunning, and generous, good people. Nobody has bratty attitudes. We’ve formed a special bond with The Slackers, and The Movement are incredible. The Beatsteaks too have a really great vibe. We have loved this.

Why do punk rock and skateboarding go so well together?
I think that even though it’s been rendered into something that’s very cartoon and filled with artifice, there’s a soul in skateboarding, much like there is in punk. If you strip away the layers of corruption and spin, you find something highly anarchistic and individualistic, born out of making something beautiful out of industrial ruin. It was the sport of the disenfranchised, forgotten youth, and punk was their music.

How important is Deconstruction in the contemporary punk scene?
For us to get out and play with bands playing a lot of different styles is fun – we get pigeonholed ‘ska ghetto’. I mean, we’re opening for Anti-Flag! We’re like ska missionaries, but the punk and ska scene is very much part of English pop music history – I saw people cheering when we came onstage.

How good has this line up been over the course of the tour?
There’s a lot of energy, and everybody on this tour really has their shit together – there’s not a slouch band on this tour.

Why do punk rock and skateboarding go so well together?
I don’t know. I guess they’re (Deconstruction) trying to do a European version of The Warped Tour.

How important is Deconstruction in the contemporary punk scene?
I think it’s important and helps keep punk music alive. Plus, we’ve won new people over on this tour. I’m a little spoiled though because we just played the Rock AM Ring last night and I’m still buzzing.

How good has this line up been over the course of the tour?
If I’m totally honest, I think it was more entertaining two years ago, but maybe that’s because I’ve been in the music scene longer now. I would have liked to see The Descendants on this tour, a really influential band. It’s important that bands like Pennywise are here, but, without being rude, musically I’m getting away from it – we don’t fit in with this type of punk, really. It’s all so limited. The Slackers have stood out though; they’re really entertaining.

Why do punk rock and skateboarding go so well together?
It’s very much together in America, but I’m not sure how you can successfully transport something like that to Europe. The Warped Tour wouldn’t work in Europe because it is such an American thing – Europeans want their own stuff.