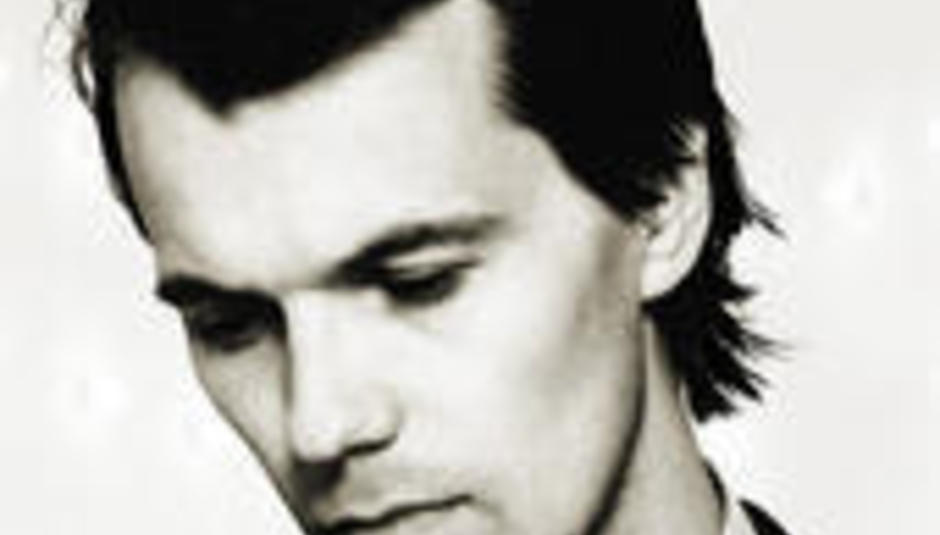 John Erik Kaada lopes into a Crouch End local, conveniently all of ten minutes’ walk from his interviewer’s ground-floor flat; his hair cropped short, a neat beard about his mouth and thick-rimmed glasses perched atop his nose, the Norwegian musician is as physically similar to his current crop of promo pictures as the guy meeting him is, i.e. not at all. He orders a Staropramen and sinks into a particularly comfortable sofa.

“I’m here on holiday, really,” he says; his attire – just-below-the-knee shorts and a collared t-shirt – seems to suggest as much, as does his in-tow girlfriend, who smiles politely even though her boyfriend’s temporary drinking companion forgets her name as soon as he’s told it. “But it’s nice to stop by Southern and pick up some records, and I’m doing a couple of interviews, too.”

This being one of them; the next day will see John – known simply as Kaada to Ipecac aficionados and Norwegian movie-goers alike – speak to a rock monthly in the slightly less salubrious surroundings of The Angel public house on St Giles High Street. Now, though, he’s as content with the setting as he is his label: Ipecac, run of course by Mike Patton (and distributed by Southern in the UK, the headquarters of which is all of twenty minutes’ walk from where we sit), allow him the flexibility to create whatever music he wishes, and the most recent product of this relationship is Music For Moviebikers, Kaada’s third long-player following his Thank You For Giving Me Your Valuable Time debut and the collaboration with Patton, Romances.

But today’s talk is not of the past – those records can be discovered after this year’s release, which emerges worldwide on July 11 but not in the UK until late August. Music For Moviebikers is a truly absorbing, consuming record – sixty minutes of score for some wonderful fantasy fairytale of a film, some imaginary celluloid experience that no filmmaker could credibly capture. It draws, quite obviously, upon Kaada’s ‘day job’ – he writes music not only for films (ten so far) but also international television advertisements (“I just did one for Africa,” he says. “I’m very lucky – I’m the one they call when they want something different.”) – but possesses an affecting emotional element usually absent in adhere-to-the-script movie scores. Primarily instrumental, the thirteen perfectly coherent songs were recorded by a twenty-two-piece orchestra in an Oslo mausoleum. Eerie yet enchanting, like a Danny Elfman greatest hits collection with a cool Nordic twist, Music For Moviebikers might be the most delightful, delicate but powerfully moving, absolutely left-of-centre release to hit record store shelves all year.

“I haven’t figured that out yet,” Kaada laughs; he’s just been asked how he expects to tour a record performed by twenty-two people. Offers have been plentiful – Germany, Japan, the US – but money’s not exactly on the musicians’ side. “You’d have to fly over, and book a whole hotel, and then we’d need the engineer, and the sound man. So I’m thinking about maybe taking six people on tour – we could do that. I’m really tired of cancelling gigs, and saying no to gigs, because we can’t afford to go with a full band. So six people would be okay – but everyone would want single rooms!”

He cackles, wickedly, like a warlock that might inhabit the imaginary cinematic landscape the mind conjures while listening to Music For Moviebikers. I shoot a glance, swiftly, the way of the girlfriend, but she’s engaged in conversation with the accompanying PR. Perhaps I’ve got hold of the wrong end of this stick, anyway: Kaada isn’t rock and roll in a rock and roll respect; he’s rock and roll in the traditional sense – he breaks boundaries and takes risks with his music, but isn’t some groupie-banging ego monster, nor is he an attitude first, material later sort.

He continues, and qualifies his single-room statement: “They’re all professional musicians, so they don’t want to stay in a YMCA! There would be a lot of cheating – now we’re discussing the use of samples in a live performance – but the first album was categorised as an electronica album. The thing with that album was, though, that we tried to play like it was an electronica album, and that’s what we’ve done live, too. But I can’t think about what I have done.”

Kaada has a point: each record has been so different from its preceding release, debut aside obviously, that there’s no suggestion of an attempt to maintain a particular approach or style. He confesses that he’s served his time in the studio, and has practically lived within a 22-inch monitor for months on end, but the organic – his word – approach to Music For Moviebikers has resulted in an obvious excitement: it’s there, all over his face, as clear as the beer he accidentally splashes onto his shirt.

“I needed – I wanted – to prove that you can do things in an organic way,” he says. “You know, I wrote everything down in notes, and I haven’t done that for many, many years. I’m actually a pianist, so I’m used to reading notes, but I haven’t really worked in that way because I’ve been used to computers.

“We went to this church, this mausoleum, in Oslo, but the thing I wasn’t prepared for was that we weren’t allowed to have lighting rigs in there: there were old paintings in there, and they would be damaged. So we had notes, but couldn’t read them! Everyone was working in the dark. We came out of that dark room, where we’d spent every day for about two weeks, and…”

…And then it strikes you that this wonderfully rich record – one of textures so beauteous that you daren’t listen to them too loudly, of layered sounds so intertwined that an attempt to hear an individual noise would unravel the piece entirely – was recorded, for the most part, in just two weeks. Kaada immediately admits there were numerous overdubs added later, and that drums were recorded before the mausoleum sessions (“Most of the drums were later removed,” he says, apologetically; the drummer was, understandably, initially annoyed), but such a work rate is worthy of unabashed celebration, especially when the end product sounds like many months’ work.

---
"I actually feel comfortable when I’m doing stuff that I’m not used to.
Everything I’ve done before, if there’s been a mistake, I can fix it in the mix; this time I didn’t."
---

“I wanted everything to be human, not done by a machine,” he continues. “I’ve been fiddling with computers for ten years, so I wanted to do this another way. That was one of the motivations behind the whole project: I wanted to do everything in a way that I’m not too comfortable with. But I actually feel comfortable when I’m doing stuff that I’m not used to. Everything I’ve done before, if there’s been a mistake, I can fix it in the mix; this time I didn’t. Everyone was so focused. I really wanted to take the music out of my own studio, and I’m very happy with it. I am really proud of this album.

“Everyone had been asking me, ‘Why don’t you release a soundtrack album?’, because some of these movies have been seen by a lot of people in Norway. But the time has never been right. In movies, you have to make music that matches the director’s vision – if a family is eating breakfast, you have to make music for that; if a helicopter is sweeping over a mountain, you have to make music for that – and I can’t see those things come together on a CD. I don’t like that many soundtracks, on CD. I don’t buy them because they’re out of context, and often they are full of many different styles – they rarely flow. So I wanted to make a ‘film music’ CD, using the experiences I’ve had, because I’ve never brought these two worlds together – the going around with a rock band and doing all these things for films with an orchestra. This music isn’t too happy or too sad, but it flows and has interesting instrumentation.”

A studied student of sound, Kaada expresses a sadness at contemporary (popular) musicians’ inability to explore their own trade in a little more depth: “There are so many bands that don’t seem interested in exploring – they never wonder what would happen if they combined this guitar with that timpani. Perhaps they are too focused on success, or getting onto the radio. I’m lucky that I don’t have that kind of focus.”

When the subject of compromise is raised, Kaada admits that if high-profile film offers came his way as a result of Music For Moviebikers – it’s truly difficult to listen to it without daydreaming on a widescreen scale – he’d consider his position and probably act affirmatively. He still sees the commissioned pieces as his job, and his own releases as a hobby; that said, Music For Moviebikers could mutate, so easily, into an album of Play proportions. There are few tracks here that couldn’t be plucked by some open-eared director and well utilised for dramatic/atmospheric purposes; like Moby’s eventual breakthrough, it could be a slow-burning release, one that picks up fans through synergy rather than purple-prosed critical summarisations.

Pints emptied, only one question remains: does Kaada, considering the grand, orchestral nature of his new release, see himself as a musician first, or a composer?

“My job is really split – to be a musician, you have to relate to so many different people, doing things that are so far away from just sitting at a piano. But that’s what I like about my job – there’s a lot of variation. Everything goes hand in hand, and the attention I get from releasing albums gets me more film music. Everything goes together, and I’m really thrilled. I couldn’t be just a composer – it’s very isolated work, and eventually you need to get out! Trust me. You need all aspects.”

And the tape clicks off, is rewound and packed away; we, though, stay where we are (okay, we move to another table, in the smoking section). Kaada and I, and girlfriend and PR, stay for another, talk football and fishing, remote islands (Kaada was brought up on an island where only 300-or-so houses stand) and natural history – the man not only makes interesting music, but is himself a multi-faceted character, modest yet quietly confident of his ability. Perhaps it’s time that so-called movie music, often crafted by anonymous figures, found itself a face? After all, there’s a readymade one sat right before me.

Kaada's MySpace site, where you can hear tracks from his new album, is here. Music For Moviebikers is released in the UK on August 28.