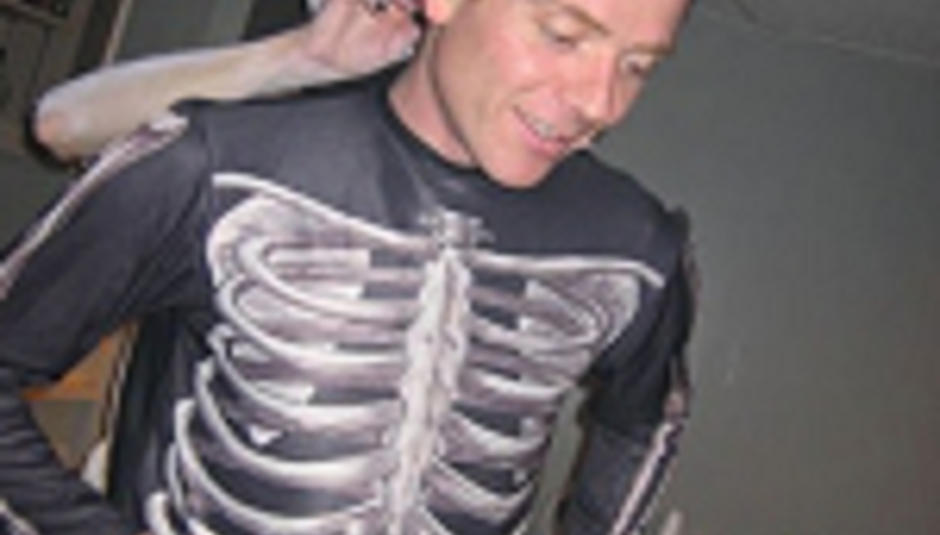 by Nadine McBay May 26th, 2004
Belle & Sebastian’s Stuart Murdoch talks to Nadine McBay about School’s Out, funktastic new single ‘Your Cover’s Blown’ and his transition from shadowy indie svengali to self-proclaimed ‘media ho’.

(DiS): What was the idea behind School’s Out?

(SM): “When you’re in quite a successful band you’re in quite a privileged position to get things going. Although it might not have been perceived this way, that’s been the idea of the group from the very start – to make it fun for the people for the people who come and see us. A year after we formed we tried to do an outdoor with V-Twin and Snow Patrol, but we got rained off. So we wanted to have another go and we’d wanted to do something with the West End Festival for a while. It’s a good feeling to do something where everyone is welcome. We asked everybody who’s on the bill and they were kind enough to offer themselves for free. The Trashcan Sinatras was a name that kept coming up and I thought they would be ideal for a sunny day in the park. This gig has a lot in common with getting up and playing in the Halt Bar on a Saturday afternoon as it’ll be a catch-all with people drifting in. I used to go and see free concerts at the bandstand in Kelvingrove Park which has been left to run down. It’s a floral wilderness now but no matter who was playing I’d have a good time.”

(DiS): The new single (‘Books’ out 21st June) is on CD and DVD, which is unlike the older EPs which were independent from the LPs. Are you going down the multi-format route?

(SM): “This is the third single that we’ve used different formats and at first we were a bit suspicious, but then we thought about all the people who hadn’t seen our videos before. You feel now that when you’re making a video, you’re making it for the DVD. We try to put as much stuff as we can on the CD and if we can put extra stuff on, we’ll do it. We only really wanted to do a couple of singles from the LP as three singles from an LP is pushing it both from a fan’s and my point of view. We’d lined up a new song called ’Your Cover’s Blown to make as part of an EP. We let the record company hear a rough version and said: ‘You’ll like it when it’s finished’. They wanted another single because ‘Cuckoo’ had down well and they wanted ‘Wrapped Up In Books’. When we finished ‘Your Cover’s Blown’ they said: ‘We love it – it should be the A-side. I was like: ‘I could’ve told you that months ago!’ They’re a good lot, but like any record company, you’ve got to go through a formal process of actually convincing them with every release. It’s recorded live. We played that song twenty times on the day we recorded it and each time I was getting more and more into it. It’s about the day in the life of this office worker and there’s all sort of sexual tension going on. So it’s a double A-side, but for us the A-side is ‘Your Cover’s Blown’ whereas Radio 2 will play ‘Wrapped Up In Books’.”

(DiS): Will you do that more in the future – release singles independent from LPs?

(SM): “It’s all part of a process of trying to sell some records. We were always frustrated that time after time our singles got ignored and didn’t get played on the radio up until ‘I’m A Cuckoo’– we thought they were alright. If Madness or the Specials had been indie snobs like us, I’d have never had heard of them. We’ve still made quite an effort with the singles from the LP”.

(DiS): Do you think that’s how some people have perceived B&S? ‘Indie-snobs’?

(SM): “It’s all about different perceptions. We certainly didn’t set out to be like that. It wasn’t a ruse, it just felt right. You are trying to create a world. The record is everything – you don’t need anything else.”

(DiS): When did it feel that B&S became a ‘proper band’ and not just the outgrowth of the college project?

(SM): “We only formed to do the first record, so we never had the feeling that other band’s had – of wanting to take over the world. So in a sense, we just stumbled into it and we became a band through our LPs. I think we only made a conscious effort a couple of years ago. It wasn’t until we finished four LPs and then we thought we could take a break or carry on. And we wanted to carry on. It was around about that time that I gave up my job.”

(DiS): A lot of people thought ‘Fold Your Hands’ and ‘Storytelling’ were weaker than previous LPs as there wasn’t enough of you on them! Are you more comfortable with B&S being seen as ‘your’ group?

(SM): “It’s my group, but it’s Stevie’s group and the other’s group too. I feel really happy with the group in the sense that people can do what they want to do – if someone’s got a song, no one is scared to let us know. The leadership is really just about guiding an idea through the process, whether it’s for a song, or a video. It might just happen (tentatively) that I might get more of the ideas”.

(DiS): What do you think of ‘Storytelling’ in retrospect? Were you angry that a lot of the tracks didn’t appear on the film?

(SM): “I wasn’t angry. You knew what the deal was, but I wouldn’t do it again. I’d have to go in with a director at a much earlier stage. But saying that, I was really happy the way the band manoeuvred so quickly. It’s quite a democratic LP as people who don’t sing got to explore their music and ideas. For a lot of that LP I sat behind a desk reading a really heavy book on the Beatles while they were playing and said intermittently: ‘that’s really good!’. I haven’t ruled out doing another soundtrack, but we’ll leave it for a while.”

(DiS): The band has obviously changed since then. ‘Dear Catastrophe Waitress is really diverse: it’s an LP both for traditional B&S fans and non-B&S fans, especially songs like ‘Stay Loose’.

(SM): “We’ve become a better band and when you get to that stage you can stop and pause and decide to be freer with the music. ‘Dear Catastrophe Waitress’ is a pay-off for the group sticking together for so long. I can now take a song to the group and they know exactly what to do with it. I woke with ‘Stay Loose’ and ‘I’m A Cuckoo’ in my head the way it actually became and the only reason I heard it that way was because I knew the band would be able to do it whereas at the start I would have a fixed idea based around my acoustic guitar. There would be a lot of teething problems, whereas now it’s really exciting”.

(DiS): Why did you start doing interviews?

(SM): “If anyone says: ‘and at this point I would do such and such’ it’s not true. I mean fuck it - everyday you’re just so lucky that somebody gives you money to make another record. At the start it just felt that everything was said in the records and it’s not necessary to do press, but I like communicating and whereas it would use to annoy me when people would chop things up, now I find it quite funny and I don’t really care”.

(DiS): Do you think B&S are beginning to shed the twee association?

(SM): “I think we will throw off that eventually, but it doesn’t bug me. It’s amazing that all that stuff exists and I might moan about it, but I like the sensibility and still go to the clubs. I never thought we would attract the people we did and was constantly surprised by the people who would turn up. For me there’s a line and on one side of the line was cerebral, literal pop like The Smiths and The Go-Betweens and on the other side was C86 and bands on Sarah Records and I couldn’t stand that stuff – and this is coming from the ‘indiest’ person in the group! Jackson was into the Beatles, the Stones and Elvis, Richard was into snooker and Stuart David wrote three novels and liked (with affectionate incredulity) Japan, Sarah was into Sonic Youth and Isobel loved Lee Hazelwood and Nancy Sinatra!”.

‘Books’ is out 21st June on Rough Trade.