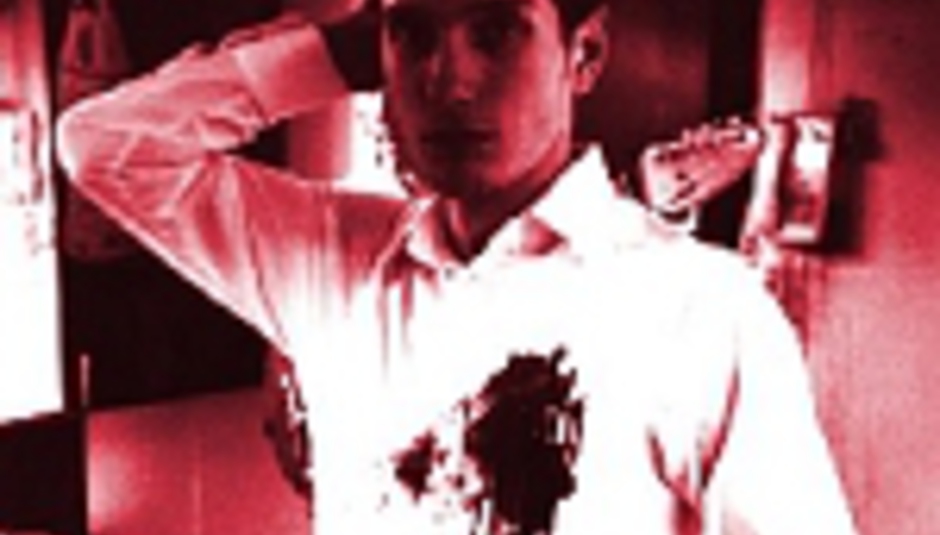 by [redacted] April 26th, 2004
If there’s one thing I really hate, it’s being totally and utterly wrong about something. In a review of a gig of theirs back in January, I remarked “They don’t have that one song you leave humming when they’ve finished.”

A CDR of ’22 Grand Job’ popped through my letterbox earlier this month. It was instantly recognisable, from the arpeggio riffs to the handclaps and the lines “bloke in sales likes her too/ What am I supposed to do?/ He’s earning 28 and I’m on 22”. A subsequent show, my third Rakes live experience, on the night of this interview, had more songs implemented in my head.

One recent fanzine review claimed a “major label bidding war” for the band has erupted. A slight exaggeration perhaps, but it’s easy to see why any major would want to jump on what they presumably see as The Next Franz Ferdinand. They’re certainly as charismatic as the Scots four-piece, if not more so, equally as able to do the homoerotic onstage moves like Franz in that camp ‘Matinee’ video. But The Rakes are far more punk (start your own “what is punk anyway?” discussion below) and there’s something distinctly English about them, be it the storytelling lyrics (more on that later) or front man Alan Donohoe being likened to tragic comic Tony Hancock.

Alan feeds me a story about how they met on a Ryanair flight to Amsterdam, which Matthew was supposedly working on. “Lasse was at the front causing a bit of trouble and me and Jamie had to get in there sort it out.” This is a different version of the story Steve Lamacq got on BBC 6 Music. Their biog simply says they’re “childhood friends.” One thing though, is that they’re all one big happy family.
M: “I’m the granddad. I’m always the granddad.”
L: “We had some pictures taken of us and someone asked if Matthew was the dad.”
M: “Yes, I was just ‘dad’ back then. One generation less at least.”

How did the single with baby label Trash Aesthetics come about?
M: “The guy had seen us play and had just put out the Bloc Party single. He’d had quite a bit of success with it and wanted another band as good as them. So he picked us.”
Do you think you’re as good as them?
All: “Never heard them.”
J: “We’re probably better.”
L: “Well we’re kind of different music to them so it’s hard to say. Are we better than Kenny Rogers?”
M: “No, at the end of the day! Kenny Rogers is pretty good.”
J: “We’re all very modest about how good we are but we all think we are the best band in the world, basically.”
M: “Are we? We’re modest, and according to Steve Lamacq we’re a mod band!”
A: “I don’t know what that means though. I don’t really know mod songs.”
M: “It’s over quickly.”
J: “Laconic.”
M: “Concise.”
L: “Everyone says it’s ‘angular’. What does that mean? Anglo-Saxon?”
M: “I’m the angular one.”
A: “And this (pointing at Jamie) is the round, obtuse one.”

Got any rivalries with other bands we should be wary of?
J: “Nelly.”
M: “We have one with Plastic Heroes, who we’ve never actually heard or met. They don’t know it yet.”
A: “We just wanted to make it up to start the media frenzy.”
L: “They had the worst picture I’ve ever seen, in this rubber frame.”
A: “But I’m sure they’re lovely people, I just haven’t seen them.”
M: “When they get to No. 1 they can laugh at us.”
J: “They’ll probably beat us up.”
OK, so who do you get on with then?
L: “A Brazilian band called Wry are quite nice.”
M: “We’ve been bracketed with Art Brut.”
J: “Art Brut told us last night that we’re the only band all five of them like.”
M: “Well that’s good, cos they’re all into different music! Five fans, brilliant!”

At this point, it dawns on Alan that there might be a third band playing the gig with them tonight – it’s being headlined by the aforementioned Bloc Party. When I point out it’s Komakino and “they share management with Hope Of The States,” Alan has only a blank look on his face.
A: “I don’t know Hope Of The States. Are they like The Beatles or something?”
M: “Bear in mind with Alan, that he said to me the other day ‘I was watching CD:UK and there was this band on called The Zutogs or the Zutings. They’re brilliant!’”
L (bringing to conversation back on track): “Every band we’ve played with we’ve got along with. We’ve never had a clichéd fight with anyone.”
Boring!

The band’s lyrics, when not hidden under muffled PAs, are a large part of their appeal and something they’re proud of. “We’re keen to push the lyrics,” explains Matthew, “cos it’s summat we’re quite proud of. The subject matter we deal with is quite diverse - it’s not polemic, it’s just social observations, ranging from that to made-up stories reflecting a different point of view. Like ‘Strasbourg’, a song I wrote half of, is about people leaving the Eastern Bloc in a time when there WAS an Eastern Bloc, and coming to the west, and finding there’s challenges everywhere.”
Any lyricists in particular you’re influenced by?
A: “I’m quite a big reader so any lyricists in particular I couldn’t really say. I dunno! I couldn’t say, I swear to God. I quite like Peter Carey the author, and I don’t know any lyricists that are as good as… me! So I’m my favourite lyricist!”
M: “We’ve got a different approach to lyrics, that’s the thing. Mine tend to be a little more abstract, with a dream, where Alan's are commentary and more personal.”
Do you have a competition to see who can write the best?
A: “Well usually I’ll have an idea then he’ll have an idea and we’ll have an arm wrestle at which idea is the best.”
L: “The way I see it is that it’s more of a collaboration.”
M: “Yeah, between me and Al…”
L: “But also between us two.”
M: “But you don’t do anything!”
Jamie sulks.
L: “But basically, if we don’t like it (suddenly realising)… it’ll still get put through.”
A: “Me and Matthew will come up with lyrical ideas and Matthew will come up with the guitar stuff, then we’ll bring it to the studio and present it to the board members (indicating Jamie and Lasse) and if they like it then we’ll build it up.”
L: “We’re not called Alan & Matthew And The Rakes, or Alan & The Rakes.”
A: “We should be though.”
M: “Well that’s where there are arguments – which should come first, Alan or Matthew?”
A: “Alan & The Matthews.”
J (hopefully): “The Jamie Smith Band.”
L (being the sensible one, again): “We’re a gang, we’re all together.”
A: “I don’t think there’s any particular ego in it. Lasse’s written a song as well.”

Do you think this lyrical storytelling is a particular English trait – examples being The Kinks, Blur, Madness…
M: “The Specials?”
Yup.
A: “I was at a party once and this gay fella put on his favourite album, Kate Bush, and I thought ‘oh what…’ Her singing is quite good, I’d never really listened before. He said he said this song, ‘Rainmaker’, was about the experiments the government did during WWII in Dorset or something where they seeded the clouds with heavy elements to make it rain, and it caused loads of flooding and killed people in this village. I thought that was amazing, a really good song and there’s another level to it. He totally sold it to me. I never bought her album though.”
M: “It’s so good to hear that track, just the vocal in it. I’ve heard that story about that track actually.”
A: “They were going to use it in WWII as a weapon.”
M: “How? How is rain a weapon? Flood them?”
A: “A weapon of mess destruction.”
M: “It would be. It’s a good excuse for not going to work – ‘I couldn’t get to work because there was a weapon of mass destruction above my head’.”
A: “So I don’t know if that’s a traditional thing but for me that’s a good story, it’s interesting and it’s set to really good music.”
J: “Why don’t they use that in a third world country where there’s a drought?”
A: “Ahhhh.”
M: “I hope you got that on tape!”
A (menacingly): “And that’s for Tony Blair.”

Finally then, how would you defeat your enemy?
A: “Are we still talking about rain?”
Turkish Phil, The Manager: “ARE YOU LOT TALKING ABOUT THE WEATHER?!”
L: “I’d probably throw Phil at my enemy.”
A: “It depends what they did, really. Perhaps white noise treatment; let Jamie play his bass for half an hour. That’s quite enough to make any man mad.”
J: “Failing that, we’ve got a mate called Toby who’s quite hard and a yellow belt in Judo.”
A: “Yeah, everyone’s got to have one hard mate.”

And with that, the now very-much-in-demand band are dragged away from my clutches to their next appointment. We shall meet again soon.

’22 Grand Job’ is released on May 3rd on sexy vinyl. B-side ‘Something Clicked And I Fell Off The Edge’ is also set to appear on Fierce Panda’s next 6-track compilation EP, ‘On The Buzzes’.