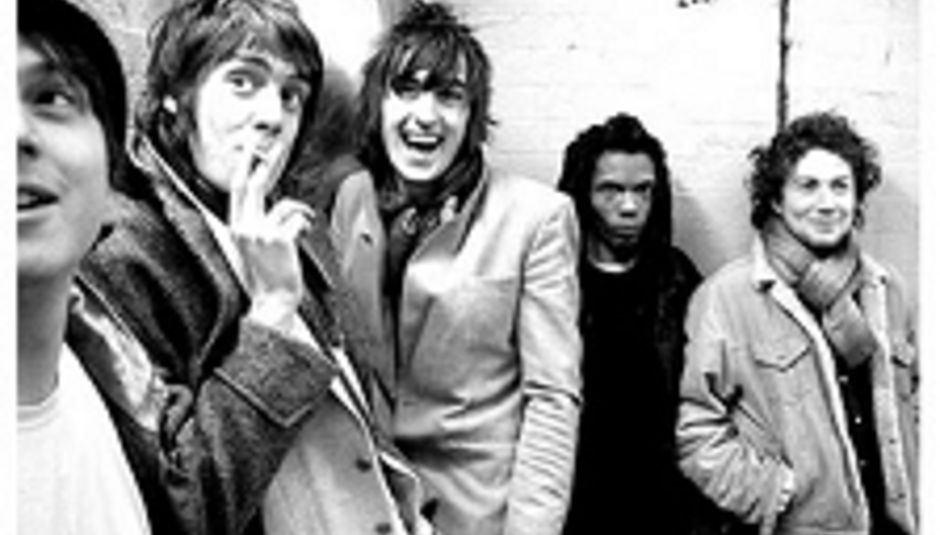 by [redacted] April 20th, 2004
Dave Ashby, lead singer with swashbuckling rhythm ‘n’ blues terrorizers Ludes, has just moved into a squat. It’s not that he can’t afford to pay rent, he says, it’s because he can’t afford the deposit on a new place. But he is pleased. It’s exciting. There is a piano and a stereo, and the place is “massive” – perfect for recording (“but expect piano ballads”). He’s just spent “fucking 50 quid” on a huge lock, and intends the invite Macauley Culkin round to guard the place while his band plays that night in Camberwell and the rest of the squatters join them for the night’s entertainment.

Ludes are signed to Double Dragon, the label run by Ash’s manager, and have just signed a small publishing deal with Sony. Their next single isn’t due ‘till August, with the debut album pencilled for February 2005, but seeing as DiS has said plenty of nice things about Ludes in the past and they’ve just got themselves a snazzy new website, we thought it was time to get some words out of them.

“A publishing deal is just like a student loan. You get two grand, then you have to spend it. On booze.”
You’re not au fait with the music business then?
“We met them once and they took a photograph of us.”
“Did you meet them?! I’ve never met the music business once! BASTARDS!”
“How many of them are there?”
“About three.”
“Do they work in a team?”
“It’s all of them! They’re out to get us!”
“It’s the ministry of THEM!”
“They want us all to fail. But we’re gonna WIN.”
How are you going to destroy the music business?
“With a great football side!”

DiS is calling Dave on his mobile a week after our previous attempt at interviewing the band (see above extract) following their “worst gig ever” was thwarted by a slight overdose of alcohol consumption and “well, someone gave me a handful of mushrooms before we went on.” Just so you know, like.

Ludes started roughly two years ago. Drummer Chris Morris (no, not the one you’re thinking of) has been playing now for nine years, with Ludes his first serious band. Bassist Dom Peach was the last to join the band. Before that, James McCool (rhythm guitar) claims to have met Matt in the park: “He was on the swings; I was on the seesaw. I said ‘the swings are shit, mate,’ so he came on the seesaw with me. Dave actually conned us when we met him. He had a band and him and his dad were collecting money on the door. Me and Matt went up and played ‘Johnny B Good’ then after the gig asked for some money, and he said his dad had got it.” Dave claims to have given them a fiver.

The story doesn’t really begin until Matt and Dave were reunited in Camberwell College Of Arts, where they studied graphic design (“I’m well into hand-drawn typography actually, which is a bit sad,” admits Dave). After getting the band into the swing of things, the two of them dropped out last year. “We were promised a publishing deal from Warners and it was just about to be signed, so we dropped out. They pulled out the day before we went to sign, which buggered up things a little bit. But we soldiered on cos we knew what we were and where we were going, so we just did bits and bobs like working in bars, painting and decorating, odd jobs. What else? What did Matt do? I have no idea. Chris has never worked so he didn’t have to change his life at all. James just sat inside a flat for six months, eating bread. We managed to prize him out with a record deal.

“I was majoring in illustration. When I was at secondary school the only things I was good at were art and English. When I did my A-levels I did those, and got told to leave the English course. They told me I wrote like an NME journalist and not as an English literature student. That’s quite insulting, as well. But at the same time, I think the teacher was quite old and hadn’t read the NME since the ‘70s, so maybe she wasn’t trying to insult me.”

Does going to art college make you ‘art rock’ then? “Not really. Art rock’s a bit of a contradiction in terms. Art rock is music they’ve designed, they’ve sat down and listened to disco anthems or whatever, and think ‘How can we make this arty but still sell loads?’ If art rock really was arty then you wouldn’t have heard of it; it would be obscure. Art rock’s a stupid thing.

“I don’t know what you call us. You know when people in the ‘60s tried to imagine what the future looked like? That’s kind of what our music’s becoming; using old materials to make futuristic music, but not with computers and shit, with real guitars. Futuristic melodies and rhythms and stuff like that. Of course everything goes back to the root of its origins. We say ‘swashbuckling rhythm and blues’ cos rhythm and blues is like, well, y’know, rhythm and blues! And swashbucklers are adventurous. So we’re adventurous r’n’b music.”

Do you think there’s anyone else around doing the same sort of thing you’re doing? “YEAH, in a way, Dogs Die In Hot Cars – I fucking love them. They’re quite new wave. You had the new wave of punk but now there’s the new wave post punk sort of thing, and there’s a few bands like that who sound like Dexys Midnight Runners or The Stranglers, but a bit more modern, with like, baggier clothes and haircuts.”

Speaking of clothes, Dave says he spends all his money in charity shops. Oh, and on beer. But does he think he’s defining the sound of young London? “I’d like to think so. If you’re going to define anything then that’s quite a good thing to define. I wouldn’t like to define the style or clothes of London, as that’s nothing to do with music. Just playing with other bands and knowing that they’re getting bits off you and you’re getting bits off them… I still don’t feel there’s that much of a community yet. The people we do the Brixton Windmill with we don’t hang out with in the week, but I’d like to see something more like that happening. People go to nightclubs and spend shitloads of money when they could just open up a fucking warehouse and put on raves. With bands, people have started doing that outside London and it’s starting to happen a bit more inside London. That’s what I’d like to do. I wouldn’t to just do music and live my life - people have got to do more. You’ve got to try and create more of a society out of it, with music as your tool.”

You’ve been doing your own club, haven’t you? “Yeah, we’ve been doing Ride ‘Em And Booze at the Joiners in Camberwell, which is basically an exclusive drinking den for heavy drinkers. Mostly it’s full of Camberwell students. It’s a £1 on the door and we get £100 behind the bar. It’s basically so we can go out and get pissed for free and play the records we wanna play. It’s perfect! Everyone loves it. I was on a bus and saw someone see the poster. He said ‘Awww, Ride ‘Em And Booze, that sounds wicked. I can’t wait until I’m old enough to drink!’ We’re starting ‘em young… getting the idea into their heads.”

Before I called you, I looked at your messageboard and Danny from Metro Riots was asking people what their best ‘street heckle’ has been. So what’s yours? “I’ve had fucking loads. When me and Matt first moved to Camberwell, we were standing outside our flat about to go in and a load of people shouted ‘hippies’ at us. We had plastic toy guns on us we’d just bought, and started waving them in the air. The motherfuckers soon left the scene. ‘Get your ‘air cut’, I’ve had that. And I reply ‘what, and look like you?’ That was in Soho - a bunch of big fat skinhead, t-shirt types went past in a metro and shouted at me. There’s been other things like ‘girlface’. General comments that don’t really bother me at all. You only react to the way I look because you wish that you could do that and look the way you want to look instead of looking like all your mates.”

Ever got into trouble with people like that or people at your gigs trying to ‘start’ something? “A couple of times. Generally I just make them feel really stupid for starting on me, without using violence. A guy at a gig once said ‘you’re a really great band but you’ve got a bad attitude,’ then tried to fight me. I said I’m not going to fight you just because you think I’ve got a bad attitude. There was a makeup brush lying around so I stroked it on his face and he got all upset and angry and tried to hit me. As I left I went ‘see ya mate’ and shook his hand, putting the makeup brush in his top pocket without him noticing. I got him back in my own way. Non violence! You don’t learn anything from punching people in the head. You don’t learn anything about how people’s minds work.”

He is mushroom and alcohol-free today. But I still can’t get it out of my head that Matt and Dave, at least, live some kind of ‘Withnail And I’ lifestyle. I ask what’s the worst drug he’s taken… “I smoked a daddy long legs once, which was a bit silly because the venom in a daddy long legs is apparently the most deadly in the world if you inject it. It’s within them.”
Right, OK.
“Yeah, smoked it in a little pipe.”
Well, let’s not talk drugs then.
“Drugs are boring anyway. I’ll tell you what isn’t – squatting. It’s the most fun in the world, cos it’s free… It’s such an adventure doing this. You’re not breaking the law - it’s a civil matter - it’s just fucking weird.”

Let’s just hope Culkin remembers to bring the grease for the stairs.