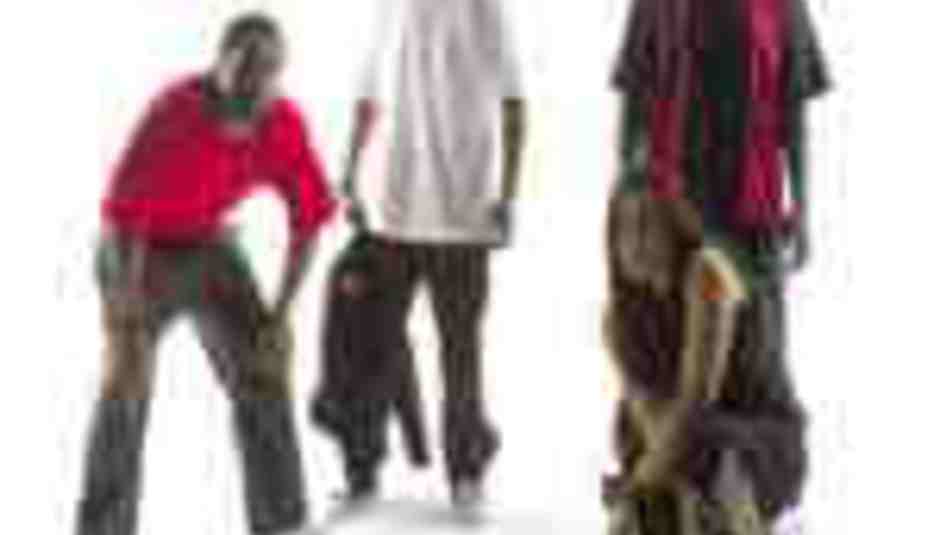 Arrested Development and the Spooks are co-headlining a tour with support from the **Lifesavas. Arrested Development, although best known for their nineties hits 'Mr Wendal', 'People Everyday' and 'Tennessee', from their debut album, ‘3 Years, 5 Months and 2 Days in the Life Of…' But Arrested Development have been very busy since then. The Spooks consist of Booka T, Ming-Xia, Joe Davis and Hypno. They first hit the scene in a big way in 2000 with the album 'S.I.O.S.O.S., Vol 1'. The single, 'Things I've Seen' was one of the most played song in Europe in 2001.

The tour saw the groups play three days in a row at the legendary Jazz Café. I saw the third and I was impressed with what I saw. Admittedly, my knowledge of the support act, The Lifesavas, was non existent. However this didn’t stop me from swinging my butt. They perform positive, conscious hip hop but with more emphasis on enjoying yourself than on preaching. With tight flows and nice beats, suffice to say that after their show I made a mental note to find out more about Lifesavas. The Spooks’ show was an eye opener. Ming-Xia’s voice is even more captivating on stage than recorded. They are clearly seasoned veterans of the live stage, they have so many vocalists competing for time and stage presence yet they never miss a beat, always on cue with perfect timing. And Arrested Development are equally as captivating. When Speech took the stage the crowd went insane. On stage, Arrested Development are just two guitarists, one DJ and Speech. Although the new songs were well received and filled with the same positive ethos that the classics contain, they could never really compete with the combined nostalgia and euphoria of hearing the baseline for 'Tennessee' played by a live bassist. I caught up with the Spooks at the end of their third performance.

So how did the Spooks meet? Joe Davis explains: "Well me and Booker T grew up together. We've been involved in hip hop music since we were little. That was our life. Then about ‘95 – ‘96 he approached me about an eleven man crew. I said eleven, yes! The whole thing was we'd put our money together and put our ideas together and make some demos to get a deal. It worked for a minute but then cats had their own agenda, they wanted to go their own different routes, no love lost, we just had to make a decision as adults. So it ended up being just six of us and by the time the deal was coming it had been 3 or 4 years as Spooks. We got the name from a Blaxploitation movie and a book.” This was ‘The Spook Who Sat by the Door’ written by Sam Greenlee.

“The reason we compliment each other is probably the reason why hip hop is so successful. It applies any and every sound and style of music and just strips it down, builds it up and gives it the attitude of the inner city. The hardness, the truth, the movement, the rhythm and everything. That’s the luxury of being a hip hop artist, you can apply all these things and make it your own. That’s what’s going on in Spooks. We all have different musical tastes, different upbringings, and mutual respect for each other's talent and ideas. When all these things combine you get what the Spooks have to offer, which I hope is good hip hop music!”

What does Joe Davis feel that the Spooks bring to hip hop that nobody else does?

“There aren’t as many hip hop groups of over three members that are actually holding it down in what we feel is the purest form of hip hop, hopefully we’ll see more of that, like we used to. The melodic element of Ming-Xia, she’s definitely a member of the group, she’s not a guest vocalist. And the fact that we tell whole stories, we come from different angles and experiences in every song that we write, but in particular songs we write about situations and events, like Karma Hotel and Things I’ve Seen."

Booker T adds his own opinion on what makes the Spooks different.

Where did you hone your talent?

_“With myself and Joe Davis it was battles and contests. And basement and outside park jams. I know J started before me, like around ’81, I wrote my first rhyme in like ’82 and started a group at the end of that year. Ming was doing plays, always in plays at high school, theatre, musicals.” _ So they were all performing a long time before they got famous. Booker T continues: _ “We weren’t sitting in our rooms rhyming in the mirror, it was out in front of people. You gotta get booed, you gotta get booed, whatever, y’nah mean? Or you get praised.”_ Fair enough, the best rap careers were built on the foundations of the live stage before they were cemented with singles and albums.

"We have our second album out, _'Faster Than You Know'. The first single featured Charlie 2na of Jurassic 5. The second single is 'Change'. And right now is the Insomniac Tour. We named it that because you can’t sleep on us. But it turned into the tour that doesn’t sleep!"_

Backstage we are joined by DJ Dice and All Purpose from Philadelphia. Joe Davis explains their significance to the group. “We met Dice through another DJ called Ghetto. Dice was a DJ for a group called Prophets of the Ghetto. All Purpose is a main member of Prophets of the Ghetto and a group called 84! Freestyle specialist, look out for him. He’s also on our album, featuring on a song called Eulogy.”

This was the last of three nights at the Jazz Café so I asked Joe Davis how life in London was treating him?

“When we come to Europe we do our best to come to London. The hip hop scene is good here. The crowd is engaged and the response is incredible. Y’all gave us our first plaque and were largely responsible for the single going platinum and we always jet to London for the love the fans show.”