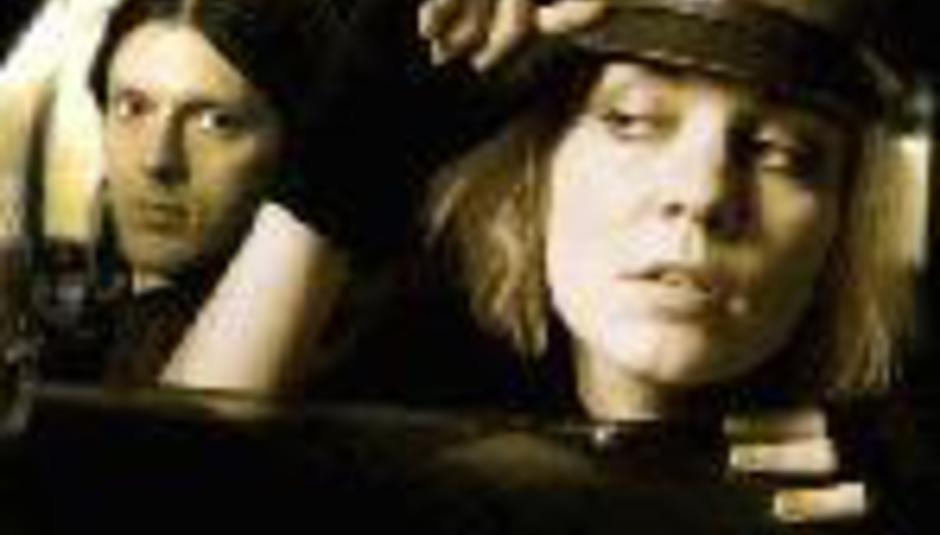 by Mat Hocking February 10th, 2004
My stomach’s stirring. Fluttering even. Not in an ailing, off colour way. Not in a ‘wish-I’d-skipped-the-curry-before-the-gig’ way. It’s stirring with a glaring, tauten rhythm, absorbing thick pulsating beats, thumping and reverberating inside with a threatening intent; a blurred lineage from Skinny Puppy’s industrial-trash milieu and the savage razor-wired belligerence of Pantera. I stand transfixed as the breath from my lungs is sucked outwards into the smoky atmosphere and the violent metallic beats battering me into submission transcend gloriously through a fiercely seductive feminine aggression. Like an embryonic Tarrie B flexing her muscles through the sassy psyche of Ms Pink herself, these righteous female tones demanding your attention, stirring the blood to boiling point as she clasps ahold of your sanity and wrings it dry of any preconceptions gathering dust in your mind.

This is Velcra. Or rather, that was Jessi, doing that to me, making me all giddy and excited about heavy music again. Sorry, I meant metal music. Yeah that’s right - female-fronted \m/metal\m/ (Without the ‘nu’). The kind of stuff that explodes with a feral intensity, entrenched in the primal beat-heavy rhythms of trance and goa whilst fuelling the fiery temperament of Jessi herself, a girl whose bite relies less on a Neanderthal bark than her pure full-bodied voice that is so vital to heavy music today.

“You have to understand I come from the land of fucking Viking metal where Dimmu Borgir and Children of Bodom and that kind of stuff is really huge,” she says of Finland’s biggest musical export. “And I have nothing to do with swords and dragons and fucking fairy tails so you know, for me, anything that is a little bit fresher, that stretches towards, say, using loops and samples other than operatic female vocals and stuff like that. For me, that is all pretty much new metal, a kind of new school of metal.”

Jessi’s the diminutive type, with ruffled blonde tresses that curl behind her ears as she leans over a table in The World’s End pub in Camden. It’s pre-stomach-stirring gig and, in contrast to the vanity-hugging banter and inner demon-exorcising I’d most probably be enduring with most nu-metal bands, we’re discussing George Orwell’s ‘1984’ and French social-theorist Jean Baudrillard’s landmark book “The Gulf War Never Took Place”. Of course, the Gulf War did take place, but it’s the way the media has transformed people’s perceptions of reality that is the subject of our conversation.

“Their information is actually… it’s them who are the subjects and they don’t know it without actually watching it on telly and getting the stories,” she muses. “It’s all just kind of detached until it’s wrapped up nicely and given to people in the form of media. And it’s the same with music, like a lot of stuff is happening but it’s the way it's brought up by the media and wrapped up and given. That’s why people need to start fighting it and believing that it’s worth fighting.”

So I take it the song ‘Big Brother’ isn’t inspired by that Godawful TV programme of the same name then?
“No, it’s erm… it’s about taking issues and handling them really sloppily. Like for example a lot of regulations and laws and stuff protect us and make society a better place but at the same time people don’t think about that and they’re like, ‘oh, this is our national safety’ or whatever and you’re not allowed to do this or the other and it becomes repressing again, and it’s like, where does that fine line go between keeping us safe in a nice, good society and on the other hand just not allowing people to think for themselves?”

Wow. Now this is a girl who’s, like, in tune with real issues and stuff; issues that perhaps might peruse the mental channels of young people if they weren’t so force-fed stuff about “keepin’ it real” and “feeling drrrty” all the time. It’s a fresh approach that underlines Velcra’s music as well, their incorporation of dance beats somehow retaining an element of authenticity that is so remote from the Pro-Tooled mish mash of Linkin Park et al.

“OD [guitarist] and our new DJ, DJ Freak are heavily influenced by goa and trance and stuff like that”,

she explains. “I think the very core of industrial [music] is the fact that it’s danceable. I mean, obviously, what would be a better place for that than dance music itself and just kind of take good beats from there?”

Indeed, it seems Velcra have made a conscious effort to stay as far away from the stale European metal scene with it’s “guitar heroes on the mountain top playing against the wind with their tight leather trousers” as much as possible. Which is why ‘Consequences Of Disobedience’ is quite possibly the freshest sounding metal release of last year. Seriously.
“I can see it all kind of growing,” she smiles. “We’ve done a lot of work for the past year in Finland and it doesn’t have to stop there. We are now writing our second album and I feel so much wiser than I was last time. Me and OD were always there, from the sleeves to the mastering, learning the whole process of what goes into making a whole album. I’ve learnt to listen to music in a totally different way, which is good, but at the same time its nice to forget being so analytical.”

The band are currently recording their second album in Finland, after which they head over to Germany for a tour with local metal heroes Oomph! with plans to tour here again in the very near future. In between all that Jessi is also studying an art degree in North London, bizarrely enough, at the very university where I’m at, and where I’m urged to try out her rather intriguing metal box. "It’s cool", she says, all excited. "You stand in there and it just kind of resonates all the ambient sounds. It’s wicked, you’ll have to try it.”

Just you try and stop me!