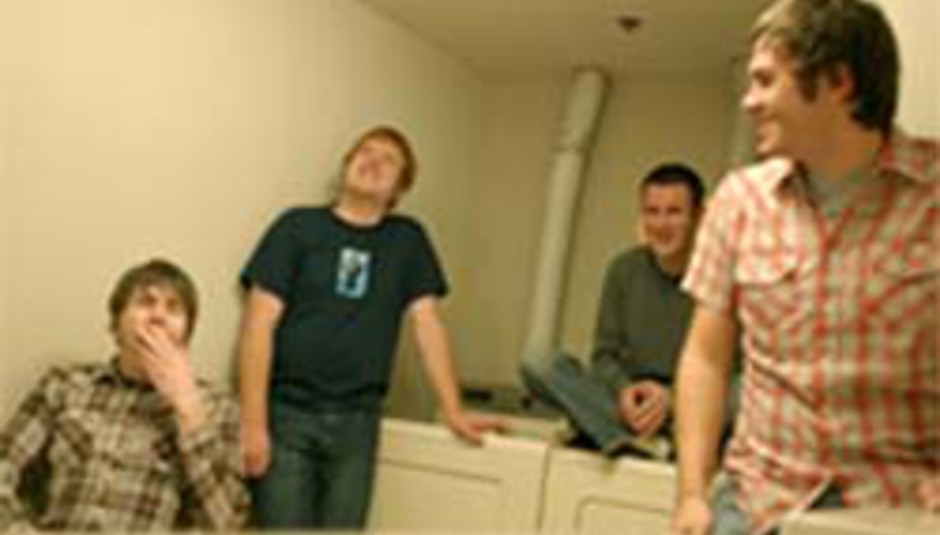 Go Wild In Our Country!

Go Wild In Our Country!

by Tom Edwards December 2nd, 2003
What do you get when you fall in love? If you’re a member of west-coast upstarts Limbeck all you get is a broken heart. That and the inspiration to write disquieteningly breezy pop tunes that evoke head-over-heels joy and sour grapes in equal measures.

When you listen to Limbeck play, you get to fall in love all over again. And boy, if they come off well on record – and they do – then they fucking rock in person. I’m on the balcony of the Astoria on the penultimate day of their very first UK visit, and the band are busy proving just how they snagged such a prestigious support slot. By the time tour buddy, The All American Rejects’ Tyson Ritter, bounds onto the stage to provide harmonies for their showstopper, ‘Julia’, the crowd are nearing hysteria.

Let’s rewind to an hour before the show begins. I’m sitting upstairs in the venue’s famous(ish) Keith Moon bar with one Mr Robb MacLean, the intensely likeable frontman of some random Californian band called Limbeck. They’ve not had a record out over here so far, yet somehow they’ve blagged their way onto one of the most anticipated tours of the year and into the hearts of the few journos who have been lucky enough to get their mitts on their new album.

So, uhm, how’d you manage that then? I ask. Fair enough question, I reckon. Turns out they played a bunch of dates with the Rejects Stateside a couple of months back. (Doh! – research ed.) Strike one for the journo wannabe.

So then I decide it’s time for a tactical regroup and begin quizzing them mercilessly about their tour escapades. “Britain’s cool,” the singer jokes, “any band has a good chance over here cos it’s such a small place.” Right, but what have you been up to? So to speak. “Errr… well, we’ve been trying out your food. Someone gave us beans on toast yesterday. That’s good stuff.” OK, that’s it. I give up.

After a depthy comparison of our feelings on infamous northern cuisine black pudding, via the enlightening route of haggis and steak-and-kidney pie, we near the end of our chat. As a last ditch attempt to salvage something in any way relevant from the encounter, I ask the singer who he’d choose as fantasy touring partners. He goes for wistful alt.country forbearers Wilco. “It’d have to be them. They’re really on the same wavelength as us; we’d love to go on the road with those guys.”

So there you go. Limbeck laid bare for all to see. As the band heads off for a final sound check, I squeeze them on their plans for a return visit. They offer me February and I accept. After all, it’s only fair they get a couple of months off to recover from our miserly British diet.