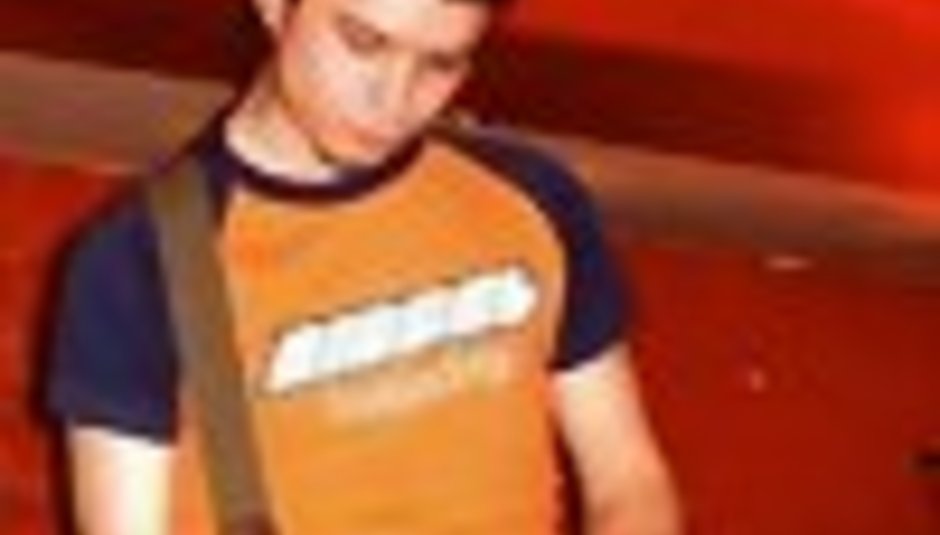 by Kate Price October 10th, 2003
In the same way that some music can make a person have an uncontrollable urge to dance around, singing along at the top of their voice, some music can lure the mind into a state of depression and melancholy and some can induce anger and aggression, there is a certain section of music (which for me is admittedly scarce) that whisks the human mind off to a completely new and surreal unworldly dimension; music that spins around the head and submerges the listener in a world of pure euphoria and ease; music that momentarily frees the mind of any stress or concerns and cocoons it in thick sheets of pure escapism. Music currently being defined and reshaped by bands such as Mancunian masters in the art of "fucking sounds up", Oceansize.

"It's not immediate at all" sitting in an eerily empty venue, The Rig at Rock City, the warming Yorkshire tones of front man Mike Vennart explain why Oceansize's music seems to be slowly growing on the minds of the music industry and press, "I like to think that it's quite 3-dimensional. It's multi-layered and I think you need to listen to it a lot to get the best of it. I hope that there's something new to discover in it every time you listen."

Last summer, after three years of experimenting as a band and shopping themselves around to various labels, they secured a deal with Beggars Banquet (Biffy Clyro, Tindersticks). "At the time signing a deal seemed like the hardest thing in the world; when no one was biting and I'd sometimes start to think 'shit, maybe we're not that good.'" Ebony eyebrows arch and a pale forehead scrunches slightly with concern at the thought of giving up, "I remember saying to my Mum years ago 'if I don't get anywhere with this band then I'm never gonna get anywhere with anything' because I knew everyone in the band was so fucking talented and so into what they do."

After years of hunting for some real label interest, all at once two of the countries most renowned labels made their bids to sign one of the UK's most exciting underground acts; Beggars Banquet and another more commercially angled company. "It'd have been a really cheap thing to do!" A look of contained disgust is visible in the singers face and posture as he explains why they decided to turn down the other offer. "We want to do things our way. We know what kind of band we are, we know where we stand and we known how we fit in. It's not up for compromise." Obviously irritated, in almost disbelief Mike scorns, "The guy there accused us of having a 'youthful anti-commercialism' which is the most patronising thing you can say to a band like us. Just because we don?t want to suck cock and go on the telly and do adverts!"

"With Beggars, we insisted that it was absolute artistic control. They've not had us doing anything that we don't want to do." Fortunately, finding a record label willing to give them the deal they could only dream of has meant that their debut album, 'Effloresce' is something that Oceansize are truly proud of. "Some of the EPs we'll sit and listen to and be so embarrassed because we cant actually believe we allowed them to be released, but we're all really happy with the album."

After a number of EP releases and an eventual album release to critical acclaim last Monday, the bands labour of love and lengthiest masterwork to date is complete. "We recorded it a couple of months ago but it wasn't until recently that it came through with the artwork. I couldn't wait to hear it and feel it as an item that someone's going to buy" Voice echoing around the silent venue, he continues, "We cant put out any more singles/EPs off this album because you're only allowed so many. We don't really give a fuck about that anyway. We know that whatever song we put out it won?t get any sort of commercial success."

So after an accumulation of three years work climaxing with an abundance of tours and magazine exposure, it's back to the drawing board. "Writing songs is an uphill struggle. There're 5 of us and no one comes in and bosses everyone else - it's a five-way collective." Creating such complicated, layered music amongst so many people doesn?t happen over night, "Someone'll bring in a riff and then that'll get completely bastardised. You've really gotta leave your ego at the door and let people have their way. You always feel much happier with the end result that way because there's a little bit of everybody in it."

Without working the indier-than-thou too-underground-for-the-underground thing that makes so many bands seem intensely tedious and self-righteous, Oceansize manage to come across as one of the most genuinely passion-orientated bands around and it only takes a few listens of 'Effloresce' for that to shine through. They've been around for years and it seems certain that they will be for many more, whether you notice it or not.

A shattered and nervous pre-album-release Mike ends the interview, "Our only aim is to keep getting better". This could be explosive!