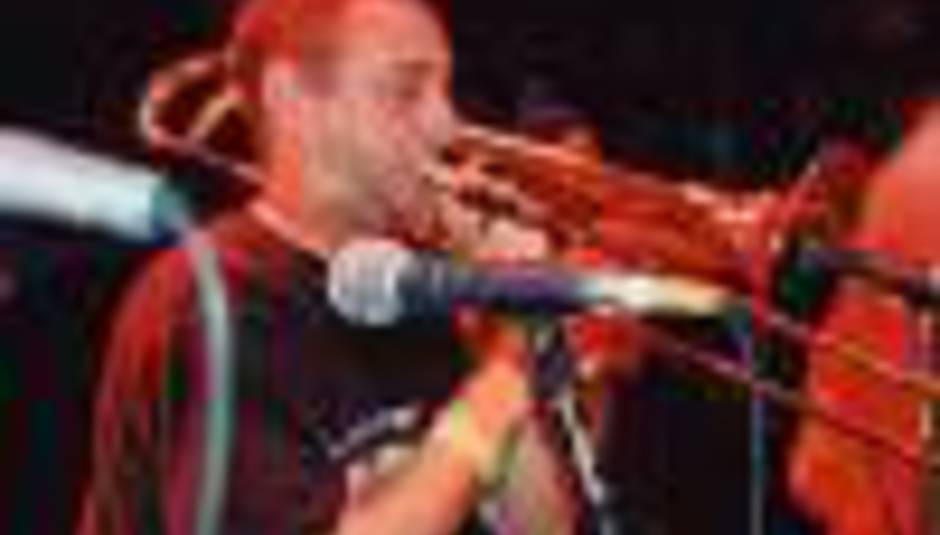 by Kate Price September 19th, 2003
Over the past couple of years, Less Than Jake have become one of the biggest bands in the world, replacing legendary acts such as Green Day as the bare minimum name in any punk kid’s CD collection and getting themselves a reputation as one of the most insane live acts on earth. Since becoming the main contender in the play lists of any cheeky ska club night it’s easy to forget that Less Than Jake have been around a LOT longer than it would seem. After 10 years, a ridiculous amount of album, EP and single releases, various line-up changes and hundreds upon hundreds of gigs, I meet up with brass-master, Buddy in the guest area of Leeds festival to chat about all things LTJ!

He explains their relatively sudden appearance and consequential domination of the UK punk scene over the past few years, “unlike most bands who come over here from America play 3 dates and then go back, one year we just came here 5 times and played all the little places and built ourselves up much quicker.” continuing, “we try to tour as much as possible and play as many places as possible and I think that’s the best way to pick up fans – I think that’s definitely how most people get into our music anyway.”

Certainly for a band renowned for such fun, light-hearted, exciting live shows touring must be the most important factor! This time last year at the very same festival Less Than Jake famously had the whole crowd watching them play the festivals vast main stage turn around and run in the opposite direction to form one of the most impressive circle pits ever caught on camera around the soundbox. This year, although amusing as ever their set was considerably less hectic. Are they getting old? “I don’t wanna sound cocky but it’s almost like legendary here to do something crazy – everyone hears about it and that circle pit last year was awesome” he grins through lips stained with a circular scar from the mouthpiece of his instrument, “You don’t wanna come back and do the same thing! We’re still trying to make it a fun show but I guess we wanted to play the new songs little more. And we don’t want anyone to get hurt either.”

The bands most recent album, ‘Anthems’ released earlier this year, is one of many ska-punk powerball trips into the psychedelic minds of Less Than Jake. Only this time the band took a far more perfectionist approach, “We wanted to take a little more time with it to revise songs and write more tracks” Buddy glances warily at the audience of fans forming around us to listen to the interview and continues, “we actually wrote 28 songs for it and only 14 actually made the album. By taking more time we were able to let the songs grow and take them out on tour before they were recorded to see how they worked live. We’re really very proud of it!”

One thing that always seems characteristic of most punk-based music is politics as a theme. Propaghandhi, Pennywise, Capdown – they’re all famed for wearing their heart right on the front of their baggy skater shorts and using their music as a platform to tell the world about their beliefs. “I think politics definitely has a place in music. It’s a venue where you can express your beliefs and get opinions to a lot of people because they want to hear what you have to say.” Keeping a diplomatic outlook, he explains, “But we try not to impose our beliefs on other people - we figure they can make decisions on their own. For us it’s more about the music and using the music as an escape from those things."

“Most of the time you’re concentrating on the problems in your life or the problems in the government and politics or whatever and when you come to our shows you wanna forget all that and have a good time for a little while – that’s what we’re trying to do.”

Having toured the world, cheered them up, recorded and released a new CD and then done it all over again… and again… and again more times than you can begin to imagine, what does the future hold for the world’s favourite pez-obsessed lunatics? “Well, after this interview I’m gonna have to get back in my straight jacket and be locked up… 10 years of this sends you crazy!” he jokes with an affectionate grin. “Seriously though, we don’t plan ahead more than 3 months. Anything after that can change – you want that after 10 years, you don’t make plans that are 5 years into the future because anything can happen…”

And indeed anything can. Will the world suddenly get bored and see the band disappear to nowhere? Or perhaps THEY will get bored and exchange the rock’n’roll lifestyle for an office and a nice family saloon car? More likely Less Than Jake will continue pumping out their rapid blasts of brass infused ecstasy for years to come and continue to be everyone’s favourite live band (whether they admit to it or not!). It seems that only time will tell…